Editor’s note: On April 26, 2017, President Trump ordered Interior Secretary Ryan Zinke to review 27 national monuments that had been created or expanded since 1996 and exceeded 100,000 acres in size. Zinke was directed to reassess boundaries and management standards for these monuments and consider alternative uses and local economic development impacts.

In a recently leaked memo, Zinke recommends shrinking four national monuments and changing management standards in six others to permit more timber harvesting, livestock grazing, fishing and road access. Our panel of experts weighs in on his proposals.

Proxies for a changing West

Secretary Zinke’s recommendations, deferential to local complaints, are plainly tethered to a multiple-use philosophy that values traditional economic uses such as logging, mining, energy development and grazing over preserving natural and cultural resources.

This review was largely triggered by complaints from Utah politicians. The state has long felt slighted by President Clinton’s 1996 decision to protect 1.7 million acres as the Grand Staircase-Escalante National Monument without prior consultation. Critics also contend that creating the monument blocked a large coal mine project, albeit one that was tenuous at best given its remote location.

Utah officials also objected to President Obama’s 2016 designation of Bears Ears National Monument on 1.35 million acres in southeastern Utah that the National Trust for Historic Preservation calls “one of the most significant cultural landscapes in our history.” Obama acted only after extensive public consultation, and then only after failed efforts by the Utah congressional delegation to pass legislation protecting the area, which has seen ongoing looting and grave robbing.

Long wary of the federal government, Utah resents that two-thirds of its land is federally owned and asserts that these national monument designations preclude more lucrative mineral development opportunities. Similar complaints about recent national monument designations can be heard elsewhere in the rural West, with regular support from mining companies, timber firms and the oil and gas industry.

Ironically, Utah also proudly promotes its lucrative “Mighty Five” national parks, four of which were originally national monuments that state and local officials strongly resisted when they were originally designated.

Nearly every president has invoked the Antiquities Act to protect at-risk sites, ultimately giving the nation such treasures as Zion, Grand Teton and Acadia National Parks. Federal courts have consistently sustained these designations without concern about their size. In fact, the courts have ruled that ecosystems and scenic features qualify for protection under the act.

If President Trump follows Zinke’s recommendations, monument supporters – including Native American tribes, conservation groups, historians, archeologists and the outdoor recreation industry – will undoubtedly challenge his actions in court. The case will likely turn on whether authority to modify national monuments can be inferred from the Antiquities Act’s silence. Courts may be reluctant to allow a president to second-guess his predecessors, which could invite endless future litigation.

If Trump relies on factors not found in the Antiquities Act – namely, alternative land uses or local economic impacts – courts could find that he has overstepped the bounds of his delegated statutory authority. Moreover, Congress essentially ratified the designation of Grand Staircase-Escalante by endorsing a subsequent exchange that turned some federal lands over to Utah. If Trump moves to shrink the monument, courts would have to decide whether the president can override the congressional ratification.

However, if courts upheld the president’s changes, the door would be wide open for future presidents to regularly reverse their predecessors’ national monument decisions. This would create a never-ending spiral of instability and uncertainty – something that property law has long abhorred.

Under the Constitution’s property clause, Congress has plenary power over the public lands, a power the Supreme Court says is “without limitations.” Congress can convert national monuments into national parks or expand, contract, rescind or modify them. But despite recurrent complaints from western states, Congress has not taken any action, thus implicitly endorsing recent designations.

Moreover, Grand Staircase-Escalante now has been a national monument for 20 years, and nearby communities have experienced considerable income and job growth. This suggests that monument designations are not an economic drag, as they often are portrayed. In sum, this debate is really about a rural West that is in transition and leery of a future that probably rests more heavily on preserving resources than extracting them.

No mandate for logging

President Obama designated the Katahdin Woods and Waters National Monument in 2016 on 87,500 acres of land donated by entrepreneur Roxanne Quimby. Interior Secretary Zinke has recommended that Obama’s proclamation should be amended to allow for more intensive timber harvesting within its borders. In our view, this action is both illegal and unwise.

Under the Antiquities Act, once a national monument is designated, the secretary of the interior has a responsibility to regulate it in order to protect objects of historic or scientific interest that it contains. It is hard to see how allowing more extractive uses squares with that mandate.

Moreover, because of the unusual gift agreement that led to its creation, Katahdin Woods and Waters is already specially regulated to allow hunting and snowmobiling – activities that typically are prohibited in national parks and monuments. Zinke’s recommendation to add timber harvesting would violate the terms of the agreement and the careful balance between uses that the landowners sought.

This land previously belonged to Mainers who desired to create a monument and made a generous gift. They could very well have retained the land as their “sole and despotic dominion,” blocking people from using it and banning all timber harvesting. Even if Zinke’s assertion that “traditional uses, such as timbering …were permitted as part of custom of the local area” is accurate, that historical private use should not motivate a change to the management of what is now public land, preserved as a national monument.

Syma A. Ebbin, Agricultural and Resource Economics, University of Connecticut

Setting aside underwater land has only recently gained traction as a strategy for marine protection. Marine protected areas often are controversial because they may limit fishermen’s access to waters and resources. However, most managers and scientists see limits on when and where fishing can occur as useful, if not necessary, management tools.

And now the utility of expanding closures in time and space is gaining traction as a conservation strategy. These restrictions can maintain and even enhance the abundance of many species, protect spawning aggregations and habitats and restore whole ecosystems.

In 1994 a large area of Georges Bank, a major Atlantic fishing ground that stretches from Nova Scotia to southern New England, was closed to all fishing to protect plummeting groundfish stocks. The results were phenomenal. Researchers found that the biomass of commercially important fish species and some noncommercial species increased. By 2001 haddock populations had increased fivefold, yellowtail flounder populations had increased more than 800 percent, cod biomass had increased by about 50 percent, and scallop biomass had increased 14-fold. Scientists also confirmed that the sea floor was recovering from trawl damage.

Secretary Zinke has recommended allowing commercial fishing within the Northeast Canyons and Seamounts, Pacific Remote Islands and Rose Atoll Marine National Monuments. It is likely that high-impact or high-volume commercial fishing methods, such as trawls, would negatively impact some features of these reserves.

A major study published in 2014 analyzed 87 marine protection areas in 40 countries and found that the areas with higher fish biodiversity, biomass and abundance of sharks – features that together translate to enhanced ecological health – had five essential features. They prohibited fishing, enforced these restrictions, had existed for more than 10 years, covered large areas (more than 100 square kilometers) and were surrounded by deep water or expanses of sand that isolated them.

Zinke’s memo notes that fishing in these areas should be managed under the Magnuson-Stevens Fisheries Conservation and Management Act of 1976. This law created Fishery Management Councils that are charged with developing management plans for species harvested within their jurisdictions. The act directs that “Conservation and management measures shall prevent overfishing while achieving, on a continuing basis, the optimum yield from each fishery for the United States fishing industry.”

While this is certainly desirable in theory, optimum yield is a political goal, balancing multiple objectives, that does not necessarily address the maintenance of habitats, food web dynamics or intact ecosystems. And while the act has had many successes, it has not been able to reverse declines in some fisheries. Some groundfish stocks in the northeast continue to decline, as have some stocks of salmon on the Pacific coast. Other challenges include high by-catch of nontarget species and range expansions of harmful invasive species such as lionfish.

These larger-scale changes may reinforce the benefits of establishing refuges where fishing is limited. Closing these monuments to high-impact and industrial fishing practices could help protect or restore the habitats, species and other important environmental features that the monuments were created to safeguard. 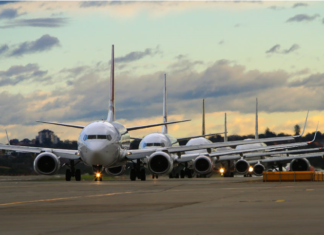 What was the protest group Students for a Democratic Society? Five...

‘Dreamings’ and place – Aboriginal monsters and their meanings