Much of the research involving the development of new drugs still uses animals. Apart from moral questions about inflicting pain and death on animals for the purpose of medical research, there are an increasing number of questions about the suitability of using laboratory animals for research into human diseases and drug testing.

There are many examples clearly showing that animal models are not predictive of human health. Recently, a group of scientists wrote an open letter in The Lancet (addressed to the UK prime minister and health secretary) pointing out that more than 90% of new drugs fail in clinical trials.

The authors of the letter say part of the reason for this is the reliance on animal testing to predict drug behaviour in people. They claim that animal tests do this with the same probability as the toss of a coin. And they suggest that animal research be replaced with promising new technologies that increase clinical predictability as well as improving efficiency and cost.

Other researchers have voiced similar concerns. An expert scientific group on phase one (screening for safety) clinical trials in the United Kingdom, for instance, concluded that pre-clinical animal studies may not reproduce the intended pharmacological effect, may give misleading results and, most significantly, may not reflect toxicity in humans.

While humans and other animals have biological and physiological similarities, differences at the molecular and cellular levels can result in different responses to drugs.

The thalidomide tragedy of the late 1950s and early 1960s is a well-known example for the inappropriateness of animal research. Thalidomide had been tested on several animal species and found to be safe, even in large doses. Yet thousands of children worldwide were born with missing or shortened limbs after their mothers took the drug for morning sickness.

The website of Humane Research Australia lists over 60 drugs, including thalidomide, that have been “successfully” tested on animals, but are toxic to humans. The site notes that the list is not exhaustive.

In contrast, penicillin may not have seen the light of day if it had been tested on guinea pigs or rats – it kills guinea pigs and produces birth defects in rats. In fact, this antibiotic stayed on the shelf for over a decade because it was not effective in the rabbits on which it had been tested.

There are many other examples showing animal testing to have very poor predictive value for human diseases and toxicity. But animals are still used in laboratories all over the world to test the safety, toxicity and effectiveness of drugs. In fact, (and rather paradoxically) animal testing was made mandatory by drug regulators after the thalidomide tragedy. During the more than four decades since, it has become clear that animal tests fail to accurately predict human responses. And now, new testing methods are available.

In their book “Sacred cows and golden geese” Ray Greek and Jean Swingle Greek write that they could not find instances of advances that could be credited to the animal model despite searches of medical literature. Most drug advances are due to clinical observations by doctors and nurses on their human patients. But many clinical discoveries, discoveries by serendipity or other non-animal based discoveries were later “validated” in animals.

Humane Research Australia provides a fact sheet with a range of alternatives to animal-based research. They include:

Genomics (the study of the chromosomes of an organism), proteomics (study of proteins, particularly their structures and functions), nanotechnology, phage display (a method of quickly evaluating a huge range of potentially useful antibodies and then producing large quantities of the selected ones) and microfluidic chips (silicon microelectronics), are all new technology alternatives to animal testing that are worth considering.

Human organs on a chip, described as “cutting tiny grooves into silicon and plastic substrates, introducing living cells into the spaces, and hoping the end result will mimic a particular biological system, like a human organ”, are reportedly close to practical application.

The aim of this research is not to make replacement organs for transplant, but to replicate an organ’s functions to make the chips useful in testing substances for toxic and therapeutic effects. Organs on a chip have so far been developed for the human lung and intestine. And this technology could help shorten the time it takes for new treatments to move to human testing and approval for general use.

Moving away from animal testing

Early this year, ABC’s 7.30 Report looked at a supercomputer in Melbourne. Professor Peter Taylor, the Director of the Victorian Life Science Computation Initiative at the University of Melbourne said, “One could imagine that if our ability to model how, say, drugs interact with their targets and how they affect an organism as a whole, then we could basically avoid any sort of animal testing. We could do it all in silica, if you like, in the computer, which would certainly be a great benefit. I don’t think there’s anybody who would quarrel with trying to do that.”

In the United States, the National Institutes of Health recently suspended all new grants for biomedical and behavioural research on chimpanzees after an expert committee concluded that most such research was unnecessary. And the US National Research Council recommends animal-based tests be replaced as soon as possible with human cell-based assays, in silico (computer) models, and an increased emphasis on epidemiology.

New medicines should be safe and effective, but animal testing is a flawed model. Given that we now have a range of other established and promising methods, we should stop using animals in research and focus on alternatives. 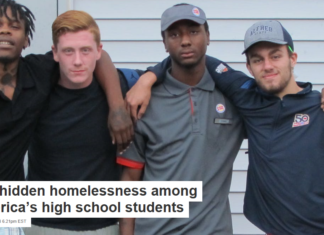 Staff Writer - January 4, 2018
Stacey Havlik, Villanova University One in 30. That’s what a new first-of-its-kind study found was the number of students ages 13 to 17 who have experienced...