Former First Lady Barbara Bush died on April 17, 2018, two days after spokespeople said that she had decided not to seek additional medical treatment. CNN had reported that Barbara Bush had COPD.

I am a respiratory disease physician and professor at the University of Pittsburgh School of Medicine, and I direct the COPD clinical and research programs. My research has been inspired by real clinical problems when facing my lung disease patients whom I have worked with over the past 30 years.

COPD is a chronic respiratory condition that results in cough and shortness of breath. It often gets worse. It affects up to 16 million people and is the third-leading cause of death in the United States behind heart disease and stroke. It further results in 6 percent of all deaths worldwide.

The disease is most commonly caused by tobacco smoking and is thus often preventable. Mrs. Bush smoked cigarettes for decades, she wrote in her biography, but quit in 1968. One-fourth of cases occur in nonsmokers, in part due to other environmental exposures. COPD is often undiagnosed because of its slow onset. Also, people often assume that their coughing is “smokers’ cough,” or old age. Women are more likely than men to be diagnosed with COPD.

COPD includes several different conditions, including emphysema and chronic bronchitis. They can occur separately or together.

Normal lungs have bronchial tubes that branch like a tree into smaller and smaller tubes, which end in tiny elastic air sacs called alveoli. These fill up as we breathe in and snap back empty when we exhale.

In COPD, the airway tubes narrow due to inflammation, increased mucous production and, eventually, scarring, which is known as chronic bronchitis. Further, the walls of the alveoli can break down, as do small bubbles coalesce to form larger bubbles. This is known as emphysema. As a result, they do not snap back as easily when a person exhales. They have less ability to transfer oxygen into, and remove carbon dioxide from, the blood.

These different processes result in a prolonged and incomplete exhalation, and air remains trapped in the lungs when the next breath begins. As the condition progresses, it becomes increasingly hard to breathe. This results in more fatigue, a decreasing ability to exercise, declining activity and a lower quality of life.

Many COPD patients develop recurrent chest colds, often requiring hospitalization and rising medical bills. Patients susceptible with COPD are also at greater risk of other chronic conditions such as heart disease, which can complicate the diagnosis and management. For example, Mrs. Bush was reported to have had congestive heart failure.

Due to differences in genetics, not all people who smoke get COPD, and not all patients have the same symptoms or progress at the same rate. It is thus critical that people who have a prolonged cough or shortness of breath undergo lung function testing, particularly if they are smokers or former smokers.

The most important treatment for COPD is to stop smoking, but vaccinations, pulmonary rehabilitation, use of long-acting inhalers and other surgical advances have led to improved quality of life, decreased hospitalizations and better survival for many patients with COPD.

Frank Sciurba, Professor of Medicine and Education, University of Pittsburgh 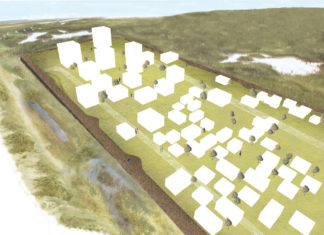