We know that Earth is getting warmer and we know that humans, through burning of fossil fuels, deforestation, and other factors, are significantly contributing to this warming.

What we are less certain about is how, and how much, the change in the global climate will affect different regions. All regions will have different responses, with varying levels of vulnerability and resilience to global climate change.

In Syria, a severe drought from 2007 to 2010 contributed to the unrest that started the country’s civil war. In a paper published in the Proceedings of the National Academy of Sciences, my colleagues and I determined that man-made climate change increased the likelihood of a drought this severe occurring.

We found that there is very little evidence to suggest that long-term trends toward higher temperatures and dryness could be explained by natural climate variability. Instead, the trends are consistent with the effects of increasing greenhouse gases, predominantly carbon dioxide, during this time. Additionally, three of the four most severe multi-year droughts occurred during the last 30 years, when the rate of emissions has seen its largest increase.

Studying the regional effects of climate change as we did here is crucial to better understanding how climate change can contribute to political and social unrest in the future.

The Fertile Crescent, located east of the Mediterranean Sea, is where agriculture and animal herding are thought to have first begun on this planet some 12,000 years ago. It is also a region that has of late been embroiled in conflict. In early 2011, Syria was the last of the Arab Spring countries to experience an uprising. This uprising occurred shortly after a very severe multi-year drought, which caused widespread crop damage and a mass migration to cities. In the past, it was not unusual for Syria to experience a wet year followed by a dry year, but multi-year droughts of three or more consecutive dry years were much less common.

In previous decades, there was a strong dependence on wheat production, which was fostered by the Syrian government for the sake of economic growth and self-reliance. The northeastern region, also referred to as Syria’s “breadbasket,” relied not only on the rain that falls during the six-month “winter” or wet season, November through April, but also on irrigation from water that flows into the country via the Tigris and Euphrates rivers and from groundwater reserves.

Prior to this multi-year drought, Syrian vulnerability to water disruption was already high. In addition to a dramatic increase in total population, from roughly five million in 1950 to roughly 20 million in 2005, there was a steady decline in groundwater, which had acted as a buffer against dry years.

When this severe drought occurred, it had a catalytic effect. The agricultural system in the northeast collapsed, many farmers uprooted their families and abandoned their villages, and a mass migration of up to 1.5 million from the rural areas to the major cities in Syria’s west took place. This occurred directly after the influx of one to 1.5 million refugees from the war in Iraq to these same cities. Together with a strong natural birthrate, this represented a population shock – a roughly 50% increase in the population of Syria’s cities in only eight years that placed an untenable burden on resources.

The rapidly growing urban peripheries of Syria, marked by illegal settlements, overcrowding, poor infrastructure, unemployment, and crime were neglected by the Assad government and became the heart of the developing unrest. Thus the drought-induced migration exacerbated a number of the factors often cited as contributing to the unrest, which include unemployment, corruption, and rampant inequality.

Previous research supports the idea that rapid demographic change breeds instability. Whether it was a primary or substantial factor is impossible to know, but drought can lead to devastating consequences when coupled with preexisting acute vulnerability. In Syria’s case, poor policies led to unsustainable land use practices and a slow and ineffective response to the drought from the current Assad regime.

To do our study, we performed analyses using both observed data and output from global climate models from the Intergovernmental Panel on Climate Change (IPCC) to quantify the increased likelihood of severe multi-year droughts under climate change. The results were consistent: severe droughts, such as the recent drought, were two to three times more likely to occur under the effects of climate change when compared to natural variability alone.

We also examined the mechanisms by which dry conditions occur in this region. Under normal conditions, winds come from the west bringing moist air into this region, a necessary ingredient for rainfall. We found that there are differences between the patterns of a typical dry year, and the pattern associated with the observed drying trend. But in both cases, the winds come more from the north, which reduces the availability of moisture. Essentially, during the recent severe drought, the drying trend served to exacerbate what was a natural multi-year drought, making it the most severe in 100 years of observations.

In our paper, we have outlined connected pathways to the Syrian conflict – from human interference with climate, to severe drought, to agricultural collapse and mass human migration. Other paths in this landscape are the region’s vulnerability to drought, which is linked to government policies promoting unsustainable agricultural practices, and the government’s failure to address the suffering of a displaced population.

An abundance of history books tell us that civil unrest can never have a simple or unique cause. The Syrian conflict, now civil war, is no exception. This recent drought was likely made worse by human-induced climate change and such persistent, deep droughts are projected to become more commonplace in a warming world. 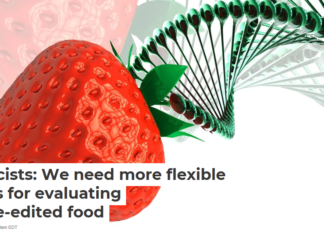 Staff Writer - May 26, 2020
Christopher J. Preston, The University of Montana and Trine Antonsen, University of Tromsø Is there now a way to genetically engineer crops to create food...