You need three ingredients to make fire: fuel (like wood or gasoline), oxygen and heat.

Fire is a chemical reaction between oxygen and the fuel. If you want to put out a fire, just get rid of one of those three things – fuel, oxygen or heat. Removing the fuel is easy when the fire is controlled. For example, when you shut off the gas valve on a propane grill, the fuel stops flowing and the fire goes out.

I teach chemistry and know from lab experiments that removing the heat or spark is harder to do. Once the fire starts, it provides heat and keeps burning. That is why throwing water on a fire puts it out. When water hits fire it boils, turns to steam and floats away, taking some heat with it. It also prevents oxygen from reaching the fuel.

Most fire extinguishers work by separating the fuel from the oxygen. The oxygen comes from the air. It is the same oxygen we breathe. Since the oxygen has to be in contact with the fuel, if you can coat the fuel with something that keeps the oxygen away, the fire will go out.

Water isn’t the only chemical that can put out fires. You want something that won’t burn, is light and easy to spread. One common choice: carbon dioxide.

Carbon dioxide is an odorless, colorless gas that is present in the air. People and animals breathe in oxygen from the air and exhale carbon dioxide.

That’s exactly what happens when wood burns. The fire uses oxygen and expels carbon dioxide. So, carbon dioxide is sort of already burned – it won’t burn if you throw it on a fire.

Since carbon dioxide is a gas, it is easy to store and distribute. If squeezed into a steel canister, the gas streams out as you open the nozzle.

Carbon dioxide is denser than oxygen. So when you spray the carbon dioxide on fire, it sinks under the oxygen, separating the fire from oxygen. No oxygen, no fire.

Carbon dioxide has several big advantages. Because the gas is squished into a canister, when it comes out it is super cold – at least minus 100 degrees Fahrenheit – removing heat from the fire.

And when sprayed on a fire, carbon dioxide just floats away. That means no cleanup. When tossed on a fire, water will flow along the floor. This means water can spread the fire if the fuel is light enough to be carried. So carbon dioxide removes two out of the three things you need to have a fire.

And, unlike water, carbon dioxide doesn’t conduct electricity, so it is good for electrical fires.

The biggest danger in using carbon dioxide is suffocation in enclosed spaces. In the same way that carbon dioxide puts out a fire by robbing it of oxygen, the gas can do the same to a human. 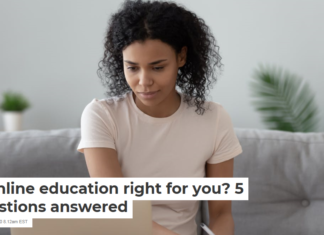 Is online education right for you? 5 questions answered

A volcanic eruption 39 million years ago buried a forest in...

Restoring touch through electrodes implanted in the human brain will require...