By Russell Warman, University of Tasmania

Tasmania’s parliament yesterday passed new forestry laws to undo the state’s forest “peace” deal. The laws are the most significant step so far in delivering the Liberal government’s pledge to “tear up” the Tasmanian Forest Agreement, formed in 2013 between the forest industry, government and environmental groups.

The law undoes around 400,000 hectares of reserves created in the agreement. These will be shifted into a new land category — Future Potential Production Forest Land. After 2020 the minister responsible will be able to convert these lands to permanent timber production zone land where native forest logging can happen.

It also allows logging for special species in conservation reserves created by governments of all hues going back over twenty years. It is intended to allow the industry to grow, presumably by allowing access to more wood in the future.

Those reserves created under the Tasmanian Forest Agreement that formed part of the new World Heritage Area extensions will remain as reserves.

From the timber industry’s perspective, the changes do not create any immediate specific shift in wood supply.

Areas that could potentially be opened for logging under the new Tasmanian forest laws.
From the Forestry (Rebuilding the Forest Industry) Bill 2014

Forestry Tasmania will continue to manage the same area of production forest with current management plans aimed at producing the same volumes of wood agreed under the Tasmanian Forest Agreement. This has led to criticism that the new laws — while technically repealing the main legislation of the forest agreement and undoing a major part of its new forest reserves — fail to deliver on the other part of the Liberal government pledge, to grow the industry.

To grow the timber industry significantly will involve growing markets. But in was the collapse of markets for Tasmanian native forest products, especially wood chips, that contributed to the decline of the Tasmanian industry in the first place. It was also a factor in precipitating the talks that led to the agreement.

In part, this loss of markets was a response to environmental groups lobbying consumers and producers, which then looked for Forest Stewardship Certification certified wood in response. Forestry Tasmania is currently seeking this certification, as was agreed in the forest agreement.

While the Tasmanian Government has been warned that repealing the forest agreement puts that certification at risk, it has placed a moratorium on opening up the reserves to logging in the next six years. This is specifically to try and keep alive the possibility of FSC certification.

New changes to the state’s forest laws do have some potentially significant effects for logging of “special species”. Special species include a number of rainforest timbers such as celery top pine and myrtle.

The new legislation allows extraction of these rainforest species from the deferred forest areas before 2020. But it goes further, and also allows it in two additional conservation reserve categories, where it has previously been excluded. These categories — Conservation Area and Regional Reserve — cover about one million hectares, or nearly one sixth of Tasmania.

Myrtle is one of the special tree species that will be harvested under the new Tasmanian forest laws.
JMC03/Flickr, CC BY-NC

While portions of these reserves do not contain forest, they also contain some important areas of forest previously protected from logging under the 1997 state and federal government Regional Forest Agreement.

As an example, the new legislation will mean logging could now occur in the 31,000 hectare Savage River Pipeline Corridor Regional Reserve located in the centre of the Tarkine region. This was created specifically to protect myrtle from logging as a centrepiece of the conservation outcomes of John Howard and former Tasmanian Premier Paul Lennon’s 2005 Tasmanian Community Forest Agreement (an amendment to the Regional Forest Agreement), signed in the wake of the 2004 federal election.

This is going to be needed to address considerable uncertainty around commercial viability, what sustainable yields might possibly be and how to protect long recognised conservation values from logging.

The special species sector will also need to give careful attention to how it will market products that are mostly aimed at discerning consumers when they could be made from wood logged from old growth rainforests taken from conservation reserves.

For all these reasons just how the legislation will impact on Tasmania’s forests, reserve systems and the special species sector are highly uncertain.

Overall, the new legislation seems to change little on the ground immediately and most likely for the next six years. Future reserves become future timber harvest areas, but are free of logging either way for this period, and the industry continues to work with the lower volumes of wood consistent with the exit from the market of Australia’s largest native forest processing, Gunns, a few years ago.

Tasmania had a negotiated forest agreement. Perhaps the biggest failing of the Tasmanian government’s current approach is that it returns forests and forestry to the site of public political contest where it has long existed. At this stage it is hard to see how this will create the stable environment the timber industry or conservation interests look for. Rather it seems to have created significant new uncertainties.

Russell Warman is a member of FSC Australia and has also worked and consulted for ENGOs involved in Tasmania’s forest negotiations. 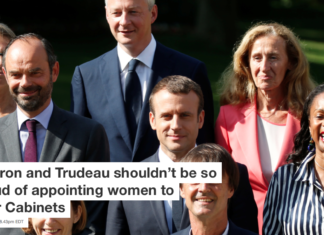 Staff Writer - July 1, 2017
Malliga Och, Idaho State University Appointing a gender-parity Cabinet seems to be the thing to do if you are a rising, progressive and male political...