The quality of rural internet access in the UK, or lack of it, has long been a bone of contention. The government says “fast, reliable broadband” is essential, but the disparity between urban and rural areas is large and growing, with slow and patchy connections common outside towns and cities.

The main reason for this is the difficulty and cost of installing the infrastructure necessary to bring broadband to all parts of the countryside – certainly to remote villages, hamlets, homes and farms, but even to areas not classified as “deep rural” too.

As part of our project Access Denied, we are interviewing people in rural areas, both very remote and less so, to hear their experiences of slow and unreliable internet connections and the effects on their personal and professional lives. What we’ve found so far is that even in areas less than 20 miles away from big cities, the internet connection slows to far below the minimum of 2Mb/s identified by the government as “adequate”. Whether this is fast enough to navigate today’s data-rich Web 2.0 environment is questionable.

Our interviewees could attain speeds between 0.1Mb/s and 1.2Mb/s, with the latter being a positive outlier among the speed tests we performed. Some interviewees also reported that the internet didn’t work in their homes at all, in some cases for 60% of the time. This wasn’t related to time of day; the dropped connection appeared to be random, and not something they could plan for.

The result is that activities that those in cities and towns would see as entirely normal are virtually impossible in the country – online banking, web searches for information, even sending email. One respondent explained that she was unable to pay her workers’ wages for a full week because the internet was too slow and kept cutting out, causing her online banking session to reset.

So poor quality internet is a major problem for some. The question is what the government and BT – which won the bid to deploy broadband to all rural UK areas – are doing about it.

The key factor affecting the speed and quality of the connection is the copper telephone lines used to connect homes to the street cabinet. While BT is steadily upgrading cabinets with high-speed fibre optic connections that connect them to the local exchange, known as fibre to the cabinet (FTTC), the copper lines slow the connection speed considerably as line quality degrades with distance from the cabinet. While some homes within a few hundred metres of the cabinet in a village centre may enjoy speedier access, for homes that are perhaps several miles away FTTC brings no improvement.

One solution is to leave out cables of any kind, and use microwave radio links, similar to those used by mobile phone networks. BT has recently installed an 80Mb/s microwave link spanning the 4km necessary to connect the village of Northlew, in Devon, to the network – significantly cheaper and easier than laying the same length of fibre optic cable.

Microwave links require line-of-sight between antennas, so it’s not a solution that will work everywhere. And in any case, while this is another step toward connecting remote villages, it doesn’t solve the problem of connecting individual homes which are still fed by copper cables and which could be miles away from the cabinet, with their internet speeds falling with every metre.

An alternative approach, championed by some community initiatives such as the Broadband For the Rural North (B4RN) project in Lancashire, is fibre-to-the-home (FTTH). This is regarded as future-proof because it provides a huge increase in speed – up to 1,000Mb/s – and because, even as minimum acceptable speeds continue to rise over the following years and decades, fibre can be easily upgraded. Copper cables simply cannot provide rural areas with the internet speeds needed today.

However FTTH is expensive – and BT will opt for the cheapest option or nothing at all. This needs to be addressed more assertively by the government as the UK’s internet speeds are falling behind other countries. According to Akamai’s latest State of the Internet report for 2014, peak and average speeds in the UK lag behind. The UK ranks 16th in Europe, behind others usually perceived as less connected and competitive such as Latvia or Romania.

Bianca Reisdorf receives funding from the University of Oxford’s Fell Fund for the Access Denied Project.

Anne-Marie Oostveen receives funding from the European Commission under its FP7 framework for the FastPass and EINS projects, and from the University of Oxford’s Fell Fund for the Access Denied project. 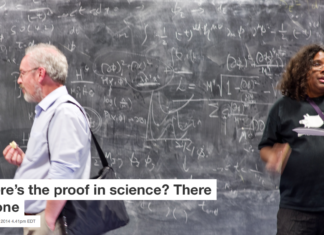 Staff Writer - October 21, 2014
By Geraint Lewis, University of Sydney UNDERSTANDING RESEARCH: What do we actually mean by research and how does it help inform our understanding of things?...

What has nuclear physics ever given us?

When will we have better batteries than lithium-ion for gadgets and...