These challenges may not always come to mind when people think about how to improve America’s public schools.

But when my colleagues and I studied the 21st Century School Buildings Program, a US$1.1 billion school building and renovation initiative in Baltimore, these were the kinds of issues that staff from community-based organizations, schools, philanthropic organizations and city agencies hoped to address through improved school facilities.

Schools are the “hubs and hearts” of neighborhoods, as one community member told us during our research in the Southeast, Southwest and Cherry Hill sections of Baltimore. If, as one community school coordinator shared, schools want to achieve their goals to educate students, they should strengthen the communities that surround them.

1. Open schools to the wider community

Making schools accessible to residents can strengthen the connection between schools and neighborhoods.

In Southeast, one school included space to host programs for newcomers to the United States. Those programs provided English language classes for students, as well as academic and social supports to help students and their families understand U.S. schools’ culture.

As a community school coordinator in Cherry Hill told us: “We can promote events and workshops and services to the entire community because they’re all happening here.”

However, although schools in our study were open in theory, they were not always easily accessible. Organizations sometimes encountered barriers, such as needing permits or having to pay fees to cover custodians or security, to host public events at schools. Our research suggests that collaboration between school districts and other city agencies can help make shared spaces more accessible by using a broader definition of community beyond just the school community, such as parents and teachers. They can also eliminate required permits and fees.

Schools in our study partnered with community-based organizations and governmental agencies to provide services to meet their community’s needs.

In Southwest, a school partnered with local organizations to offer families a food pantry and adult education, including GED preparation.

In Cherry Hill, where access to full-service grocery stores is limited, a community school coordinator reached out to a local organization to host a morning produce market at the school once per week. A representative from the city housing authority also visited the school to make it easier for families to file complaints about poor housing conditions, such as mold.

Across all three communities, officials sought input from students, families and residents about the renovation plans or designs for new schools. They also provided updates about the construction process.

Other projects included creating a walking school bus – where adult volunteers walked with children to school – in Southwest to help students travel to and from school safely.

In Southeast, parents’ advocacy to improve school facilities – such as heating and cooling systems – helped them become more involved in their neighborhoods. Families from the schools have participated in neighborhood beautification projects, community cleanups and other activities.

Strong family and community engagement, however, is not a given. Successful partnerships also require trust among schools, families and community members. In Southwest, one school’s construction resulted in another school’s closure. The students from the old school would be sent to the new school. Families from the closed school saw their school as a safe haven and fought to prevent its closure. According to one community advocate, the process of closing the school led some families to lose faith in community organizations, the school district and city agencies.

Many stakeholders that we talked to saw the new and renovated schools as a way to bring new residents, businesses and development to their communities.

In Southwest, one stakeholder told us that the new school building has led to greater interest among residents to invest in the neighborhood. “There’s a lot of residents who are organized and involved in these neighborhoods. They’re saying, ‘Hey, we got a new school. Let’s build up this neighborhood.’” Similarly, families in Southeast have become more excited about the renovated schools. A nonprofit representative said, “We see it on Facebook feeds. Because we put the [school] designs out there as much as we can, they’re starting to think, ‘Maybe I’ll put my child there.’”

Education will always be the primary function of America’s public schools. But as our research suggests, schools need not only concern themselves with what takes place in the classroom – they can also play an important part in improving the conditions in the surrounding community. 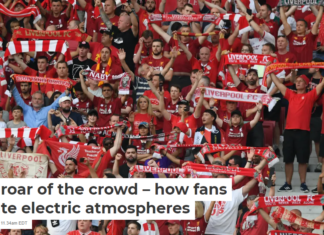 The roar of the crowd – how fans create electric atmospheres

Lost touch with someone? Reach out – your friend will likely...

With support for Bill Cosby, Phylicia Rashad becomes just one of...