A report released last year estimates that nearly half of the nation’s new teachers quit within five years, a rate of attrition that costs the United States over US$2 billion annually.

Each year, in fact, 13% of teachers either switch schools or leave teaching entirely. This rate of turnover is far higher than that of other professions, such as lawyers, physicians and college professors.

Something is rotten in the state of US education.

Observing the ongoing debates over education funding in school districts around the country, it would be natural to assume that lack of money is the major source of teacher discontent.

Perhaps we could fix the problem by providing more funds to enhance programs, purchase necessary equipment and supplies, and compensate teachers better.

In fact, however, money is not the solution, and teachers themselves tell a quite different story.

A 2012 national survey found that job satisfaction among teachers has fallen to its lowest level in 25 years. I recently spoke one-on-one with two teachers who say much the same thing – teaching simply isn’t fun anymore.

Laura has been teaching high school science for 20 years, and Murad taught middle school for several years before deciding to leave teaching to pursue a different profession.

Though from different states, both describe very similar – and disheartening – classroom experiences. If education is to improve, both believe, the underlying causes of poor teacher morale must be addressed.

No time for relationships with students

Says Laura, “I am required to spend so much time attending meetings and documenting what I do in the classroom that there is no time left to build relationships. When I first started teaching, we could really get to know students, but now taking time to do so is grounds for punishment.”

Murad recounts a story from his mother, who taught with him in the same disadvantaged urban community.

One day a colleague had paused class so that she could sew a student’s ripped pants back together. “It was the only pair of pants she had, and no one else was available to repair them,” she explained. But a visiting administrator from the state capital happened to peer into the classroom during this time, and the teacher was later docked for interrupting her teaching.

“We are closely monitored to ensure that we are teaching ‘bell to bell.’ One day one of the girls in my class was tearful and clearly distraught. I stopped class for a few minutes and took her into the hallway to find out what she was upset about. It turned out that she had just learned she was pregnant and did not know what to do. But one of the administrators saw me with her in the hall, and I later received counseling because I was not keeping the other students busy.”

To those who think teaching is nothing more than transmitting information, such policies make sense. But to those who recognize that good teachers really care about their students, these same policies seem not only ineffective but deeply counterproductive.

An educational system that sees students as nothing more than funds of knowledge or sets of skills is missing something very important – human beings in the making.

There is a second, related source of teacher demoralization, grounded in schools’ fears of bad publicity and lawsuits.

Murad recalls his first day of teacher orientation, which was devoted almost entirely to forms of conduct that teachers must scrupulously avoid. Teachers are prohibited from showing students that they are getting angry, and they are especially warned against showing any form of affection to students. He vividly remembers being told, “You must never hug a student.”

Murad can see that touching students runs the risk of appearing inappropriate. “But on the other hand,” he says, “many of my students came from poor life circumstances that frequently confront them with difficult choices. To tell me that when a child reaches out, I am simply supposed to cross my arms and step away seems deeply inhumane. We need to be careful about misconduct, but not so fearful that we can no longer show our students that we care.”

Laura says much the same:

“When you are with students many hours each day over an entire school year, it is inevitable that you will get frustrated, even angry from time to time. When that happens, we should not pretend to be robots. It is important for students to realize that teachers are human beings too, and to see how we handle such emotions. How can I be a good role model if I am forbidden to be honest with my students?”

A third source of demoralization is testing. Thanks to funding formulas mandated by No Child Left Behind and similar legislation, schools have been turned into testocracies, where test scores rule all. Says a young preschool teacher, Rebecca:

“When testing is going on, my students are required to move through the hallways in silence. As a result, they are beginning to think that school is about two things: taking tests and being quiet.”

“Not only do we take mandated tests, but we pilot many tests in development, because it provides additional income to the school system. We spend so much time testing that there is no time left for learning anything except what is on the tests. Whole subjects such as art, music and gym, which are not tested, have been cut back or eliminated. Because of this, students are getting a narrow education, one that overlooks important parts of their development.”

A fourth and final source of demoralization is lack of understanding on the part of those who make education’s rules.

“Most of the politicians who set the benchmarks have never actually taught themselves, and many of the administrators charged with implementing policies have not spent time in the classroom for years. Because of this, teachers are being required to follow policies that in many cases simply don’t make sense.”

“At one level, pay for performance makes sense, and teachers who are doing a bad job should not be promoted or get raises. But at a higher level, teachers know that we are not being compensated for true educational effectiveness. Instead we are being evaluated according to rubrics that have very little to with the quality of students’ experience in the classroom or the degree which they are learning things that really matter.”

While the challenges are many, one theme clearly emerges from my conversations with Laura and Murad.

If education is to thrive, we need to develop more trust in the character and professionalism of teachers. We cannot expect teachers to shine if we treat them at every turn like problem students. Instead we must recognize and respect the fact that, when it comes to good education in their classroom, they know at least as much as – and probably more than – anyone else. 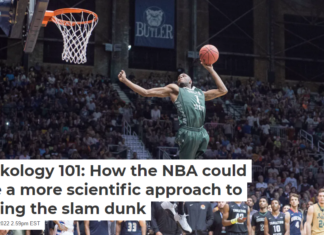 Dunkology 101: How the NBA could take a more scientific approach...

Staff Writer - February 19, 2022
Justin Barber, University of Kentucky I grew up watching some of the greatest slam dunk artists in the world.

“You’re unallocated!” and other BS companies use to obscure reality