If you’re a teetotaller, your friends have likely tried to convince you to taste red wine by swearing on its multiple health benefits. These benefits have been credited to a compound found in red wine: resveratrol. But claims for this compound have been a subject of major debate – while some argue that it can prevent cancer and promote heart health, others say there is no proof.

Resveratrol is a compound produced by certain plants in response to stress, injury, or fungal infection. Its natural function is to ensure the survival of the plant under these harsh conditions, and it has been used as an oriental medicine to treat diseases related to blood vessels and the liver. However, some studies have failed to observe the same “elixir” function. Because of the lack of enough human clinical data and a lack of understanding of how exactly resveratrol might work, the jury has remained out on whether this compound actually does lead to health benefits.

Now, Sajish Matthew and Paul Schimmel at the Scripps Research Institute have taken a key step in addressing this. In a study published in Nature, they explain the mechanism through which resveratrol does have anti-cancer, anti-diabetic and cardio-protective effects. And their findings open up avenues for its use in therapeutics.

Cells – the building blocks of our bodies – function properly because a large number of proteins inside them do specific jobs like enabling a cell to move from one place to another. These proteins interact or bind with partner proteins to carry out many functions, and how they partner up is dictated by their 3D structures – so proteins with similar structures often bind to each other and have similar functions.

Matthew and Schimmel became interested in resveratrol when they realised that the stress-response compound they were initially looking into, called tyrosyl tRNA synthetase, had a similar 3D structure to resveratrol. Excited by this similarity, they found that resveratrol interacted with the tRNA synthetase and that this interaction was critical to whether resveratrol exhibited a stress response – which would give red wine some of those health benefits. But if for some reason this particular interaction was prevented from happening, the red wine compound would lose them.

After finding the key partner for resveratrol, the authors focused on understanding how this interaction modulated the levels of a number of other molecules that govern how a cell copes with different stresses. Three of these molecules are called p53, AMPK and SIRT6.

Using a mouse study, the scientists showed that resveratrol can increase levels of p53, AMPK and SIRT6 in cells. This is important because p53 is regarded as the most potent brake on tumour formation, and increased levels can explain why red wine can reduce tumour occurrence. Similarly, increased amounts of SIRT6 can lower the glucose levels seen in diabetic patients. Grapes are another major source of resveratol and this might explain why grapes are recommended to diabetics. Increased levels of AMPK cause cells to respond to stress more effectively by promoting cell survival.

So the Nature study explains a new fundamental mechanism that mediates the multiple health benefits ascribed to the red wine compound. The hope would be, then, that the key partner for resveratrol – tyrosyl tRNA synthetase – could also be used alongside it for therapeutic purposes. But before we get too optimistic, a crucial step will be to validate these studies in human clinical trials.

And before you jump on to your next glass of red wine, it’s worth noting that resveratrol is also found in adequate amounts in eucalyptus, lily, peanuts, mulberries and, of course, grapes. So any health benefits that there are can be had from alternative sources and very much open to teetotallers out there deprived of the elegant taste of a glass of red wine. 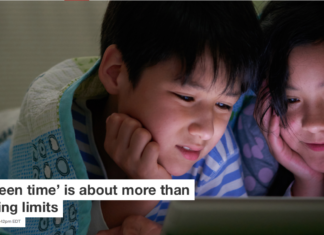 ‘Screen time’ is about more than setting limits

Staff Writer - July 8, 2017
Nathan Fisk, University of South Florida In today’s media-rich world (or media-saturated, depending on your view), one rarely has to look far to find parents...