Americans of a certain generation will remember this mantra from the 1980s: Just say no.

This simple phrase was the cornerstone of Nancy Reagan’s drug abuse awareness initiative, rolled out in response to perceptions of sharp increases in youth drug use from the late 1970s and into the early 1980s. It was also the cornerstone of D.A.R.E., the controversial youth substance abuse prevention program.

Recently, Attorney General Jeff Sessions announced that he would like to reinvigorate D.A.R.E., a move that was met with considerable skepticism in the media.

As a professor of psychology and director of the Center on Youth Violence and Juvenile Justice at Rutgers University-Newark, I welcome any and all efforts to support positive youth development and prevent youth substance abuse – but only if those efforts are in line with evidence from scientific research. Does that include D.A.R.E.?

The origins of “Just say no” are by now apocryphal, with potential attributions to a California elementary school student during a school drop-in from the first lady or a New York City advertising executive.

The command, however, is carved deeply into the foundation of over 30 years of U.S. drug prevention policy.

The idea of just saying “no” to drugs emanates from a simplified view on “rational choice theory,” which contends that people choose their behaviors in order to maximize rewards and minimize costs.

It was also the central concept of the D.A.R.E. (Drug Abuse Resistance Education) program, when it was initiated in 1983. The goal was to help youth see that the costs of drug use far outweighed any rewards, and could be avoided by refusing to use drugs. This original model of D.A.R.E. seemed to rely on just a few key points: 1) drugs are bad; 2) if kids knew how bad drugs were, they would never choose to use them; and 3) this would be especially true if police officers were the ones telling kids about drugs.

Very simply, D.A.R.E. was a program that rested on the premise of training kids how to say “no.”

Of course, anyone who has ever been a parent knows that kids already know full well how to say “no.” But D.A.R.E. developers and interventionists knew they were laboring against peer pressure and a popular culture that glorified recreational drug use.

By now, it’s fairly well-known that the first version of D.A.R.E. was a failure: Studies of the program found that not only did D.A.R.E. fail to prevent students from using drugs, in some cases it actually increased the likelihood that students would use drugs.

Part of the difficulty with any substance use prevention program is that experimentation and risk-taking are part of youth development, and providing students with more elaborate information about the effects of different substances could pique their interest even more, particularly if the information is not presented appropriately.

Regardless of how the first D.A.R.E. program fell short, its failure was acknowledged. According to D.A.R.E. publicity materials, the program is still in place in approximately 75 percent of American school districts, but D.A.R.E. has fallen from grace and is no longer as central to U.S. anti-drug policy as it once was.

D.A.R.E. developers revised the program in the late 1990s and early 2000s, attempting to bring the program in line with scientific research and theories on youth drug use prevention. Yet these changes appeared unconvincing and failed to bring D.A.R.E. back to its former prominence.

When Jeff Sessions announced that he would like to revitalize D.A.R.E., reporters and pundits alike seemed troubled: Does Sessions want to return to implementing a verifiably ineffective program? In his announcement, Sessions seemed to paint a picture of the early glory days of D.A.R.E., and those in the media who have been covering and writing about the announcement are justifiably concerned.

But given the history of D.A.R.E., it’s hard to imagine that we’ll be seeing “Just say no” redux anytime soon.

You might be surprised to learn this, but the contemporary version of D.A.R.E. isn’t really D.A.R.E. at all – it’s a D.A.R.E.-branded adaptation of a highly successful, evidence-based substance use prevention program that rests on a body of scientific research documenting its effectiveness.

The program is called “Keepin’ It REAL” and was developed originally by prevention scientists at Penn State University. On its face, KIR looks like another “just say no” program: It relies on the acronym REAL, applied as “refuse,” “explain,” “avoid” and “leave.”

But while the theme of KIR rests on refusal and avoidance (i.e., just saying no), the curriculum addresses many of the issues that contribute to drug use in the first place, by teaching and working with youth on communication skills, self-regulation, cognitive problem-solving and emotion knowledge.

This approach to substance use prevention is in line with other, similar programs such as Life Skills Training (developed by Cornell University researchers) and Toward No Drug Abuse (from scientists at the University of Southern California). These sorts of substance use prevention programs have been proven to reduce the likelihood of substance use, but also the likelihood of problem behavior and violence – with the added benefit of improving positive behavior and interpersonal skills.

The new D.A.R.E.-branded KIR program hasn’t yet been subjected to formal evaluation: The biggest question is that we don’t yet know whether KIR can be delivered effectively by police officers. But KIR has passed muster through a variety of prior adaptations, and the track record of the Penn State research team for implementing effective programs is promising.

When Sessions called for renewed, large-scale implementation of D.A.R.E., many in the media seem to have missed that he’s talking about the current configuration of the program – a new methodology that’s a more likely recipe for success than the infamously ineffective original D.A.R.E. What’s more, the D.A.R.E. folks have made it clear over the years that they will not be going back to the approach that was proven at best ineffective and at worst harmful.

In fact, the biggest obstacle to D.A.R.E.‘s efficacy may be the D.A.R.E. brand itself, which has clearly been tarnished after decades of research criticizing the program.

If they can overcome that obstacle, the D.A.R.E. delivery system is optimal for large-scale substance abuse prevention. Schools are great venues for the delivery of health promotion programming, and police officers can convey the seriousness of the topic.

Fortunately, there have been notable declines in underage tobacco and alcohol use in the last several years. However, with opioid abuse on the rise and students still engaging in relatively high rates of other illicit drug use, there is good cause for a new commitment to D.A.R.E. 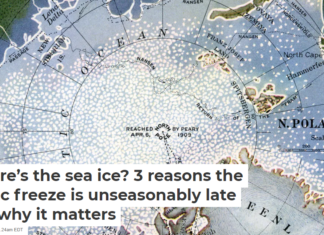 Staff Writer - October 31, 2020
Mark Serreze, University of Colorado Boulder With the setting of the sun and the onset of polar darkness, the Arctic Ocean would normally be crusted...