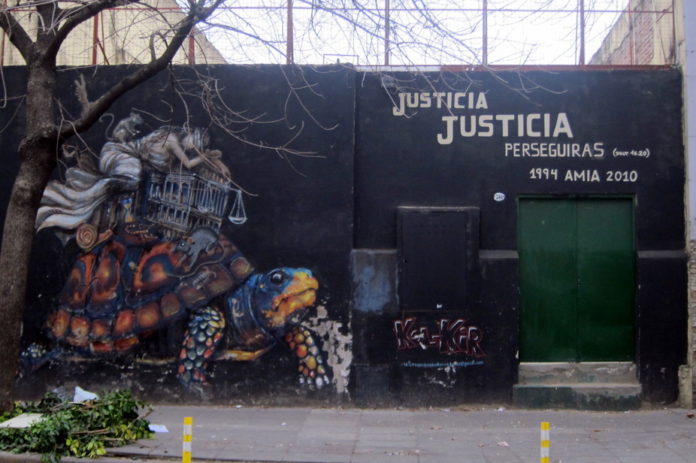 In Buenos Aires, a mural commemorates the bombing in July 1994 of the AMIA Jewish Community Centre. The black wall bears the image of a majestic tortoise. Lady Justice perches atop, her white drapery tracing the arc of his scintillating indigo and amber shell. Something is amiss, her typical, confident posture absent. She rests the torment of her swathed body against a stony-arched temple that balances precariously on the roundness of the slow beast. A rat scutters hungrily across her back, but she seems unaware. Lightly holding a pair of scales between the fingertips of her left hand, Lady Justice waits and mourns.

The mural (completed in 2010), by Jewish Argentine street art collective Kol-Kir (meaning Every Wall in Hebrew), combines Jewish and secular symbols. Found in rundown but resurgent Villa Crespo, Buenos Aires, the piece commemorates the terrorist attack of July 18 1994, when a car bomb exploded outside the Asociación Mutual Israelita Argentina (AMIA) Jewish community centre, killing 85 people and injuring 300 more. This targeting of the Jewish community was also a baleful act against the nation, because it impaired the idea of a democratic Argentina that could sustain the lives of all its citizens. Two decades later, no prosecutions have been made.

The problem of how to commemorate such catastrophes has surfaced the world over, from Bosnia to Boston. Argentines have long produced literature, film and visual art as attempts to find a local answer. The aesthetic qualities and national historical resonances of street art make it an apt contribution to this commemorative landscape.

Street art might appear to lack the appropriate attributes for mourning. It often contravenes the formal classicism conventionally associated with public memorialisation. It might also seem unjust to use for commemoration a medium as ephemeral as a wall whose painted designs rest always on the precipice of eradication, a splash or spray threatening to convert them to palimpsest.

Yet, it is this vulnerability that makes street art so apt an allegory of life’s impermanence. Catching us in the middle of our everyday affairs, encouraging us to pause for breath, it reminds us that life, too, can be stopped in medias res.

Street art also enables a singularly democratic form of commemoration. As street artist John Fekner explains, it is “not made solely for an attentive art public, but for an entire public at large”. Throwing off the alienation of the grand museum or the fenced-off monument, it induces all to look, contemplate, remember.

Informed by the past

The history of street art and graffiti in Argentina also informs the commemorative dimension of the AMIA mural. The walls of Buenos Aires and other Argentine cities have long offered themselves as sites for aesthetic experimentation, secret-spilling and social and political commentary. Officially-sanctioned murals have filled Buenos Aires underground stations since the 1930s. By the 50s, street art and graffiti had taken a distinctly political turn, the city streets awash with state and party-sponsored pieces and pro- and anti-government stencilled slogans.

Despite the highly controlled media spheres and broader cultures of censorship that Peronist rule and then, with wider-scale violence, the military authoritarianism of the 1970s and 1980s enforced, street art remained alive. It provided an independent, if illegal and risky, creative outlet and a tool for political vocalisation. The investigative journalist Rodolfo Walsh, assassinated by the military regime in 1977, called the walls “the imprint of the people”.

When Argentina formally transitioned to democracy in 1983, walls and memory became intimately entwined. After the amnesty laws (now revoked) of 1986 and 1987, activist groups began daubing the houses of known perpetrators of past human rights violations in performances called escraches. They sought to make visible in local neighbourhoods the presence of former military officers and collaborators left hidden and unpunished by the state.

Recalling the historical resonances of local street art and graffiti, the AMIA mural invests the tragedy with the moral charge of the politics and crimes commemorated on these nearby surfaces. Like them, it harnesses the agency of culture to raise awareness of perceived injustices and impunity.

More than only situating the AMIA attack in a long line of national catastrophes, the mural places it in the chain of thought that directly links the AMIA attack to the proven anti-Semitism of authoritarian rule. After the 1994 attack, the re-democratised state sought to cast the blame for the tragedy wholly in the hands of foreign others.

But, a pocket of the intellectual left suggested publicly, and with reason, that filtrates of fascist-inspired authoritarian anti-Semitism remained worryingly present in Argentina in the 1990s, wherever the architects of the attack were from. Argentine citizens, they urged, needed to engage in some collective self-reflection.

Now, 20 years later, the mural also demands contemplation. This waiting wall, like others in the city, makes active memory the duty of every democratic citizen. No lofty museum designated for the nation is needed for its heady convergence of ethics, history and aesthetics: a dusty side street suffices.

Tanya Filer does not work for, consult to, own shares in or receive funding from any company or organisation that would benefit from this article, and has no relevant affiliations. 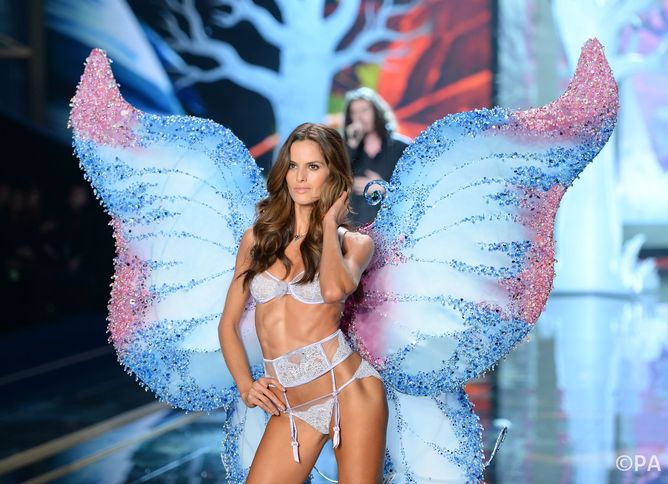 Is college worth it? Is this even the right question?

Go ahead, enjoy your memes – they really do help ease pandemic stress