Casino gaming is on the rise across much of the developed world, with governments increasingly unable to resist the allure of windfall taxes and a hefty influx of cash for the local economy. Massachusetts embraced the trend in 2011 when the state legislature voted to legalise casinos. Construction is underway for the state’s first casino at Plainridge Park, with 1,250 slot machines, harness racing and an estimated 500 new jobs.

That decision is now up for review, with a repeal referendum to be considered in the November midterms. In deciding whether to support the repeal, Massachusetts voters will need unbiased information about the social impact of gambling and its downsides. Sadly it’s going to be much harder to come by than you might think.

Anyone looking for good quality evidence about the consequences of gambling first needs to understand how knowledge about gambling is produced. How do we know what we know? Who dictates the research agenda? How is research funded? How do we ensure that we have a sound base of impartial knowledge on which to build policy?

The answers to these questions are profoundly depressing. While in the fields of tobacco and alcohol research, academics regularly debate conflicts of interest and interrogate the strategic use of research and evidence, many gambling researchers remain dependent on industry funding. Gambling is an area largely devoid of disclosure policies, and many researchers are unreflective or outright defiant about industry influence.

Researchers, regulators and policy makers champion a “partnership model” for producing research, not so much “business as usual” as “we are all in this together.” This remarkable state of affairs contrasts markedly with other fields and produces a weak knowledge base that is unevenly influenced by industry interests.

The impact on the discipline is striking. A large proportion of spending goes on prevalence studies – counting problem gamblers in the general population. These surveys are popular with industry because they make it possible to downplay the absolute numbers of pathological gamblers, along with the percentage of the general population at risk from gambling problems, the percentage of gamblers who experience problems and the proportion of profits that come from problem gamblers (estimated at between 30 and 50%).

Prevalence studies also tend to sidestep the question of social class, thus disguising the inconvenient fact that most of the harm from gambling occurs in disadvantaged populations – those with the least capacity to absorb it.

The problem with problem gamblers

Complementing prevalence studies is a vast body of research on problem gamblers. Much of it rests on the assumption that gambling is a harmless leisure activity which makes a net contribution to public funds through either taxation or out of town tourism.

The idea that normal consumers gamble without ill-effect creates a separate category of defective consumers labelled as “problem gamblers”. According to this framework, solutions to problems with gambling are to be sought on an individual level. The alternative approach – to see gambling as an aspect of public health that may be managed by limiting the supply of particular products – is poorly supported by industry or government funding, particularly where taxes on the profits of gambling have become an important source of state income, as in Australia, Canada and, increasingly, the United States.

The role of researchers

So far, these arguments have fallen on deaf ears. Senior researchers are not only content to take industry money, they are also prepared to defend these arrangements.

In December 2000 Nottingham University decided to accept a donation from British American Tobacco of £3.8 million to establish an International Centre for Corporate Responsibility. The executive editors of leading respiratory medicine journal Thorax, John Briton and Alan Knox, wrote an open letter arguing that “accepting money from the tobacco industry degrades the reputation of our University and undermines the work of all with a commitment to the teaching of medicine and the promotion of public health.”

Professor Richard Smith, editor of the British Medical Journal, resigned from his post at Nottingham, followed by a team of 20 cancer researchers, led by Professor David Thurston.

Almost 14 years later, Professor Alex Blaszczynski, editor-in-chief of the journal International Gambling Studies, and one of the most prominent gambling scholars in the world, received $1.2 million from the New South Wales clubs industry to study problem gambling in Australia. Australians have the highest gambling losses per resident adult of any country in the world and spend more on gambling than they do on alcohol or petrol.

Because of the nature of gambling, you do have to start looking at gaining access to data held by the industry, by patrons who are in industry venues and start looking at real life research that provides sensible, evidence-based information.

Blaszczynski’s defence is disappointing. It does not engage with the most pressing criticism: scholars in the fields of alcohol and tobacco have shown that industry funding systematically influences findings.

Further, by accepting that industry can control such access, Blaszczynski is, in effect, arguing for a monopoly on knowledge production for those who get along with the industry.

How industry funding frames the agenda

Blaszczynski’s acceptance of industry funding is not, however, exceptional and many in the field of gambling studies in the US, where funding for research is one-twentieth that of Australia and Canada, would vigorously defend his actions.

US universities enter into partnerships with individual casino companies. US academics compete for funding from the National Centre for Responsible Gaming (NCRG) which is paid for by the American Gaming Association and claims to have mandated, “stringent firewalls to separate the gaming industry’s contributions from the research it funds”. The effectiveness of these firewalls, and similar mechanisms in the UK and Australia, is debatable.

Not surprisingly, the National Centre for Responsible Gaming focuses exclusively on the disease model of gambling addiction and does not fund research with a wider social purview. Senior research director Christine Reilly recently justified this approach by saying:

To me it seems kind of silly to spend time and money on an issue that is extremely difficult to research, because you can’t count on people’s memory.”

John Warren Kindt, Professor of Business and Administration at the University of Illinois recently described NCRG output as “research designed not to hurt the gambling industry and to misdirect the debate”.

Some research with a broader public health remit can be found in Australia and the US, but, as I discovered when I interviewed researchers for my study of gambling research, it is likely to be criticised and ignored. The price of independence is the loss of funding and access to data.

We depend on researchers and public health organisations to inform us about the potential harms associated with gambling, consuming alcohol or smoking. The purpose of this research is to better understand how risky activities affect communities and help us to judge what restrictions, if any, should be placed on their supply and promotion.

We cannot trust gambling research. We must therefore be sceptics. Every expert invited to give evidence to a committee on gambling should be asked, “Have you ever accepted money from the industry to conduct a piece of research, write a paper or attend a conference?”

In the absence of a culture of disclosing interests, every paper submitted as evidence should be contextualised – again we must ask “Who paid for this research?” and “How did this person gain access to data?”

It’s not much – it doesn’t produce the independent research that we so urgently need – but until the field of gambling research undergoes meaningful reform it’s the least we need to do.

In the meantime, voters such as those in Massachusetts looking for independent research, will have little choice but to roll the dice.

Rebecca Cassidy is funded by the European Research Council, grant number 263433. Between 2006 and 2009 she received £90,697.22 from ‘Research into Problem Gambling’, a collaborative research initiative between the Economic and Social Research Council (ESRC) (lead organisation) and the Responsibility in Gambling Trust (RiGT), now the Responsible Gambling Trust (RGT). All aspects of the grant were administered by the ESRC. Near the end of the project, I was asked by the RiGT to submit publications for prior approval, a request that I declined. Between 2007 and 2009 I received ad hoc support from the National Lottery Commission for the Gambling Research Network, a group of early career and PhD researchers coming together in London two or three times a year. Money covered refreshments and no explicit restrictions or inducements were placed on the group by the NLC. I have not received any other direct or indirect payments from the industry or any other groups substantially funded by gambling to conduct research or to speak at conferences or events. I have paid to attend industry-sponsored events and attended free, industry-supported events in order to conduct anthropological fieldwork. No funding was received from any source in relation to the contents of this article.

Charles Livingstone is a Chief Investigator on a current Australian Research Council Grant investigating the mechanisms of industry influence of government by the Alcohol, Tobacco and Gambling industries. He has previously received grants from the Victorian Gambling Research Panel and the South Australian Independent Gambling Authority, and an international partner grant from the Ontario Problem Gambling Research Council, organisations which distribute funds derived from the proceeds of gambling. He has also received funding from local government and non-government organisations in relation to (i) the provision of expert evidence in relation to gambling applications and (ii) for specific research projects focused on aspects of gambling policy, the costs of problem gambling, distribution of gambling derived-harm, and the extent to which gambling funds provide community benefits. He was a member of the Australian Government’s Ministerial Expert Advisory Group on Gambling (2010-11). He is an editorial board member of the journal Independent Gambling Studies. He is a member of the Public Health Association of Australia and the National Association of Gambling Studies (Australia), and of the Australian Greens. He has not received research or other funding or support from and has not entered into any collaborative agreements with any gambling, alcohol or tobacco industry body. No funding was received from any source in relation to the preparation of this article. 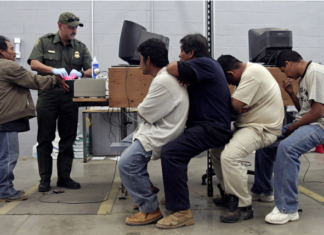 Staff Writer - April 17, 2017
Lindsay M. Harris, University of the District of Columbia In the U.S. today, a single immigration case takes an average of 677 days...

Which cheek and how many? In France and beyond, a kiss...