The human and economic losses resulting from extreme weather events during the last several years vividly demonstrate the US’ historically shortsighted approach to development. The ill-advised, fast-paced construction of human settlements in low-lying, coastal and riverine environments prone to flooding has long been the American way. From Galveston to Hoboken, we have laid out our grids and thrown up our houses with little regard for the consequences.

And the consequences can be devastating. Hurricane Sandy, which hit the East Coast in 2012 just one year after Hurricane Irene, another “100-year” storm, “filled up Hoboken like a bathtub.” The storm’s impact all across the eastern seaboard was staggering: 147 people were killed, 650,000 homes were damaged or destroyed, and 8.5 million residences lost power, some for weeks. In the end, the costs of the storm were pegged at over US$60 billion, making Sandy the second costliest natural disaster in US history after Hurricane Katrina in 2005.

Storms like Sandy are a harbinger of extreme weather events to come as a result of climate change. Without concerted action, the costs, in lives and property, of future weather events will only multiply. It’s time we recognize not only that the climate is changing but that the development patterns that have hardly served us well in the past certainly won’t serve us well in the future. Changing course will require a reassessment of risks as they relate not only to how but also to where we build. In our larger, more densely populated regions and cities, massive storm protection projects are both necessary and economically viable, but in many places we would be much better served to move out of harm’s way.

It’s beyond dispute that the planet is warming. The year 2014 was the warmest on record, and projections suggest that by 2100, average global temperatures could increase by between 2 and 11 Fahrenheit. And with rising temperatures come rising sea levels. Globally, sea level rose 7 inches during the 20th century, and projections for the 21st century are alarming, with estimates ranging from between 1 and 4 feet globally.

The rise in global temperature and sea level has been accompanied by an increase in flood events and hurricane strength and activity in the Atlantic. Since 1958, intense rainfall events have increased 71% in the Northeast. This May, rainstorms in Texas dumped 35 trillion gallons of water, enough to cover the entire state to a depth of eight inches. Here again, projections don’t bode well for the future.

Along the Atlantic coast, stronger, wetter and more frequent storms will result in ever-increasing levels of damage – especially when combined with bigger storm surges due to rising sea levels, less protection due to the loss of storm-buffering wetlands and more exposure due to increasing development in low-lying areas.

The US Congressional Budget Office predicts that the costs of hurricane damage in 2075 will double due to climate change alone and could increase fivefold with additional coastal development. And without significant changes in our land use policies, we will see additional development. Over the past 40 years, there’s been a 60% increase nationally in the number of people living in coastal floodplains. And those floodplains are growing; with each new upstream development, another downstream site is compromised. Over the last 20 years, increased runoff from new development in Houston, also known as the Bayou City, has added 55 square miles to the 100-year floodplain.

It should be clear by now that the rewards reaped from our current development patterns don’t outweigh the risks we face. In the past, we built our cities and settlements, not always wisely or well, with the assumption that the future would be similar to the past.

The evidence is now overwhelming that the future will be nothing like the past. But we continue, in many places, to act as if it will. Believing, perhaps, that if you ignore the science, the projections won’t come to pass, officials in North Carolina, Pennsylvania and Florida required that the term “climate change” be removed from official communications and state websites. Claiming “‘climate change’ is a political agenda which attempts to control every aspect of our lives,” Republican leaders in Texas “reject the use of this natural process to promote more government regulation of the private economy.”

The problem with this logic, however, is that government action often tends to stimulate rather than impede private economic actions that both drive and increase our vulnerability to the impacts of climate change. In the United States, $18.5 billion in federal fossil fuel subsidies not only hamper efforts to reduce greenhouse gas emissions but contribute directly to the expansion of the type of low-density sprawling development that increases the risks we face from extreme weather events, through increased runoff and the destruction of wetlands and open space.

The government further subsidizes risky development through the National Flood Insurance Program (NFIP), which is currently $23 billion in debt due to claims from Hurricanes Katrina and Sandy. By keeping the cost of insurance below real actuarial rates – 20% of its 5 million policies are explicitly subsidized – and by continuing to offer insurance on repetitive loss properties – one single-family home in New Jersey has filed 16 claims for a total of $1.3 million — the NFIP shields property owners from the real risks to which they are exposed. In redistributing the costs of individual choices onto all taxpayers, the NFIP actively encourages development in vulnerable, high-risk areas. Recent attempts to reform the NFIP were thwarted by a coalition of coastal residents and the National Association of Homebuilders.

We continue, in many cases, to let individual short-term interests trump collective long-term security, ignoring what climate science has proven with 95% certainty – odds that any gambler would pray for.

There are some positive signs of changing attitudes and approaches. With six innovative proposals funded in New York and New Jersey, the US Department of Housing and Urban Development’s Rebuild by Design competition signals a willingness, at all levels of government, to invest in progressive, evidence-based resilient design efforts. Recognizing the densely populated region’s massive exposure to the threats posed by extreme weather, HUD is investing over $900 million in infrastructure-scale projects. They include the creation of a multipurpose berm and storm-buffering nature preserve in the Meadowlands of New Jersey and a multi-pronged protection plan including new bulkheads, stormwater pumps and green infrastructure in Hoboken.

Such projects are a wise investment. The Army Corps of Engineers estimates that for every dollar spent on preparing for the anticipated effects of climate change – adapting, in other words – four to five are saved in post-disaster recovery and reconstruction costs. Unfortunately business goes on as usual in many places, where bearing the expense of disaster recovery trumps investing in preparedness.

Smarter choices in where and how we build

Rather than continuing to encourage shortsighted development practices, we should prioritize the development of denser, compact communities. Such communities offer economic, environmental and social benefits that make them inherently more resilient than sprawling low-density developments. With their smaller footprint, such communities have lower infrastructure costs per capita and provide for the preservation, or restoration, of natural habitats and storm-buffering wetlands. They also reduce energy consumption and thus greenhouse gas emissions at both the household and neighborhood level. When properly designed, such developments balance the individual needs of each household with the collective needs of the larger neighborhood, encouraging a sense of mutual respect and responsibility that is critical to the resilience of the community.

We have the means to encourage adaption of this type. The voluntary buyout of flood-prone properties is particularly effective, from both a cost and resiliency perspective. Instead of continuing to subsidize flood insurance for properties in areas at risk of flooding — an estimated one-third of all claims paid through the NFIP are for repetitive loss properties — public funds should be used to acquire and restore the land to its natural state. A study done following a buyout of properties in Kentucky showed a return of $2.45 for every dollar invested in buyouts.

In addition to withdrawing from flood-prone areas, the creation of resilient, compact communities requires identifying and guiding development toward more opportune locations. In addition to having no adverse impact on existing floodplains, such locations should accommodate greater density while providing access to jobs, education and recreation through a variety of transportation choices. Unfortunately, current zoning often discourages compact development.

It’s time to wise up

Each year brings more evidence of the human and economic impacts of climate change. It’s time that we stop throwing good money after bad. Rather than spending $25 million on PR campaigns to convince ourselves we’re “stronger than the storm,” we should start making choices that prove we’re smarter. For while we can’t say when the next hurricane with the force of Sandy (or even greater force) will batter the Atlantic Coast or when extreme flooding will hit Texas, we do know that there will be a next time. And we’re still fundamentally unprepared for it. We can’t continue to bet against climate change; we’ll lose in the end.

Keith Krumwiede is Associate Professor of Architecture at New Jersey Institute of Technology. 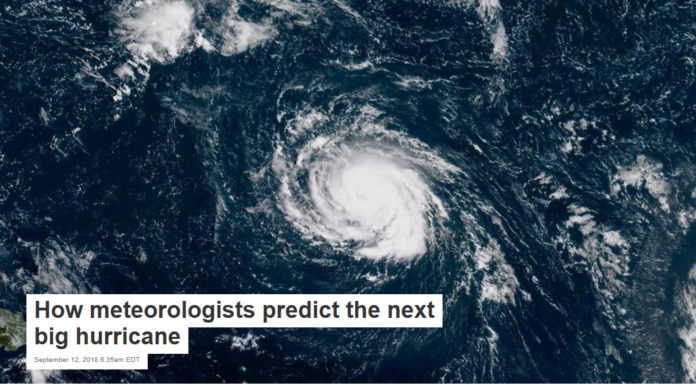 Drake and Jake, Mountain Dew’s millions and the Marvel Universe – which ads won the Super Bowl, and which fell flat

Next time, we’ve got to handle emergency donations better