When President Donald Trump on Dec. 5 recognized Jerusalem as the capital of Israel, he not only effectively endorsed Israel’s de facto annexation of East Jerusalem, which Palestinians have also long claimed as their own – he also radically altered the direction of American foreign policy in the Middle East.

Since 1993, successive American administrations have insisted that direct, U.S.-brokered peace talks between Israel and Palestine could end the Arab-Israeli conflict. Their aim: a “two-state solution,” in which a viable Palestinian state on the West Bank, Gaza Strip and East Jerusalem exists harmoniously alongside Israel.

This was always a bit far-fetched. Now, because Trump has taken Jerusalem – one of the central tenets of the two-state solution – off the table, it’s basically impossible.

Yet while the decision has been globally condemned and protested in Palestine, it may just allow for more just and creative visions for peace to take hold in the future. As an American scholar of Palestinian descent who has written a book on Palestinian history and the Israel-Palestine conflict, I take the longer view here.

To be sure, Israel will likely use Trump’s announcement to consolidate its hold on East Jerusalem, leading to further marginalization and discrimination against Palestinians there. And violence may well increase in the short term. But as the U.S. and the international community realize that the era of the two-state plan is over, other solutions may start to take shape.

Jerusalem and the two-state solution

To understand why Jerusalem is so divisive, it’s important to understand the city’s meaning in the Israel-Palestine conflict.

In the Six Day War of June 1967, Israel captured much of historic Palestine, including the West Bank and the Gaza Strip. It also occupied the eastern half of Jerusalem, whose old city houses holy sites like the Western Wall, the Church of the Holy Sepulcher and the Aqsa Mosque. These places are sacred to Jews, Christians and Muslims alike.

Shortly thereafter, the U.N. Security Council passed Resolution 242, calling on Israel to withdraw from “from territories occupied in the recent conflict.”

The international consensus is that this decision applies to virtually all of these occupied Palestinian territories, including East Jerusalem. Israel, however, contends the U.N. resolution requires only a partial withdrawal – and only in the context of a comprehensive peace agreement with the Palestinians.

In the 50 years since the Six Day War, Israel has been consolidating its hold on the West Bank and East Jerusalem, building Jewish settlements on the land it seized. In 1980, the Israeli Knesset unilaterally declared all of Jerusalem – including East Jerusalem and several nearby Palestinian towns – as the capital of Israel.

To try to make this declaration a reality, Israel has moved an estimated 208,000 Jewish settlers into East Jerusalem over the past 50 years, in violation of international law. It has also been quietly removing Palestinian residents from East Jerusalem. Since 1967, the residency permits of nearly 15,000 Palestinians living in the city have been revoked.

Palestinians in Jerusalem also complain that they are cut off from friends and family in the West Bank by a wall that snakes deep into the occupied territories, isolating Jerusalem in the process.

Israelis, for their part, insist that the separation wall exists for security reasons. They point to a string of suicide bombings carried out by Hamas and other Palestinian militant groups inside Israel from 1994 to 2005. These bombings dropped dramatically once the wall was built.

Many in Israel’s current right-wing government also reject the notion that what they’re doing is even occupation. Recently, when the BBC asked Israeli Deputy Foreign Minister Tzipi Hotovely about Israel’s violations of Palestinian human rights, she replied, “I deny the idea of occupation. This is Judea and Samaria.” In calling the West Bank by its biblical name, Hotovely was rhetorically erasing any Palestinian claims to that land.

But the status of East Jerusalem under international law hasn’t changed: For the U.N. and its member countries, the city is still illegally occupied. That’s why not a single country has recognized Israel’s claim or moved its embassy from Tel Aviv to Jerusalem – until Trump announced the U.S.‘s intention to do so this week.

Ample research suggests that the power differential between a militarily strong Israeli state and the stateless Palestinian people gave Israel very little incentive to recognize Palestinian claims to begin with.

The rightward political and social shift in Israel likewise diminishes the chances that an Israeli government would be willing or able to acknowledge any Palestinian rights to the contested lands.

Given this imbalance, many Palestinians have long seen a two-state solution as a nonstarter.

Still, American analysts and politicians – including, most recently, former Secretary of State John Kerry – have clung to the idea. To broker this elusive deal, successive American mediators have pressured Palestinians to give up ever more territory.

Aaron David Miller, an American negotiator who worked with multiple U.S. administrations on the Arab-Israeli conflict, has even described America as “Israel’s lawyer” in peace talks.

For me, then, Trump’s recognition of Jerusalem as Israel’s capital is simply the acknowledgment of this reality. The president has now stated publicly what previous U.S. administrations – both Democrat and Republican – have been reluctant to admit: that the U.S. is unwilling to pressure an ally like Israel hard enough to achieve peace.

Rather than insist, as his predecessors have done, that a two-state peace deal is just around the corner, Trump has essentially pronounced its death. That is a relief for Israel and a blow to Palestinians – if not a terribly surprising one.

Now that the two-state solution is over, perhaps the region can start looking at alternative visions for a genuine peace that actually represents the rights and claims of all people living on this land. 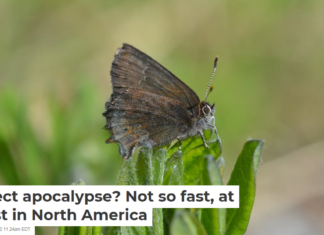 Staff Writer - August 10, 2020
Matthew D. Moran, Hendrix College In recent years, the notion of an insect apocalypse has become a hot topic in the conservation science community and...