I’m not a fan of karma. I’m still waiting for it to come back to the child in my class who pushed me over in the playground and chipped my tooth. That was in 1983 so I’ve been waiting quite a while. By that reckoning, I’m not sure I want to wait 31 years for a pay rise.

Microsoft’s new CEO Satya Nadella, speaking at the Grace Hopper Celebration of Women in Computing event last week, was asked what advice he would give to women who aren’t comfortable asking for a raise. He said:

It’s not really about asking for the raise, but knowing and having faith that the system will actually give you the right raises as you go along. Because that’s good karma. It’ll come back because somebody’s going to know that’s the kind of person that I want to trust.

For those unfamiliar with the US Navy Rear Admiral Grace Murray Hopper, she was an early computing pioneer. Hopper pushed forward the field of programming, created the first compiler, and was key in the development of the modern computer, earning her the nickname “Queen of Software” and “Amazing Grace”. She has a warship and a Cray supercomputer named after her.

The conference bearing her name is organised by and for female computer scientists, bringing women together from across the world to explore, address and compare the challenges of being a woman in technology. For the 2,000+ women attending, being told by an industry leader to sit back and trust the system is, at best, insulting and, at worst, dangerous.

Following a subsequent storm of criticism, Nadella went on to clarify that he was wrong to say women should rely on “karma” to reward them appropriately. However, at that stage he didn’t contradict his statement; rather, he claimed he didn’t articulate it correctly. How he meant to explain it, he said, is that women should trust that the system will recognise their contribution (with the added implication that if they keep their mouth shut and behave, their bosses will look more favourably upon them).

Forgive me if I remain sceptical and unimpressed.

We know there is a gender pay gap. We know that women are significantly unrepresented in technology industries. Why then should it be a surprise if women don’t trust a system where the odds are already stacked against them?

Nadella later followed up (the less charitable might say “backtracked”) with the line “if you think you deserve a raise, you should just ask”. It’s a nice, simple idea – but research has previously shown that women are much more reluctant to ask for promotion or a raise, and if they do, they are much more likely to be treated harshly than a man making the same request.

Nadella’s comments come two weeks after the Royal Society announced it would be looking into the reasons why, of the 43 individuals who won their University Research Fellowships in 2014, only two were women. Again, women being reluctant to put themselves forward could well be a factor in this: women accounted for 19% of applications for the URF scheme but only accounted for 13% of those shortlisted, 9% of those interviewed and less than 5% of those awarded.

I’d rather not leave it up to karma, so I’m asking this: Satya Nadella, could we please have more women in Microsoft? Perhaps more than the current 17.1% female technical and engineering staff? And maybe more than two women on your board of directors? And maybe paid equally, rather than just 78% of the salary of their male colleagues? And then maybe other companies will take note and follow suit, and you can bask in the warmth of the good karma that you’ve engendered.

Kate Devlin does not work for, consult to, own shares in or receive funding from any company or organisation that would benefit from this article, and has no relevant affiliations. 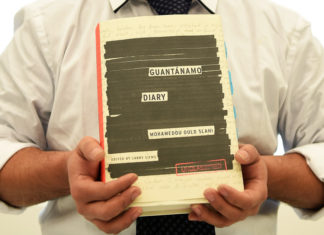 Staff Writer - March 9, 2015
By Peter Finn, Kingston University There are many incredible things about the diary recently published by Guantanamo Bay detainee Mohamedou Ould Slahi. It contains over...