Since the launch of #MeToo, there’s been a lot of attention on problems of sexual harassment and assault in the U.S.

Unfortunately, this has not amounted to much progress in terms of reductions in sexual harassment and assault or improvements in conviction rates. This is in part due to the social and political dissension regarding the veracity of accusations and what constitutes fairness of due process when cases arise.

Our new study, published April 30 by nonprofit Stop Street Harassment, in partnership with our team at UC San Diego’s Center on Gender Equity and Health, as well as others, looks closely at the scope of these issues in our country.

The headline figure is that, as has long been known, sexual harassment affects most women and many men.

However, our study dug deeper, providing insight into three questions that are central to today’s media coverage of #MeToo.

1. Have the rates of sexual harassment and assault changed with the #MeToo movement?

In the nationally representative sample of the approximately 2,000 Americans whom we surveyed in early 2019, 81% of women and 43% of men said that they had experienced sexual harassment or assault at least once in their lives.

Eighteen percent of women and 16% of men reported recent sexual harassment or assault in the last six months, which is not a significant change from 2018.

The overall prevalence of sexual harassment or assault throughout one’s lifetime also showed no change.

These findings suggest that improved awareness of #MeToo and potential backlash against it have not altered the incidence or reported prevalence of these abuses.

However, while these data indicate no change in survey reports, U.S. crime data indicate that more people are reporting sexual harassment and assault to the police, possibly due to greater comfort engaging the criminal justice system thanks to #MeToo.

Nonetheless, high rates of sexual harassment and assault, particularly for women, continue to be a norm in the U.S.

2. How safe from sexual harassment are students and workers?

Our study suggests that most sexual harassment occurs on the street or in other public venue.

However, 38% of women and about 15% of men have experienced sexual harassment in the workplace and at school.

Harassment in high school was particularly common, reported by 27% of women and 11% of men. Smaller but significant groups said they had experienced harassment at their middle school and college campuses.

This suggests that, despite concerns about sexual harassment in U.S. schools and workplaces, long-standing federal policies from the Department of Education and the Equal Employment Opportunity Commission against these abuses are not effectively preventing perpetrators from acting anyway, typically with impunity.

3. How safe are boys and men from false allegations of sexual harassment and assault?

False allegations of sexual harassment and assault against high-profile individuals are a growing public concern. Some have expressed worry that there is great risk for unfair and unfounded accusations against men and boys.

These fears were raised by some, for example, in national discussions of the allegations against President Donald Trump and Supreme Court Justice Brett Kavanaugh.

While our data reveal that most people believe survivors to varying degrees, one in 20 women and one in 12 men felt that most or all of the allegations in recent high-profile cases were “false and that accusers are purposefully lying for attention or money.”

While one-third of respondents reported ever perpetrating sexual harassment or assault, only 2% of men and 1% of women said they had ever been accused of these abuses. That shows that, while ongoing public perceptions of false accusations as a major risk persist, any accusation, including false accusations, is in fact very rare.

What does this all mean?

Sexual harassment and assault is a persistent issue in the U.S. Our study underscores that it’s particularly common for American children, disproportionately girls. Furthermore, many are also enduring this harassment in the workplace.

When these abuses occur, most bear them in silence, without accusations against those at fault. How do I know this? Well, this is the part where I cannot tell you based on our research, but because I did not tell anyone when I was sexually harassed in school and early in my career: #MeToo.

We say nothing because it is not worth the burden – of tackling institutional accountability when there is little likelihood of repercussions for those who victimize us; of trying to justify or prove ourselves in environments where people continue to believe that false accusations and confused memories are common; of taking the time to process what happened rather than just focusing on moving forward, and avoiding those trying to harm or impede us.

I believe that the U.S. does too little to educate the public regarding the nature and scale of problem, or the fact that men are far more likely to be victims of these abuses rather than of false allegations related to their perpetration.

My team’s hope with this work is to give light to the risk and harms of sexual harassment and assault as a social epidemic in our country. Given how rare it is for those affected to seek help, the U.S. needs to prioritize its prevention for the benefit of all, regardless of gender.

Anita Raj, Professor of Society and Health, Medicine, and Education Studies, and Founding Director of the Center on Gender Equity and Health, University of California San Diego 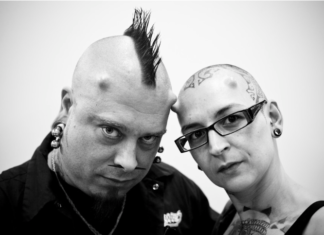 Staff Writer - March 28, 2017
Jessa Lingel, University of Pennsylvania Before the internet, people interested in body modification – not just tattoo and piercing enthusiasts, but those drawn...