Too many people are losing their lives in fires.

Although the number of people killed in fires in the United States has been going down since the 1980s, the number is still high. In the year 2020, for example, 3,500 people were killed in fires in the U.S. The vast majority of those deaths – 2,580, to be exact, or about three out of every four – took place at home. Another 11,500 people suffered fire-related injuries at home.

I know all of this too well. Before I became director of the West Virginia University Fire Service Extension, I spent 23 years as a fire and explosion investigator for the West Virginia State Fire Marshal’s Office. In that position, I investigated approximately 1,000 cases in which people were killed or injured in home fires. As any fire investigator will tell you, I know that a lot of fire deaths and injuries can be avoided by following a few simple steps.

1. Get some smoke detectors

Smoke detectors reduce your chances of dying in a fire by 50%.

They can be purchased at department stores, hardware stores or online for as little as US$10. The more expensive models, which may cost closer to $100, have extra features, such as flashing lights or audio files where a parent can add a voice message telling their child to “Wake up, the fire alarm is going off!” Some can also detect carbon monoxide.

If you or your family cannot afford a smoke detector, you might be able to get one from your local fire department or your local American Red Cross for free. Most departments will also teach you how to install one.

2. Put a smoke detector on every level of your home

You should have at least one smoke detector on every level of your home. Ideally, there should be one in every bedroom, another one just outside of every bedroom, one in the laundry and furnace area and one in the attic.

Change the batteries twice a year. Do this even if you don’t hear the detector “chirp” to let you know the batteries are low. Replace the smoke detectors every 10 years.

In several cases, I have investigated fatal fires only to find the detector on the kitchen counter with no batteries in it.

Research indicates that you are more likely to survive a fire if your bedroom door is closed.

That’s the reason why firefighters say you should install a detector outside of every bedroom, not just inside. If a fire breaks out outside your bedroom, you want to be awakened by a smoke detector, not actual smoke. Keeping your door closed gives you extra time in a smoke-free environment to escape a house fire.

All members of the house should decide on an exit plan for each of their bedrooms. If you can get up and get out the normal way, through a front or back door, then take that route. Remember: If the door handle is hot, do not open the door. If flames or smoke block your path, you need to exit through your window.

Everyone should practice the plan and be familiar with it. Write the plan down and practice it when you change smoke detector batteries.

Your family should have a meeting spot outside – such as across the street, a tree or mailbox – where everyone should go once they escape.

If you live on the second floor of a building or higher, you may need to purchase a fire ladder to safely escape through your window. These ladders can be rope or chain ladders with steps made of plastic or metal. You can purchase these at most home repair stores and online. They are already put together and ready to use.

Look for an Underwriters Laboratories (which is a global safety certification company) listed brand to purchase. Read the instructions that come with the ladder and be familiar with how to use it.

The time to call 911 is after you have exited your house. Once you are out of your house, you call tell the 911 dispatcher the exact location and any other information they may ask you for. The dispatcher may also want you to stay on the line until the fire department arrives – something you can’t do if you’re in a burning home.

If your house is on fire, never reenter it for any reason until the firefighters say it is safe to do so.

I once investigated a case where a mother went back into the burning house to find her other children, and her toddler followed her. While the mom made it back out, the toddler did not. Your life is important. Let the firefighters handle the rescues.

8. Never leave a burning candle in a room by itself

If you light a candle and forget about it, it may cause a fire. This happens more often than most realize. In 2018, there were 7,500 candle fires in the U.S. In 16% of the candle fires, the candles were unattended or abandoned.

Be especially careful with candles during the holidays, which are the peak time for candle fires. This is because candles are often too close to holiday decorations, which can easily catch fire.

While technology in space heaters has improved over the past 20 years, never leave a radiant space heater unattended and never fall asleep with one on. I once had to tell a 9-year-old boy, two days after Christmas, that he lost his mother, father and sister in a fire that started because of a radiant space heater. One of the children’s blankets came in contact with the heater and started the fire. When possible, you should rely on the normal heating system for the home. Use space heaters with caution.

10. Get a fire extinguisher

The ideal extinguisher for the home is the multipurpose type that can put out fires of all different types, like electrical and liquid. These extinguishers are small enough that they can be easily handled and can extinguish or stall the fire until firefighters arrive. Familiarize yourself with how it operates prior to needing it for an emergency.

Just like smoke detectors, you also should check your fire extinguishers twice a year to see that they are pressurized and functional.

If practiced as a family, following these simple steps could make the difference between whether you escape a house fire or become the next statistic. 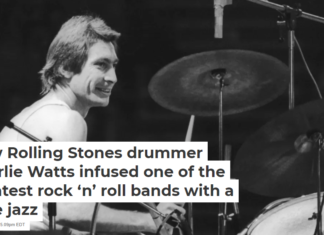 How Rolling Stones drummer Charlie Watts infused one of the greatest...

Staff Writer - August 24, 2021
Victor Coelho, Boston University In an era when rock drummers were larger-than-life showmen with big kits and egos to...

Why is low-carbon energy innovation so slow? You can thank Economics...