The contest, intended to expand the power and influence of women in the United States by 2030, garnered more than 550 proposals. On July 29, 2021, French Gates and Scott announced the winners: Four initiatives will each receive US$10 million, and two more will get $4 million apiece. In addition to the women formerly married to Microsoft co-founder Bill Gates and Amazon founder Jeff Bezos, Charles and Lynn Schusterman Family Philanthropies is providing some of these funds.

It marks the first official donor collaboration between French Gates and Scott. The money will help boost support for caregivers, get more women and girls to embark on technology careers, support entrepreneurship among Indigenous women, counter intimate-partner violence and train more women to become political leaders.

As experts in women’s giving and giving to women’s and girls’ causes at the Women’s Philanthropy Institute, we believe that this new partnership is significant for three reasons.

1. There is a worldwide effort to increase gender equity

Both donors have previously made causes tied to women and girls a priority in their giving. For example, they signed on as the initial contributors to a Gender Fund, announced on June 28, 2021, that aims to raise $1 billion over the next decade to support organizations, mostly led by women, that operate in low-income countries.

This is, to be clear, an international effort that also includes foreign aid.

A United Nations conference held in Paris in June 2021 drew pledges from countries, individuals and foundations totaling more than $40 billion for causes such as ending forced marriage and bringing about greater parity in pay for women. The Bill & Melinda Gates Foundation, which French Gates continues to co-chair following her divorce, said it would contribute $2.1 billion from its coffers toward that global goal.

2. US donors are underfunding these causes

While the $48 million being donated through this contest is a tiny sliver of the $40 billion pledged for these causes, it could send a strong signal to other U.S. donors.

Just 1.6% of philanthropic dollars in America support women’s and girls’ organizations, according to research we have done with our colleagues. This percentage didn’t budge from 2012 to 2017 – the most recent year for which data is available – even though overall charitable giving has grown substantially, reaching $471.44 billion in 2020.

We have also found that organizations serving women and girls tend to be smaller than other charities, both in terms of the money they spend and the number of people they employ.

3. They can boost enthusiasm for giving to causes serving women and girls

French Gates and Scott have the potential to give far more than $48 million to causes like these in the future.

Scott has disclosed having donated at least $8.5 billion since 2020, an amount that represents an estimated 14% of her present net worth. But her wealth continues to grow at an even faster rate – leaving her with more funds to distribute.

The value of the assets French Gates has remains unclear, even now that her divorce is final. As of July 2021, she and her ex-husband had put $65 billion into the Bill & Melinda Gates Foundation. French Gates also engages separately in philanthropy, venture capitalism and policy-related activities through her own firm, Pivotal Ventures.

Together with our colleagues we have found that women and men alike pay attention when women give to women’s and girls’ causes.

That is, French Gates and Scott can do more to increase philanthropy for women and girls than by giving away large portions of their own fortunes. By drawing attention to these donations, they can encourage others – both those with great wealth at their disposal and those of more modest means – to support these causes. 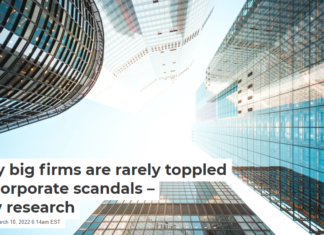 Why big firms are rarely toppled by corporate scandals – new...