This story was co-published with The New York Times’ The Upshot.

If the federal government’s new Open Payments website were a consumer product, it would be returned to the manufacturer for a full refund.

In a news release announcing the site’s launch, the Centers for Medicare and Medicaid Services said the goal is “to help consumers understand the financial relationships between the health care industry, and physicians and teaching hospitals.”

If that’s the goal, the agency hasn’t come anywhere near fulfilling it.

As a health care journalist at ProPublica, I’m reasonably competent at analyzing data, plus I’m lucky to have another data reporter and a news application developer helping me. Still, it took us hours just to upload the data onto our servers so that we could dig into it. We published our initial observations Tuesday night. Other journalists took to Twitter with theirs.

“Seriously, this is a headache,” one tweeted Tuesday afternoon.

“It’s a mess,” another replied.

But we’re all paid to deal with such pain.

Good luck to the consumers heading to the website to see if their doctors are getting money from drug and device makers. Or the doctors trying to check whether they or their colleagues are in it. “I cannot figure out how to search myself,” Pittsburgh urologist Benjamin J. Davies tweeted Tuesday.

Let’s start from the beginning. When you arrive on the Open Payments website, there’s no prominent search box. On most such websites, a search tool is the first thing you see. (That’s the case on ProPublica’s Dollars for Docs site, which pulls together payments made by 17 drug companies since 2010. Disclosure: Some might consider Dollars for Docs competitive with the Open Payments site.)

Instead, to see the Open Payments data, you have to figure out that a link, helpfully labeled ” Interact with full data sets,” under the heading “Explore the Data” is your key to opening the payment box.

Oh wait, you won’t actually find the data there. Instead, you’ll see a link to an extremely unfriendly 51-page ” data dictionary and methodology document” and a link to the Data Explorer Tool with instructions on how to use it. So, OK, now you’re ready to go?

Again, no. When you click that, you see 14 links to seven different data sets (each one has two links.) If you aren’t well-versed in the topic, it’s not at all clear which, if any, of these you should care about. One listing, for instance, describes a general payment as “non-research, non-ownership related.” Huh?

If you’ve spent the past months, as I have, trying to understand the new reporting system, you might know that, in Open Payment lingo, “general payment” refers to money spent on speakers, consultants, meals, travel, gifts and the like. The other main file types are research payments, ownership payments and a directory of payees.

The search box at the top left of the page allows you to look through all of the databases for one name at a time. But then you have to click on each of the databases to see the results. And when you do that, you’ll find that the database is more than 60 columns wide, much of it gobbledygook that most people won’t understand.

What you won’t find—and you should—is a prominent warning that 40 percent of the 4.4 million records released Tuesday are missing the names of doctors and teaching hospitals that received the payments. That’s right, there are 1.7 million records that tell you how much a company spent but not who got it. This is because of inconsistencies and other problems. So, if your doctor doesn’t appear in a search, it doesn’t necessarily mean that he or she didn’t receive a payment.

All of this, of course, is assuming the website works at all. Several users reported seeing error messages like this one, tweeted by Alex Walsh, a reporter at the Birmingham News.

CMS and CGI Federal had plenty of time to create the site: It was mandated in the 2010 Affordable Care Act, and CMS released final regulations for it in February 2013.

The agency did manage to meet its self-imposed deadline (though only after pushing it back to 18 months beyond what Congress called for). But after the fumbled launch of Healthcare.gov, it might have been better if agency officials had pushed this off until it was in better shape.

CMS officials said Tuesday that they expected to release additional consumer-friendly tools soon, but that might be too late. Consumers who try the site now or read news articles about it will soon discover its shortcomings.  If and when the site becomes more consumer-friendly, these potential users will quite likely have moved on.

Have you used the Open Payments website? Tell us what you think by emailing Charles.ornstein@propublica.org. You can also look up your doctor in our Dollars for Docs tool. 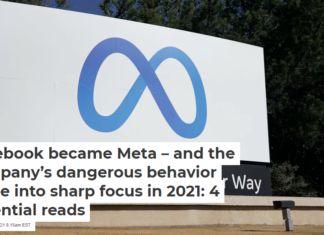 Facebook became Meta – and the company’s dangerous behavior came into...

Staff Writer - January 1, 2022
Eric Smalley, The Conversation Meta, née Facebook, had a rough year in 2021, in public opinion if not financially....