When it comes to news literacy, schools often emphasize fact-checking and hoax-spotting. But as I argue in my new book, schools must go deeper with how they teach the subject if they want to help students thrive in a democratic society.

As a new poll shows that Americans struggle to know if the information they find online is true, news literacy remains essential in student education.

Separating fact from fiction is a vital skill for civic engagement, but students can be good fact-checkers only if they have a broader understanding of how news and information are produced and consumed in the digital age. Here are five questions students should be taught to ask.

Fortunately, fake news is only a small part of the information most people consume. But real news – where journalists are paid to produce original reporting about their communities – is disappearing due to a combination of declining revenue and industry consolidation. Most people have no idea this is happening. Hundreds of communities have lost all local news, and both print and digital outlets face layoffs and cuts.

Most people say they get news from social media even though they don’t really trust it, and sites like Facebook and Google soak up the majority of digital ad revenue without producing any original content. It’s important to avoid fake news, but it’s even more important to seek out and engage with real news. That means cutting out social media middlemen and sticking with established brands that do their own reporting, hold themselves accountable for errors and minimize conflicts of interest.

2. How is news constructed?

Even at its best, news is a representation of reality, not reality itself. News producers desperate to get “both sides” of a story can create false equivalence, as they have on issues like global warming where only one side is supported by actual evidence. An obsession with balance suggests there are always two equal and opposite sides to every story even when this is not the case.

News stories are framed in ways that affect how we view things. When it comes to elections, for instance, horse-race coverage dominates. There is a narrow focus on polling and scandal. Actual policy coverage is often scant, as it was during the 2016 election. News frames also can lead to misrepresentations of minority groups in news coverage, which can create and perpetuate harmful stereotypes. When we critique news, it’s easy to get distracted by a desire to root out political bias. But to be news literate, one should pay more attention to the routine practices that influence news content.

It’s tempting to think of the digital media giants as indifferent information services that simply prioritize the most important news and information. However, that’s far from the reality. Algorithms are the secret computer code that try to predict what will keep you engaged, and they’re baked into news feeds, search results, recommendations, trending topics and autocomplete.

Algorithms based on popularity can amplify all kinds of misinformation and extremist rhetoric that serves only to mislead, confuse, anger and divide.

Algorithms also reflect our own biases and can cater to our preexisting beliefs, even those that are false, by showing us more of what we already think we know. Fears about algorithmic filter bubbles may have been overblown, but there is still a need to be on guard against confirmation bias, where we favor information that fits with our beliefs.

4. Am I the customer or the product?

In today’s digital economy, the race is on among multi-billion-dollar companies like Facebook and Google to get and keep your attention in order to make money. Selling eyeballs to advertisers is a century-old business model, but the internet makes pre-digital advertising look quaint. The trail of digital data you leave – both online and offline – is what makes you especially valuable. Some digital marketers claim to have as many as 5,000 data points on the average American, as we learned from the Cambridge Analytica scandal.

Data, it is often said, is now a more valuable commodity than oil, and it’s used to manipulate our behavior through product ads and political messages. It’s a far cry from the democratic ideals of the early internet, and news literacy requires knowledge of these hidden costs of going online so we can make informed decisions about where we choose to direct our attention.

5. Is there a better way to support a well-informed society?

As my students ask, why does it have to be so hard to get reliable information? It’s almost like it’s difficult by design. Like fish in water, we are immersed in this news environment, which can make it hard to consider alternatives. But if we exercise our sociological imaginations, we can step back and ask what we really want for ourselves and our society. What would an ideal news environment look like?

If we think of news as a public good like clean air or water, it’s easy to see how we could all benefit from a news environment that’s at least partly protected from toxic commercial pressures. Most other democratic nations far outspend the U.S. on independent, nonpartisan public and nonprofit media, which helps support a more informed and engaged citizenry. Many governments also have increased oversight of social media to target misinformation and protect privacy.

News literacy alone is not a panacea, but by asking some simple questions, we can start to make sure every citizen is equipped with the knowledge they need to navigate the news landscape and make democracy work. 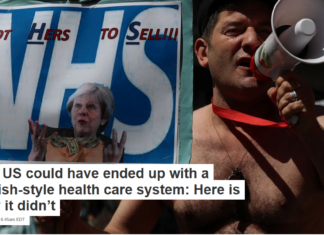 Staff Writer - May 27, 2019
Simon F. Haeder, West Virginia University The role of government in the U.S. health care system has been contentious long before the recent emergence of...

Could leading anti-malarial be used as an experimental treatment for bowel...

Why do so many Americans now support legalizing marijuana?