While the daily death toll of COVID-19 understandably dominates health news, smoking remains the leading cause of preventable death in the UK. As the UK teeters on the edge of Brexit, newly found freedom from EU regulations could be an opportunity for the government to impose even tighter tobacco restrictions. But will it seize the moment?

At the time of writing, more than 60,000 people have died in the UK within 28 days of a positive COVID test, a tragically high number. In comparison, 95,000 people die every year from smoking, with 30 times as many suffering from serious smoking-related illnesses.

In 2019, one in seven UK adults were smokers, and smoking was responsible for 50% of the difference in life expectancy between rich and poor. If the government wants to keep its promise of making England and Scotland “smoke-free” by 2030, and 2034 respectively, reducing tobacco use needs to remain a public health priority.

After almost 50 years of EU membership, the UK economy is tightly woven into that of the EU single market. Many UK laws and regulations have their origins in the EU, including those concerning tobacco. In our recent research, we explored what Brexit means for tobacco control in the UK.

We found that the EU is significantly involved in the supply of tobacco products to the UK, and the way they are taxed and regulated. The decision to leave the EU, and the nature of any future trade deals, will therefore have a significant impact on tobacco regulation, and subsequently public health in the country.

While the UK was a member of the EU, and during the transition phase until the end of 2020, it has had to conform to all relevant EU rules relating to tobacco products. Almost all of these are likely to continue to apply to the UK post-Brexit because they have already been incorporated into UK law. Some have even been extended by the UK, such as plain tobacco packaging, which is not required by EU directives.

No longer legally bound to EU legislation after Brexit, the UK has the opportunity to make significant changes to its tobacco control policies. The UK will no longer have to endure EU processes that involve negotiation and compromise and can take over a decade.

There is a chance for tobacco control to become more nimble and flexible, better able to respond to tobacco industry tactics such as the recent launch of cigarette-like cigarillos to bypass the recent ban on menthol cigarettes. Counter to that, existing regulations could also be weakened or removed – which would be a public health disaster.

Tobacco taxation neatly illustrates both the flexibility and pitfalls inherent in Brexit. The EU Tobacco Tax Directive specifies minimum rates of tobacco taxation across the EU, but also the different type of tax that can or must be used to tax tobacco products. Minimum tax levels have helped tobacco control in the UK by reducing the difference between UK tax rates and the much lower ones applied in most other EU countries, which gave smokers the incentive to import cheap EU duty-paid tobacco in bulk.

Today, more than 96% of tobacco products sold in the UK are imported from the EU. Without a trade deal between the UK and EU, these imports will be subject to the UK global tariff from January 1 2021. We estimate these would add about 30p to the price of a typical pack of 20 cigarettes, and £1.77 to a 30g pouch of tobacco for rolling your own cigarettes. They would also raise something like £820 million in new tax revenue for the UK government.

Higher prices are one of the most effective ways to reduce tobacco consumption. An issue with EU rules has been that they limit how tobacco products can be taxed, and what other price-related policies can be adopted. After Brexit, the UK could enjoy greater freedom to adopt types of tobacco tax that raise the price of tobacco products, as well as direct pricing regulations such as minimum prices, or the imposition of price caps.

However, the UK will lose out on not being able to influence future EU directives on tax. Given the UK is a world leader in tobacco control, this lack of influence might result in greater differences between UK and EU tax policies.

The UK already has high tobacco taxes. But the global tariff will exceed the increases in tobacco tax implemented on November 16, which added 22p to the cost of a pack of 20 cigarettes and 65p to a 30g pouch of tobacco. Since higher prices are one of the most effective tobacco control measures, this might be a rare positive from having to trade with the EU on World Trade Organisation terms.

Ultimately Brexit could help or hinder tobacco control in the UK, depending on whether the UK government has the political will to take advantage of its new found flexibility. In this regard, the signs look mixed. A long-standing desire for free markets, and links between some senior Conservative politicians and free-market thinktanks such as the tobacco industry-funded Institute of Economic Affairs, raise concerns about whether, post-Brexit, the government will deliver in practice what it has promised in principle.

Then again, the government recently reiterated its ambition for England to be smoke-free by 2030, said its “commitment to tough tobacco control will continue after 1 January 2021”, and also implemented the November increase to tobacco taxes. So maybe there are grounds for quiet hope that the UK will remain a global leader in tobacco control. 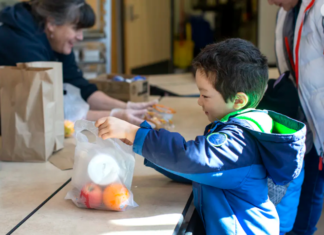 Changes are coming to school meals nationwide – an expert in...

Staff Writer - June 9, 2022
Marlene B. Schwartz, University of Connecticut For the two years during the COVID-19 pandemic, U.S. public schools have been...