Action has also come at the federal level with President Donald Trump’s March 21 executive order on campus free speech. There have also been calls to add campus speech protections to the Higher Education Act. This legislation is the main federal law dealing with higher education.

The focus in legislation or actions like President Trump’s executive order has mostly been on public colleges. These institutions also must already follow First Amendment rules when it comes to student speech on campus.

But, the recent executive order applies to private schools as well. The president called on federal agencies that provide funding to institutions to make sure that private colleges are enforcing campus speech rules the same way for all students or risk losing federal funds.

As a researcher of higher education law, especially issues about free speech, I support legislative efforts to stop public colleges from restricting student speakers to only small parts on campus. However, I also am concerned that some legislative proposals may cause discrimination against students, be unworkable and put a chilling effect on student free speech.

Kentucky and Iowa passed campus speech laws in March and became the latest in a growing list of states to do so.

Like legislation in other states, a main purpose of the Kentucky and Iowa laws is to make outdoor campus areas generally available for student speech. In doing so, the laws prohibit “speech zones.” These zones are used by some colleges to restrict student speech, including protest activity, to specific places on campus. In Kentucky, a person can also sue a college or its employees for violating their rights under the law.

Interest in campus free speech legislation among elected officials has largely been driven by a belief that conservative speakers on college campuses are under threat. To appeal to supporters with such views, President Donald Trump was likely convinced to issue his March 2019 executive order on campus free speech. The view that conservative speakers on campus face harassment has also been behind calls to put campus speech protections in the Higher Education Act.

Conservative advocacy groups like Turning Point USA and the Young America’s Foundation have argued for the need to protect conservative speakers on campus. The right-leaning Goldwater Institute, another organization that views free speech as being in danger in higher education, has produced model campus speech legislation. This model legislation has influenced proposed and enacted laws in several states.

In my view, groups like Turning Point USA and the Young America’s Foundation are most interested in promoting a conservative political agenda. Their interests differ sharply from organizations like the American Civil Liberties Union (ACLU) or the Foundation for Individual Rights in Education (FIRE), which has sponsored its own model legislation. These groups seek to protect student speech on college campuses of all types, whether liberal or conservative.

In contrast, organizations like the Young America’s Foundation or political leaders like former U.S. Attorney General Jeff Sessions focus on alleged liberal abuses of free speech in higher education, including at private colleges. But, questionable speech practices are not confined to people or colleges that support liberal political views. Liberty University, a private college whose president is a prominent Trump supporter, has censored student speech multiple times. For instance, Liberty University officials dismissed student journalists for writing news stories viewed as too critical of the school by university administrators.

PEN America is a group that advocates for broad protections for free speech, including in higher education. In April, PEN America released a report that shows how challenges to campus free speech can come from either the political left or right. It also rejects the idea of a free speech crisis in higher education like that claimed by groups like Turning Point USA, whose founder was praised by President Trump when he signed his recent campus speech executive order.

I agree with those who say there is no free speech crisis on college campuses. Be that as it may, claims of a crisis have helped create support for campus speech legislation.

What happens when a state adopts a campus free speech law?

Some language in campus speech legislation may be largely symbolic and not change what many colleges are already doing. President Trump’s recent executive order provides a good example of such an approach. It did not place any new duties on colleges not already called for in current law.

But, some provisions in legislation could change campus speech rules in important ways.

For example, the Goldwater Institute’s model legislation contains a requirement for neutrality by administrators on controversial public matters. Whether a college’s leaders have remained neutral on public controversies would also be subject to review by a state-level Committee on Free Expression that would issue official reports of its findings to the governor and state legislators. A state has yet to adopt this part of the model legislation.

But, according to a recent analysis, the legislation has been introduced in at least 13 states, and parts of it were included in laws approved in Arizona, North Carolina and Colorado.

The model legislation does not define when a topic qualifies as controversial or the limits of neutrality. For instance, many colleges have football teams, and debate currently exists over the long-term cognitive effects on players who participate in the sport. Under the model legislation, would the state-level Committee on Free Expression have authority to decide when university leaders could and could not speak on public matters like these?

Campus free speech legislation could also end up reducing student speech rights in some instances, an issue raised by PEN America. For instance, forcing colleges to punish students who disrupt campus speakers could actually have a chilling effect on student free speech.

States with such requirements in their campus speech laws include Arizona and North Carolina. Wisconsin has not passed a campus speech law, but after a legislation was introduced, the Wisconsin Board of Regents adopted one of the strictest rules in the nation for students who disrupt speakers on campus. It requires that students who violate the rule three times and disrupt speakers must be expelled.

Such concerns have been raised about the new campus speech law in Kentucky. The legislation was opposed by the ACLU of Kentucky over worries that it could be used to block speech by counterprotesters on campuses.

Campus free speech laws may also lead to discrimination against students. For example, under Iowa’s new law, public colleges cannot refuse funding for student groups that deny leadership positions to students based on their identity, such as on the basis of sexual orientation.

These student organizations often receive funding from fees paid by students. This means students in Iowa and other states with similar legislation pay fees that help support student groups that can exclude them from membership or leadership roles based on reasons like their sexual orientation or gender identity.

I believe in strong protections for student speech rights on college campuses. But some legislation could harm rather than help free speech in higher education. 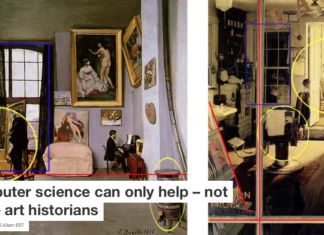 Staff Writer - December 11, 2014
By Ahmed Elgammal, Rutgers University I was the lead of a team of computer scientists at Rutgers that published a paper this past August titled,...

You’re not going far from home – and neither are the...