By Rob MacKenzie, University of Birmingham

To exaggerate is human, and scientists are human. Exaggeration and the complementary art of simplification are the basic rhetorical tools of human intercourse. So yes, scientists do exaggerate.

So do politicians, perhaps even when, as the UK’s former environment secretary Owen Paterson did, they claim that climate change forecasts are “widely exaggerated”.

A more pertinent question is: does the way in which scientists and politicians speak publicly lead to wild exaggeration? When both are engaged in advocacy, there is little difference; both politicians and scientists will use whatever rhetorical devices they have to win an argument.

But this is not the case when scientists speak publicly through their own very special form of mass media, the peer-reviewed literature. In peer-review, statements that do not follow deductively from the data are subject to forensic examination and often expunged, or at least subjected to the “death by caveat” that makes so much academic writing almost indigestible.

Peer-review is by no means flawless, as it is a human procedure and so is subject to the same blind spots and groupthink of every human endeavour. Nevertheless, it does tend to make scientists cautious in their statements and wary of adversarial debate. The peer-review process is becoming more transparent, which may not remove its biases completely, but will allow them to be discovered more easily.

The world is a complicated place, and understanding – let alone predicting – the climate requires consideration of each compartment of the environment: the atmosphere, ocean, land, and ice. In each compartment, physical, chemical, and biological processes interact strongly.

Faced with such complexity, scientists have adopted a hierarchical approach to knowledge generation. This means using highly simplified conceptual models to sketch out the limits of the system; analyses of intermediate complexity to scope out the broad-brush behaviour; and models of often mind-numbing intricacy to attempt to simulate the “real thing”.

These models of reality can be physical or computational: in the Birmingham Institute of Forest Research we are building a physical model of future ecosystem behaviour which bears comparison with the Large Hadron Collider in its ambition and complexity. Even so, we will be pressed on, and perhaps even criticised for, the simplifications we have had to make in order to set up a manageable and affordable experiment. Such is the life scientific.

Our results may lie at the extreme end of our current best guesses (forcing us to make further corroborative experiments), or may lie comfortably in the middle (hence improving our confidence) – in neither case will they be adequately described as exaggeration.

In general, limiting or extreme results come about because a simplified analysis is missing an important feedback or because an intricate model is being “exercised” by simulating an extreme scenario.

Yet such simplifications are the stuff of science. Galileo, for instance, was only able to develop his ideas on gravity by ignoring air resistance. He simplified things to get at a fundamental property of the world about us. This process represents exaggeration only when the results are taken out of their experimental context.

Scientists, wandering unwarily into the realm of advocacy, may be guilty of taking the results out of context, as may be activists and politicians, but it is not the science itself that is “widely exaggerated”.

Is UK energy policy informed solely by the exaggerations of advocacy – political or scientific – or, at least in part, by the exaggeration-phobic scientific literature? As a taxpayer I would like to believe that physical and computer models provide evidence to politicians who use it to assess the strength of the arguments of the various advocacy groups. I am not so politically naïve as to believe that all policy is, or even should be, based solely on objective evidence.

I do hope, though, that claims of scientific exaggeration are seen for what they are: advocacy targeted not just at winning the rhetorical argument but also aimed, rather cynically, at undermining the evidence. 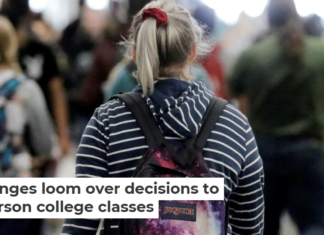 Staff Writer - July 4, 2020
Neta C. Crawford, Boston University By early July, about 80% of U.S. campuses were planning to resume at least some in-person instruction, even as a...

Medical technologies have been central to US pandemic response – but...