Compared to the Apple keynote that launched the iPhone 6/6+ and Apple Watch, the follow up iPad event was always going to be a low-key affair. That the new iPad Air 2 and iPad Mini 3 bring only long-expected features and that gives them the feel of yesterday’s news – not a good thing when iPad sales are down almost 10% in a market filled with other choices.

Despite the rumours of a gigantic iPad or hybrid laptop/tablet models, Apple stuck with the same form factors but made them even thinner: the iPad Air 2 is now just 6.1mm thick.

The Air 2 comes with this year’s A8X processor, which Apple claims is 40% faster than the previous A7 model, and a graphics chip that boasts 2.5x the speed. It also gains a better 8mp camera that supports high-resolution 1080p video, and software in iOS 8 that allows for slow-motion, burst mode, and time lapse recording. It also includes the TouchID fingerprint reader, first introduced in the iPhone 5S and also found on the latest iPhone models.

What is unusual is that Apple now has several devices competing for the same market space. The top of the range iPhone 6+ and the iPad Mini 3 are roughly the same size, and this update doesn’t really do enough to differentiate them. Don’t be surprised if the mini disappears within two years as the larger iPhone drops in price.

Apple will also continue to sell previous versions of its iPads, with a model that sits at every point in the price range, from £199 for the oldest Mini model to an eye-watering £629 for the largest, newest iPad Air 2. It seems crowded, but perhaps this is Apple’s gambit to chase off other tablet manufacturers looking to compete on price.

The recent announcement of a collaboration with IBM signals a reversal of Apple’s shyness toward the corporate market. Perhaps the introduction of TouchID and better support for locking down devices’ contents more securely will make an iPad-enabled business more appealing. The issue here is the cost: many organisations choose the cheapest android model available, locking it into a single application. When it breaks, they are simply replaced. This may explain the thinking behind keeping many iPad models on the market.

The big reveal in the keynote was the introduction of a retina display to the iMac: a 27” machine with a jaw-dropping 5120×2880 screen. This is big enough to allow the editing of super-high-resolution 4K videos, at full size, with space around it for the panels and windows of the editing software – you could call it a 5K screen. It starts from £1,999 which, considering the cost of a 4K screen is very good value. The Mac Mini also gets an update – still an entry-level desktop for many people, requiring a separate keyboard, mouse and monitor, it gets the latest processors based on Intel’s Haswell core, and the price falls to £399.

Apple’s productivity suite gets an upgrade on both OS X and iOS. The latest version of its desktop operating system, Yosemite, was revealed over the summer and is released today. As Apple promised last year, the annual upgrades to the operating system will now come for free.

Are these updates to the iPad line enough to reinvigorate Apples sales in the tablet market? Probably not. The biggest problem for Apple is that the market is saturated, with cheaper alternatives or second-hand iPads that can run iOS 8 perfectly well.

With a crowded range of iPads and devices competing in the same space, perhaps the lessons learned when Steve Jobs returned to Apple in the late 1990s have been forgotten: manufacture few things, ensure they are of the highest quality and be prepared to sacrifice lines.

As with all Apple devices, the new iPads are extremely well engineered, but there’s simply not enough to differentiate them from the other models – that they are now available in a gold colour isn’t enough to make them a must-buy.

Barry Avery does not work for, consult to, own shares in or receive funding from any company or organisation that would benefit from this article, and has no relevant affiliations. 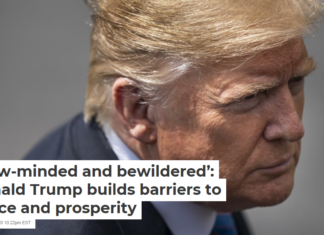 Staff Writer - January 24, 2020
John Hawkins, University of Canberra The US president “had no plan, no scheme, no constructive ideas whatever”, according to one of the world’s most influential...

In Egypt, where a meal isn’t complete without bread, war in...