Does the Clinton email issue represent mere sound and fury or is it a real controversy about government transparency?

Let’s examine the facts, as reported by the New York Times and the Associated Press.

While Secretary of State, Hillary Clinton never used a governmental email account. Instead, she used a private email account maintained on a server located in her Chappaqua, New York home. Last year, she turned over a selection of her email records to the State Department, which has begun the slow process of determining which of those emails might be released to the public.

Is this really a problem?

The current Secretary of State, John Kerry, doesn’t seem to think this is an issue. But a closer look reveals a lack of respect by Clinton for the principle of democratic accountability.

Her email practice is inconsistent with the rhetoric on openness generated by the Obama administration during her tenure as Secretary of State, as well as by her husband’s administration between 1993 and 2000. More importantly, Clinton’s action provides a license for the governments of more fragile democracies abroad to evade their own transparency rules.

Clearly, Secretary Clinton isn’t the first government official to use private email to circumvent laws intended to preserve government records and make them accessible to the public. But she may have set a new standard for evasion by relying exclusively on private email, and setting up a server dedicated to that purpose.

Clinton may have been attempting to preserve her own power to determine which of those emails would enter the public domain, either through congressional inquiries, Freedom of Information Act (FOIA) requests, or eventually through research in government archives. Clinton would no longer have to rely the judgment of government lawyers, FOIA officers, and archivists about the release of potentially damaging emails.

Now, suppose that this practice was adopted more broadly. Imagine that all those working for the federal government decided that they should have the right to do what Clinton has done. (That’s roughly 4.2 million people, by the way.) Or suppose that state and local officials (another 15 million people) also took the view that what is good enough for Mrs Clinton is good enough for them.

Clinton’s practice versus promises of openness

Some commentators have emphasized that Mrs Clinton, a survivor of several intense political battles, has particularly strong reasons for wanting to control access to her emails. Perhaps so – but Clinton has also been associated with administrations that made powerful statements about the importance of promoting governmental openness.

In October 1993, for example, President Bill Clinton sent a memorandum to federal department heads emphasizing “the fundamental principle that an informed citizenry is essential to the democratic process and that the more people know about their government the better they will be governed.”

The Clinton administration also exported the rhetoric of openness. It was one of the main sponsors of the 2000 Warsaw Declaration, which upheld the principle that government institutions should be “transparent, participatory and fully accountable.” The administration encouraged new democracies to adopt laws like the US Freedom of Information Act.

The Obama administration, in which Mrs. Clinton served from 2009 to 2013, made an even more forceful commitment to the principle of transparency.

On his first day in office, President Obama sent a memorandum to Secretary Clinton and other heads of executive departments emphasizing that his administration “is committed to creating an unprecedented level of openness in Government.” Transparency, Obama said, strengthens democracy, promotes accountability, and builds public trust.

Obama reinforced this message with a second memorandum, sent on the same day, also addressed to Secretary Clinton and other heads of executive departments. It focused specifically on the implementation of the Freedom of Information Act.

FOIA, Obama reminded the department heads, “is the most prominent expression of a profound national commitment to ensuring an open Government.” Clinton and her colleagues were warned that government agencies should “adopt a presumption in favor of disclosure” and that decisions to withhold information “should never be based on an effort to protect Government officials at the expense of those they are supposed to serve.”

The Obama administration renewed its commitment to openness when it launched the Open Government Partnership in 2011.

The OGP is an international project that requires individual countries to report on their progress toward increased transparency.

The United States produced its first national action plan for the OGP in September 2011. Open government, the plan said, was a “high priority” for the Obama administration. The plan recognized that “the backbone of a transparent and accountable government is strong records management that documents the decisions and actions of the Federal Government.”

At the OGP’s launch in 2012, Clinton criticized “governments that hide from public view and dismiss the idea of openness.” Her State Department emphasized the need for “political leadership” to promote transparent government. The department was represented on the working group responsible for developing the overall US action plan on openness, and also produced its own departmental Open Government Plan in 2011 that “reflects the personal commitment of the Secretary of State … to the principles and practices of Open Government.”

The issue isn’t just whether Clinton complied with federal law. Over the years, Clinton subscribed to a higher standard on transparency. Her decision to privatize her email communications is not consistent with the strong statements on openness made by the Clinton and Obama administrations, and even her own State Department.

Her action will encourage government officials at home and abroad to walk away from their own promises on transparency. The revelations come at a particularly bad time for advocates of openness. As a recent Brookings Institution study observes, there is a rising tide of resistance to the principle of transparency in the United States. And, as I’ve noted elsewhere, there is a similar backlash internationally.

For years, Clinton talked a good game on transparency. But in management of her email, she has fallen far short of the ideal. 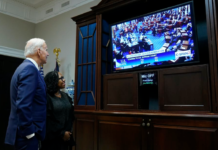 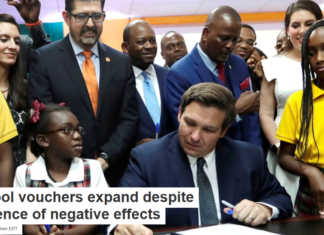 Staff Writer - June 16, 2019
Christopher Lubienski, Indiana University and Joel R Malin, Miami University For the past couple of decades, proponents of vouchers for private schools have been pushing...