America’s CEOs have become increasingly active on political issues that they would have shunned in prior years.

The latest example came in response to the Trump administration’s “zero tolerance” border enforcement policy that led to the forced separation of several thousand immigrant children from their detained parents. United Continental CEO Oscar Munoz called the policy “in deep conflict with our company’s values.”

United and fellow airlines American, Southwest and Frontier each indicated they didn’t want the government to use their planes to fly separated children. President Donald Trump hoped to quell the furor over the issue by signing an executive order ending the separations.

It’s certainly not the first time corporate CEOs took a stand against a Trump policy or his words. After the president’s contentious response to violent clashes in Charlottesville, Virginia, CEO resignations and denunciations led to the dissolution of two White House advisory councils.

While Trump’s actions likely sparked this increase in political activism by corporate CEOs, its roots run deeper and will survive beyond the end of the current administration.

From custom abiders to bullies

When I first began studying the interactions between social movements and corporations in the 1990s, it was rare to see business take a public stand on social issues. Yet today we see organizations ranging from General Electric to the NCAA weighing in on, for example, transgender rights, something hard to imagine even a decade ago.

Traditionally, corporations aimed to be scrupulously neutral on social issues. No one doubted that corporations exercised power, but it was over bread-and-butter economic issues like trade and taxes, not social issues. There seemed little to be gained by activism on potentially divisive issues, particularly for consumer brands.

A watershed of the civil rights movement, for example, was the 1960 sit-in protest by students that began at a segregated lunch counter in a Woolworth store in Greensboro, North Carolina, and spread across the South. Woolworth’s corporate policy had been to “abide by local custom” and keep black and white patrons separated. By supporting the status quo, Woolworth and others like it stood in the way of progress.

But negative publicity led to substantial lost business, and Woolworth eventually relented. In July, four months after the protest started – and after the students had gone home for the summer – the manager of the Greensboro store quietly integrated his lunch counter.

In general, companies were more worried about the costs of taking a more liberal stand on such issues, a point basketball legend and Nike pitchman Michael Jordan made succinctly in 1990. Asked to support Democrat Harvey Gantt’s campaign to replace segregationist incumbent Jesse Helms as a North Carolina senator, Jordan declined, reportedly saying “Republicans buy sneakers, too.”

And companies presumed that taking controversial positions would lead to boycotts by those on the other side. That’s what happened to Walt Disney in 1996 as a result of its early support for gay rights, such as “Gay Day” at its theme parks. Its stand prompted groups including America’s largest Protestant denomination, the Southern Baptists, to launch a boycott, calling Disney’s support for gay rights an “anti-Christian and anti-family direction.” The eight-year boycott, however, was notably ineffective at changing Disney policy. It turns out that too few parents had the heart to deny their children Disney products to make a boycott effective.

Since then, some of the biggest U.S. companies have taken similar stands, in spite of the reaction from conservatives. For example, when the Arkansas legislature passed a bill in March 2015 that would have enabled LGBT discrimination on the grounds of “religious freedom,” the CEO of Walmart urged the governor to veto the bill.

Not surprisingly, given Walmart’s status in the state and the corporate backlash that accompanied a similar law in Indiana, the governor obliged and eventually signed a modified bill. That didn’t sit well with former Louisiana Governor Bobby Jindal, however, who argued in The New York Times that companies in those states were joining “left-wing activists to bully elected officials into backing away from strong protections for religious liberty.” He warned companies against “bullying” Louisiana.

Why have corporations shifted from “abiding local custom” around segregation and other divisive social issues to “bullying elected officials” to support LGBT rights?

In my view, there are two broad changes responsible for this increased corporate social activism.

First, social media and the web have changed the environment for business by making it cheaper and easier for activists to join together to voice their opinions and by making corporate activities more transparent.

The rapid spread of the Occupy movement in the fall of 2011, from Zuccotti Park in New York to encampments across the country, illustrates how social media can enable groups with a compelling message to scale up quickly. Sometimes even online-only movements can be highly effective.

When the Susan G. Komen Foundation cut off funds to Planned Parenthood that were aimed at supporting breast cancer screenings for low-income women, a pop-up social movement arose: Facebook and Twitter exploded with millions of posts and tweets voicing opposition. Within days the policy was walked back.

Mozilla’s appointment of a new CEO who had supported a California ballot proposal banning same-sex marriage also generated outrage online, both inside and outside the organization. He was gone within two weeks.

In each case, social media allowed like-minded “clicktivists” to draw attention to an issue and demonstrate their support for change, quickly and at very little cost. It’s never been cheaper to assemble a virtual protest group, and sometimes (as in the massive Women’s March that took place in cities around the world the day after Trump’s inauguration) online tools enable real-world protest. As such, activism is likely to be a constant for corporations in the future.

A second change is that millennials, as consumers and workers, are highly attuned to a company’s “social value proposition.”

Companies targeting the sensibilities of the young often tout their social missions. Tom’s Shoes and Warby Parker both have “buy a pair, give a pair” programs. Chipotle highlights its sustainability efforts. And Starbucks has promoted fair trade coffee, marriage equality and racial justice more or less successfully. In each case, transparency about corporate practices serves as a check on puffery.

Social mission is even more important when it comes to recruiting. At business school recruiting events, it is almost obligatory that companies describe their LEED-certified workplaces, LGBT-friendly human resource practices and community outreach efforts.

Moreover, our employer signals something about our identity. Value alignment is part of why people stay at their job, and among many millennials, socially progressive values – particularly around LGBT issues – are almost a given.

In this situation, corporate activism may be the sensible course of action, at least when it comes to LGBT issues. According to the Pew Research Center, for example, support for same-sex marriage has doubled from 31 percent in 2004 to 62 percent in 2017, and there is little reason to expect a reversal.

While prominent companies like Starbucks and Target have taken stances associated with liberal causes, some businesses have gone the other direction.

Chick-fil-A aimed to implement “biblical values” and supported anti-gay groups in the 2000s. Those groups returned the favor by encouraging like-minded people to dine there on “Chick-fil-A appreciation day.”

Hobby Lobby famously sought to abstain from providing funding for birth control for employees on religious grounds. Koch Industries, overseen by the famous Koch brothers, has long been a lightning rod for boycotts due to the right-wing proclivities of its dominant owners. And small businesses across the country are not always shy in advertising their conservative political orientations.

As states have seemingly divided into red (for conservative) and blue (for liberal), might we expect the same thing from corporations, as consumers and employees drift toward the brands that best represent their views – red companies and blue companies?

It is already easy to look up political contributions by companies and their employees. For example, Bloomberg, Alphabet and the Pritzker Group lean Democratic; Oracle, Chevron and AT&T tend Republican.

In the current electoral climate, it is not hard to imagine this continuing.

This is an updated version of an article originally published on Sept. 27, 2016. 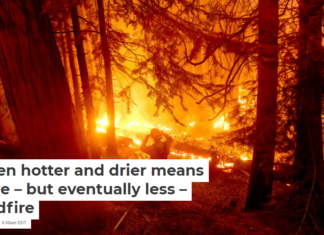 Investors swoon over Bumble’s IPO – but what exactly is an...