Why do people use telescopes to look into space but not binoculars? – Niraj, age 6, Arlington, Massachusetts

But why stop there? Once it gets dark, you can look for the planets in our solar system. The brightest one is usually Jupiter, whose distance from Earth can be six times as far as the Sun. The farthest planet visible to the naked eye is Saturn, which can be twice as far again. Not bad for the eyes you were born with.

Stars are even farther away. Most of the constellations you can see are several hundred light-years away.

If it’s really dark and you know where to look, the Andromeda galaxy is probably the limit for your naked eyes, at 2 million light-years away. Despite that distance, it still appears very big – about the size of your hand at arm’s length. But why is it so hard to see? Because it is so faint. This is a job for binoculars or a telescope.

Telescopes aren’t the only way to see into space

Two eyes are usually better than one.

Your eyes are spaced a few inches apart, so they provide slightly different viewpoints. Thanks to the way the human brain combines the streams of images coming in through two eyes, most people perceive the world with depth in three dimensions, not like a flat picture.

Binoculars are designed to amplify this effect. That’s why wildlife watchers love to use binoculars. Distant birds and animals pop in spectacular 3D, making you feel as though you could reach out and touch them.

This special quality of binoculars works best at distances that aren’t too big compared to how far apart the binoculars’ lenses are. That means it’s not easy to make it work when you’re looking at a star so far away. As a result, astronomers mostly make do with one image. It’s much cheaper and simpler to control one telescope instead of two.

Telescopes have some downsides for beginners, though. Most people looking through an astronomical telescope for the first time are baffled by their astronomer friend’s enthusiastic chatter. Why? Because they see nothing! They’re not used to looking with only one eye – which is pretty tricky to do.

Plus, the view at high magnification is totally unfamiliar: There are no landmarks, no sense of scale or proportion. Only a tiny piece of the sky is visible, often flipped upside down and backwards.

Binoculars – which are basically just two telescopes bolted together – fix all these problems. You can still see what you saw with your own eyes, but in vastly more detail. Everything is brighter. The unfamiliar new things are seen by both eyes, so your brain more easily accepts them as real. Your eyesight has been powered up, rather than replaced.

The tool you use depends on the job at hand

What you’re trying to do dictates whether you should use a telescope or binoculars.

Astronomers have two goals. One: Gather as much light as possible from faint things like galaxies. Two: Create very sharp images, so they can do things like find planets around a distant star.

Most astronomical telescopes start with that first target, acting like light-buckets. They collect millions of times more light than your eye’s tiny pupil, then concentrate it so very faint things can be studied.

To observe something small – like Saturn’s rings, or Jupiter’s clouds – you need a higher-magnification view, perhaps 100X or more. You cannot handhold at magnifications above about 10X; the image gets way too jumpy, so you need a mount, like a tripod.

The tiny field of view means you now also need a way to precisely navigate and track your target as the Earth rotates. Such a mount costs as much as the telescope itself. For most scientific projects, a single point of view is all that is needed, so astronomers overwhelmingly use a telescope.

But for exploring the sky with your own two eyes, the priority is a large field of view. To sweep the magnificent star fields of the Milky Way, or spot the eerie glow surrounding baby stars in the Orion Nebula, binoculars are a great choice.

They are compact, portable and need no mount. They’re a lot cheaper than a decent telescope, too. Get the biggest objective lenses you can (50 mm or more) and keep the magnification low (10X or less).

So why don’t astronomers use binoculars?

Telescopes are not inherently better at looking into space than binoculars. Yes, astronomers’ telescopes, with their gigantic lenses and sturdy support systems, are more powerful than binoculars you can carry. But it just comes down to size. Both tools rely on the same optical principles to do the job.

For a long time, actually, we astronomers have been trying – and mostly failing – to use binoculars to look into space! Merging the images from two separate telescopes is a real challenge. You need perfect images from each, with computers correcting for turbulence about 1,000 times a second. Your brain is so good at automatically combining the information from two eyes that technology hasn’t really caught up yet. 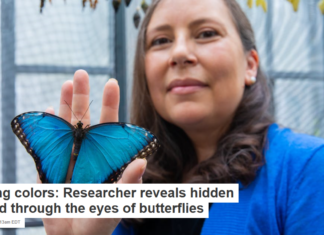 Staff Writer - July 2, 2019
Adriana Briscoe, University of California, Irvine An award-winning scientist and professor of evolutionary biology, Adriana Briscoe studies the evolution of vision in butterflies and how...

Unlike the US, Europe is setting ambitious targets for producing more...