The election is finally over. It has resulted in the most stunning political upset in the modern era.

But that is really just the end of the beginning. The country will require a large amount of healing. That the electorate has expressed record high levels of disgust with the political process, and few believe that the country can be united, does not augur well for the new administration.

And, unlike in the past, America appears as divided over key aspects of foreign policy as it is over domestic policy. So how does President-elect Trump hope that to handle that divide, and what will be the major issues facing him?

At the outset of the Cold War, Republican Sen. Arthur Vandenberg uttered what became a common mantra. Faced with the Soviet threat, he suggested that “politics stopped at the water’s edge.” The American approach to foreign policy was to be bipartisan.

The protests against the Vietnam War dealt a blow to that assumption. But Americans were united in initially supporting the wars in Afghanistan and Iraq, even if Democrats and Republicans were divided on this too a decade later. Indeed, Americans today are as polarized about foreign affairs as they are about domestic matters – and regard them as very important.

In pre-election polls, the economy and job security were ranked the number one issue. But, in fact, this was a foreign policy issue masquerading as a domestic one because it was a debate about the merits of globalization and whether the new president should pursue a free trade agenda.

It’s significant that in these same polls, terrorism ranked second, and foreign policy in general ranked third, in front of health care.

Scholars, unlike the media, often argue about whether individual leadership really matters when it comes to foreign policy. Many argue that American foreign policy is dictated by consistent factors such as the size of its military and its importance to the global economy.

So is it the personality of the leadership, or are broader factors at play in the formulation and implementation of U.S. foreign policy? In a grand experiment, we are about to find out.

And what is likely to preoccupy the new president when it comes to foreign policy over the next four years? I’d identify five challenges – in order of their public visibility, if not their importance – plus a bonus that nobody is yet discussing.

Challenge number one: The Middle East

Americans regard IS as the greatest foreign threat. But clearly, IS’ position in both Iraq and Syria is waning.

By the time Trump gets into office in January, IS will probably represent a negligible threat in Iraq. And there will be no need for American intervention in Syria if, as anticipated, Trump signals a willingness to let Bashar al-Assad and Putin finish the job of pulverizing the opposition. So, ironically, it is likely that Trump will maintain Obama’s policy of “no boots on the ground” in Syria, although in reality American forces are already there, assuming a variety of advisory and training functions.

Still, the abiding question is what the U.S. will do after IS disintegrates as a coherent fighting force in Iraq and Syria. American Special Forces are now operating in Libya, where IS has a powerful affiliate. That may become the next large-scale venue for American operations in the vortex of the Middle East.
But it is just as possible that Trump will tell the Europeans that Libya is their problem, not America’s, and they should invade the country to stop the flow of both migrants and terrorists into Europe.

Unlike Obama, however, there will be no JV comments about IS coming from Trump.

Trump, of course, has spoken admiringly of Putin. His views of the Russian leader are more reminiscent of George Bush’s comment that he famously “looked Russian President Vladi­mir Putin in the eye and peered into his soul.”

So there is some superficial evidence that Trump and Putin can reach some rapprochement, a kind of reset. This view is further fueled by Trump’s avowed preference to treat every negotiation as “transactional” – pragmatically treating any foreign policy like a business deal.

So, in the short term, Trump’s election boosts Putin’s ambitions to regenerate Russia as a global power. Nonetheless, a shrinking economy,
declining military spending, a host of domestic problems and no sign of a major rise in oil and gas prices to bring Putin more revenues will limit Russia’s options.

But then again, if personality plays a role when it comes to foreign policy, then there are grounds for concern that Trump’s and Putin’s honeymoon won’t last long. The president-elect likes to play second fiddle to no one. The same is true for Putin.

So a clash could eventually ensue. There is now an arc that spreads from the Arctic down to the Black Sea that constitutes a zone of potential conflict. And there has already been a small movement of NATO’s troops into the Baltics and Poland.

Trump may make greater demands of NATO. But troop deployment won’t change in the short term. So their presence may eventually reinforce hostilities once the honeymoon is over.

Trump is unpopular to an unprecedented degree in Europe. Only 15 percent of the public expressed confidence in his leadership, in contrast to the 85 percent that said the same about Obama.

That said, the one thing that Obama, Clinton and Trump all have agreed on – albeit using different language – is that European countries should pay more toward the cost of their own defense. Last year, only five of NATO’s 28 members fulfilled their commitment to pay the two percent of GNP for defense. It is the United States that pays 73 percent of NATO’s defense.

But now a new reality is taking shape. Poll after poll reveals that Americans may like NATO but many are tired of paying for Europe’s defense.

Expect Trump to reinforce Obama’s warning, even as Trump’s prior comments about Japan and South Korea paying for their own defense suggest that the U.S. might militarily “re-pivot” to Europe and the Middle East, in contrast to Obama’s focus on Asia.

Speaking of which, every American president since Richard Nixon has tried a combination of three strategies when it comes to the China.

First, engage the Chinese diplomatically, mostly to draw them away from Russia. Second, do all that the U.S. can to encourage the growth of a large Chinese middle class in the hope that they will demand democratic reforms. And third, constrain China’s growth as a regional military power by locating forces in Asia and reinforcing alliances with other Asian powers.

Obama did all three. Trump will likely represent a notable contrast.

Contrary to what he has said about Russia, Trump has sounded an avowedly confrontational tone about China. He has called it a currency manipulator and discussed introducing new trade barriers against Chinese imports.

It is easy to dismiss some of this as electoral hyperbole. But, in the absence of a track record, we have to believe what he says. And the early responses from China are not comforting, despite Xi Jingping’s conciliatory expression of congratulations.

Obama had championed the proposed Trans-Pacific Partnership free trade agreement that does not include China as a means to deal with China’s rising power. But the TPP is extremely unpopular at home, and that deal is now probably dead in the water.

So the policy toward Asia will likely tilt from a military presence coupled with multilateral economic engagement to a bilateral focus on trade and finance between the U.S. and China. Still, Trump will need China’s help in dealing with a bellicose North Korea to avoid war on the Korean peninsula.

Since 2008, many Americans have abandoned the notion that globalization benefits the U.S. They think it is the source of job insecurity, not the solution to it.

Even the Democrats recognized this problem. Clinton was forced to incorporate Bernie Sanders’ criticism of free trade into her electoral platform.

Trump was far more hostile, criticizing NAFTA and any possible trade agreements that did not explicitly put America’s interests first. So, while he might try to renegotiate existing agreements, the proposed new ones are all off the table for now.

Clinton made it undiplomatically clear that there is no saving those mining jobs in Appalachia. Her vision of a 21st-century American economy is built on technology, finance and a few high-value added manufacturing jobs – and that requires free access to global markets. Trump’s vision is of a 19th-century economy, with revitalized production of steel and fossil fuels to appeal to his electoral base. That will be hard to pull off. So it is no surprise that he immediately announced a new infrastructure program to create new jobs for those former miners.

Finally, the black swan challenge from the Arctic

Foreign policy is always full of “unforeseen” problems that are often described as “black swans.”

My best guess is that Trump’s will be the Arctic. The accelerating effects of climate change are creating a series of challenges that the new president will have to face, even if he thinks it is a hoax.

These include Russian claims of sovereignty as it builds up its military forces, new waves of environmental refugees as its waters rise and questions about access in keeping the new waterways open for global shipping, energy and even tourism. America has no long-term plan to deal with these issues.

New presidents quickly discover that being the most powerful figure in the world does not mean that your orders will be carried out as you wish, that others respond as you expect or that you can achieve your policy outcomes. The environment is far more complex. New actors, new threats and new forms of warfare pose significant challenges for any American president. Even the largest military does not ensure an effective foreign policy.

Having a president with no foreign policy experience isn’t helpful in that environment. America and the world are inevitably in for a rocky ride – at odds with the simple solutions espoused by politicians on the campaign trail.

Simon Reich, Professor in The Division of Global Affairs and The Department of Political Science, Rutgers University Newark 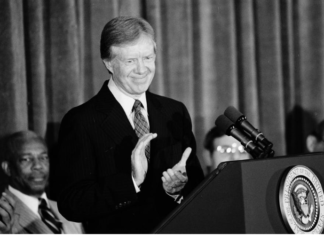