In the wake of Donald Trump’s unexpected victory, many questions have been raised about Facebook’s role in the promotion of inaccurate and highly partisan information during the presidential race and whether this fake news influenced the election’s outcome.

A few have downplayed Facebook’s impact, including CEO Mark Zuckerberg, who said that it is “extremely unlikely” that fake news could have swayed the election. But questions about the social network’s political significance merit more than passing attention.

Do Facebook’s filtering algorithms explain why so many liberals had misplaced confidence in a Clinton victory (echoing the error made by Romney supporters in 2012)? And is the fake news being circulated on Facebook the reason that so many Trump supporters have endorsed demonstrably false statements made by their candidate?

The popular claim that “filter bubbles” are why fake news thrives on Facebook is almost certainly wrong. If the network is encouraging people to believe untruths – and that’s a big if – the problem more likely lies in how the platform interacts with basic human social tendencies. That’s far more difficult to change.

Facebook’s role in the dissemination of political news is undeniable. In May 2016, 44 percent of Americans said they got news from the social media site. And the prevalence of misinformation disseminated through Facebook is undeniable.

It’s plausible, then, that the amount of fake news on a platform where so many people get their news can help explain why so many Americans are misinformed about politics.

But it’s hard to say how likely this is. I began studying the internet’s role in promoting false beliefs during the 2008 election, turning my attention to social media in 2012. In ongoing research, I’ve found little consistent evidence that social media use promoted acceptance of false claims about the candidates, despite the prevalence of many untruths. Instead, it appears that in 2012, as in 2008, email continued to be a uniquely powerful conduit for lies and conspiracy theories. Social media had no reliably detectable effect on people’s beliefs.

For a moment, however, let’s suppose that 2016 was different from 2012 and 2008. (The election was certainly unique in many other regards.)

If Facebook is promoting a platform in which citizens are less able to discern truth from fiction, it would constitute a serious threat to American democracy. But naming the problem isn’t enough. To fight the flow of misinformation through social media, it’s important to understand why it happens.

Facebook wants its users to be engaged, not overwhelmed, so it employs proprietary software that filters users’ news feeds and chooses the content that will appear. The risk lies in how this tailoring is done.

There’s ample evidence that people are drawn to news that affirms their political viewpoint. Facebook’s software learns from users’ past actions; it tries to guess which stories they are likely to click or share in the future. Taken to its extreme, this produces a filter bubble, in which users are exposed only to content that reaffirms their biases. The risk, then, is that filter bubbles promote misperceptions by hiding the truth.

The appeal of this explanation is obvious. It’s easy to understand, so maybe it’ll be easy to fix. Get rid of personalized news feeds, and filter bubbles are no more.

The problem with the filter bubble metaphor is that it assumes people are perfectly insulated from other perspectives. In fact, numerous studies have shown that individuals’ media diets almost always include information and sources that challenge their political attitudes. And a study of Facebook user data found that encounters with cross-cutting information is widespread. In other words, holding false beliefs is unlikely to be explained by people’s lack of contact with more accurate news.

Instead, people’s preexisting political identities profoundly shape their beliefs. So even when faced with the same information, whether it’s a news article or a fact check, people with different political orientations often extract dramatically different meaning.

A thought experiment may help: If you were a Clinton supporter, were you aware that the highly respected prediction site FiveThirtyEight gave Clinton only a 71 percent chance of winning? Those odds are better than a coin flip, but far from a sure thing. I suspect that many Democrats were shocked despite seeing this uncomfortable evidence. Indeed, many had been critical of this projection in the days before the election.

If you voted for Trump, have you ever encountered evidence disputing Trump’s assertion that voter fraud is commonplace in the U.S.? Fact checkers and news organizations have covered this issue extensively, offering robust evidence that the claim is untrue. However a Trump supporter might be unmoved: In a September 2016 poll, 90 percent of Trump supporters said they didn’t trust fact checkers.

If isolation from the truth really is the main source of inaccurate information, the solution would be obvious: Make the truth more visible.

Unfortunately, the answer isn’t that simple. Which brings us back to the question of Facebook: Are there other aspects of the service that might distort users’ beliefs?

It will be some time before researchers can answer this question confidently, but as someone who has studied how the various ways that other internet technologies can lead people to believe false information, I’m prepared to offer a few educated guesses.

There are two things that we already know about Facebook that could encourage the spread of false information.

First, emotions are contagious, and they can spread on Facebook. One large-scale study has shown that small changes in Facebook users’ news feeds can shape the emotions they express in later posts. In that study, the emotional changes were small, but so were the changes in the news feed that caused them. Just imagine how Facebook users respond to widespread accusations of candidates’ corruption, criminal activity and lies. It isn’t surprising that nearly half (49 percent) of all users described political discussion on social media as “angry.”

When it comes to politics, anger is a powerful emotion. It’s been shown to make people more willing to accept partisan falsehoods and more likely to post and share political information, presumably including fake news articles that reinforce their beliefs. If Facebook use makes partisans angry while also exposing them to partisan falsehoods, ensuring the presence of accurate information may not matter much. Republican or Democrat, angry people put their trust in information that makes their side look good.

Second, Facebook seems to reinforce people’s political identity – furthering an already large partisan divide. While Facebook doesn’t shield people from information they disagree with, it certainly makes it easier to find like-minded others. Our social networks tend to include many people who share our values and beliefs. And this may be another way that Facebook is reinforcing politically motivated falsehoods. Beliefs often serve a social function, helping people to define who they are and how they fit in the world. The easier it is for people to see themselves in political terms, the more attached they are to the beliefs that affirm that identity.

These two factors – the way that anger can spread over Facebook’s social networks, and how those networks can make individuals’ political identity more central to who they are – likely explain Facebook users’ inaccurate beliefs more effectively than the so-called filter bubble.

If this is true, then we have a serious challenge ahead of us. Facebook will likely be convinced to change its filtering algorithm to prioritize more accurate information. Google has already undertaken a similar endeavor. And recent reports suggest that Facebook may be taking the problem more seriously than Zuckerberg’s comments suggest.

But this does nothing to address the underlying forces that propagate and reinforce false information: emotions and the people in your social networks. Nor is it obvious that these characteristics of Facebook can or should be “corrected.” A social network devoid of emotion seems like a contradiction, and policing who individuals interact with is not something that our society should embrace.

It may be that Facebook shares some of the blame for some of the lies that circulated this election year – and that they altered the course of the election.

If true, the challenge will be to figure out what we can do about it. 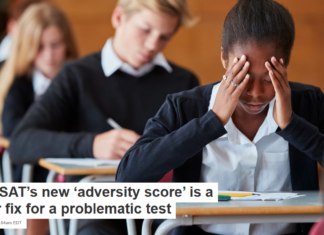 Staff Writer - May 22, 2019
Leigh Patel, University of Pittsburgh The College Board recently revealed a new “adversity score” that it plans to use as part of the SAT in...

Whether up in smoke or down the toilet, missing presidential records...