The revived trade agreement, now known as the Comprehensive and Progressive Agreement for Trans-Pacific Partnership (CPTPP), has finally made it across the line. It’s a considerable win for Australian farmers and service providers, in a trading area worth about A$90 billion.

The 11 remaining countries from the initial Trans-Pacific Partnership agreement finally agreed to go ahead with the deal without the US, at the annual meeting of the World Economic Forum in Davos, Switzerland.

The deal reduces the scope for controversial investor-state dispute settlements, where foreign investors can bypass national courts and sue governments for compensation for harming their investments. It introduces stronger safeguards to protect the governments’ right to regulate in the public interest and prevent unwarranted claims.


Despite earlier union fears of the impact for Australian workers, the CPTPP does not regulate the movement of workers. It only has minor changes to domestic labour rights and practices.

The new agreement is more of an umbrella framework for separate yet coordinated bilateral deals. In fact, Australia’s Trade Minister Steven Ciobo said:

The agreement will deliver 18 new free trade agreements between the CPTPP parties. For Australia that means new trade agreements with Canada and Mexico and greater market access to Japan, Chile, Singapore, Malaysia, Vietnam and Brunei.

It means a speedier process for reducing import barriers on key Australian products, such as beef, lamb, seafood, cheese, wine and cotton wool.

Read more:
The Trans-Pacific Partnership is back: experts respond


Australia now also has new bilateral trade deals with Canada and Mexico as part and parcel of the new agreement. This could be worth a lot to the Australian economy if it were to fill commercial gaps created by potential trade battles within North America and between the US and China.

What’s in and out of the new agreement

The new CPTPP rose from the ashes of the old agreement because of the inclusion of a list of 20 suspended provisions on matters that were of interest for the US. These would be revived in the event of a US comeback.

These suspended provisions involved substantial changes in areas like investment, public procurement, intellectual property rights and transparency. With the freezing of further copyright restrictions and the provisions on investor-state dispute settlements, these suspensions appear to re-balance the agreement in favour of Australian governments and consumers.

In fact, the scope of investor-state dispute settlements are narrower in the CPTPP, because foreign private companies who enter into an investment contract with the Australian government will not be able to use it if there is a dispute about that contract. The broader safeguards in the agreement make sure that the Australian government cannot be sued for measures related to public education, health and other social services.


The one part of the agreement relating to the temporary entry for business people is rather limited in scope and does not have the potential to impact on low-skilled or struggling categories of Australian workers. In fact, it only commits Australia to providing temporary entry (from three months, up to two years) of only five generic categories of CPTPP workers. These include occupations like installers and servicers, intra-corporate transferees, independent executives, and contractual service suppliers.

The above categories squarely match the shortages in the Australian labour market, according to the Lists of Eligible Skilled Occupation of the Home Affairs Department.

Bits of the original agreement are still included in the CPTPP such as tariffs schedules that slash custom duties on 95% of trade in goods. But this was the easy part of the deal.

Before the deal is signed

The new agreement will be formally signed in Chile on March 8 2018, and will enter into force as soon as at least six members ratify it. This will probably happen later in the year or in early 2019.

The geopolitical symbolism of this timing is poignant. The CPTPP is coming out just as Donald Trump raises the temperature in the China trade battle by introducing new tariffs. It also runs alongside China’s attempts to finalise a much bigger regional trade agreement, the 16-nation Regional Comprehensive Economic Partnership.

Even though substantially the CPTPP is only a TPP-lite at best, it still puts considerable pressure on the US to come out of Trump’s protectionist corner.

It spells out the geopolitical consequences of the US trade policy switch, namely that the Asia Pacific countries are willing to either form a more independent bloc or align more closely with Chinese interests.

Will this be enough to convince the Trump administration to reverse its course on global trade? At present, this seems highly unlikely. To bet on the second marriage of the US with transpacific multilateral trade would be a triumph of hope over experience. 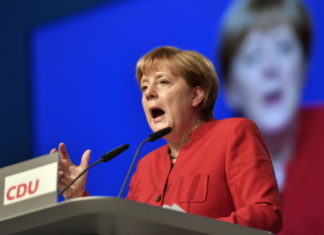 Staff Writer - December 8, 2016
Johanna Schuster-Craig, Michigan State University After the election of Donald Trump, commentators have argued that German Chancellor Angela Merkel may become the leader of the...