The latest G-7 summit, held June 8 to 9 in Quebec, is one of the most contentious in years.

Donald Trump and his counterparts from six other industrialized countries have been at loggerheads over the president’s aggressive but unstable trade policy. Trump’s renunciation of the Iran nuclear deal, his efforts to renegotiate NAFTA and his intransigent stance on climate change are not helping matters. Nor is his lastest proposal to readmit Russia to the gathering.

But the ink on the G-7 communique won’t be dry before Trump darts to Singapore to meet with North Korean leader Kim Jong Un for nuclear talks, another example of his unpredictable decision-making style. One moment he’s threatening war with the dictator, and the next he’s buttering him up for a summit.

I have written a number of times about the economic dangers of the Trump administration’s tilt toward protectionism. And I have pointed to the risk that Trump’s use of trade policy as a unilateral weapon could undermine the rule-based international order.

I remain worried about these issues, but what has struck me much more deeply in recent days is the seeming inconsistency, indeed instability, of Trump’s behavior on trade. It is worth considering its causes and consequences – which extend far beyond trade to his nuclear game of chess with North Korea and Iran.

At the G7, Trump’s belligerent and unpredictable trade policy is the main reason the other leaders – which also include German’s Angela Merkel, the U.K.‘s Theresa May and France’s Emmanuel Macron – are so perturbed. Some commentators are even beginning to term the meeting a “G6 plus one” to signify Trump’s estrangement from his allies.

Recent events have inflamed tensions significantly. The White House said on May 31 that it would impose steel and aluminum tariffs on the European Union, Canada and Mexico. The three had previously received exemptions from the new tariffs, first imposed in March and justified with a little-used national security provision.

All are now planning retaliatory tariffs against the United States, along with legal action at the World Trade Organization.

It’s the same story with China, which Trump has not only made subject to the same metals tariffs but has also threatened with US$50 billion of other sanctions if it doesn’t meet a series of demands.

Commerce Secretary Wilbur Ross recently traveled to Beijing hoping to negotiate increased Chinese purchases of American goods and a reduction of its trade deficit with the U.S. He was forced to return empty-handed after the Chinese government declared itself unwilling to act without an American promise to drop its tariff threats. An earlier leak that China would purchase an additional $200 million of U.S. exports turned out to be wildly optimistic.

The United States now finds itself isolated, not only from China but from its strongest allies as well. Is this a temporary step in negotiations, or is it the new normal?

Of course, Trump’s proclivity for changing his mind is well-known, but all the same there is an understandable tendency among commentators to focus on the content of his policy choices.

This is especially true on trade, where Trump’s protectionist rhetoric has been exuberant, to say the least.

And it is true that Trump’s actions have been more anti-trade than those of his predecessors, beginning with his withdrawal from the Trans-Pacific Partnership during the first week of his presidency.

Nevertheless, over the last few months, Trump’s trade policy has seemed increasingly erratic. He publicly discussed reentering the Pacific trade deal and just as quickly dismissed the idea. He imposed metal tariffs, immediately granted exemptions to most of America’s major exporters and then withdrew those exemptions three months later. He threatened China with new tariffs on $150 billion worth of exports, then suspended them and risked political capital to save the Chinese corporation ZTE. And after pushing for extraordinary trade concessions from China, he had to take a U-turn after it denied that it had agreed to the most important of those demands.

There are two schools of thought about what is driving this policy instability.

Supporters of the president tend to see it as a negotiating tactic, the “Art of the Deal” on a grander scale. Trump, they believe, is trying to throw world leaders off-balance so that he can extract more trade concessions from them.

Trump’s detractors, by contrast, see the president as hopelessly adrift, swayed this way and that by the varying opinions of his advisers. When globalists such as Steve Mnuchin and Wilbur Ross, secretaries of the treasury and commerce, respectively, have his ear, the president softens his stance on trade. But when U.S. Trade Representative Robert Lighthizer and White House adviser Peter Navarro, economic nationalists both, are in the room, Trump doubles down on protection.

If U.S. observers accept that Trump’s shifting policy is part of a broader negotiating strategy, Americans can perhaps hope for a better outcome than what they see now.

Indeed, there is some basis in game theory for “irrational” behavior as a negotiating technique. Nobel laureate Thomas Schelling, in his 1960 classic “The Strategy of Conflict,” pointed out that negotiators with a reputation for overreacting when their demands aren’t met can be in a stronger position to extract concessions.

If a country can convince its opponent of its willingness to follow through on threats even when they are self-destructive, the country can more effectively compel changes in behavior. Moreover, if an opponent doubts the ability of a country’s leaders to understand or carefully consider the consequences of the opponent’s threats, the country is, ironically, in a stronger negotiating position. This “irrationality” approach was famously termed the “madman strategy” by Richard Nixon and played a role in motivating his escalation of the Vietnam War during the Paris negotiations.

Perhaps, then, Americans are witnessing the early stages of a negotiating strategy that will ultimately bear fruit.

Even in this optimistic scenario, however, the president’s approach seems too myopic.

After all, international trade negotiations do not play by the same rules as military diplomacy, where much of this theory was developed. Such techniques might have a greater change of working with Iran and North Korea, but of course the risks of escalation here are even more severe.

Trade is different because it is mutually beneficial and also because it requires cooperation that is sustained over time. A country’s reputation for stable compliance with its agreements is thus put at a premium; otherwise the country risks being shunned by potential partners. To wrest trade concessions from America’s partners may be satisfying, but if it is accomplished at the cost of weakening the world trading system, it is hardly worth the price.

The costs of instability

If, on the other hand, Trump’s unstable policy is a symptom of indecision in the face of the competing agendas of his aides, the world economy may be in for a bumpy ride. Irrational behavior can be used selectively as a negotiating technique but has a high cost if not applied carefully and strategically. If a country’s negotiating partners doubt its willingness or ability to follow through on its promises, cooperation becomes impossible.

In the final analysis, a stable and rule-based trading system is in the United States’ long-term interest. Inconsistent and aggressive trade policies, whether produced by a master negotiator or a malleable amateur, risk poisoning the mutual trust necessary to make such a system function.

Some are now saying that President Trump is in the early stages of reconsidering America’s membership in the WTO. Hopefully the president will come to understand what is at stake soon, before it is too late. 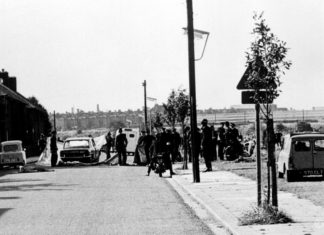 Staff Writer - October 25, 2014
By Yvonne Jewkes, University of Leicester The news that Harry Roberts is to be released from prison – potentially within days – has been greeted...

Here’s how much your personal information is worth to cybercriminals –...