Emperor penguins are truly remarkable birds – they thrive in the coldest environment on Earth and live year-round on the ice. Breeding colonies congregate on sea ice during the Antarctic winter and must withstand temperatures that regularly drop below -30C.

In fact, emperor penguins are so adapted to cold conditions that they become heat stressed when temperatures climb above 0C. Emperor penguins are therefore particularly threatened by climate change, and their numbers are expected to decline in the coming decades.

However a new study, published today in Global Change Biology, shows that it was once too cold even for emperor penguins.

Penguins past and present

In the first continental-scale genetic study of emperor penguins, we examined genetic diversity of penguins modern and ancient to find out how they’re related. We collected genetic samples from eight breeding colonies – no easy feat given that emperor penguins live in some of the remotest places on Earth in conditions that would send most people running for a roaring fire and a hot cup of tea.

Reaching the colonies involved weeks on the notoriously wild Southern Ocean (and considerable seasickness), helicopter journeys over pristine expanses of sea ice, and long snow shoe and ski traverses. The “A” (for Antarctic) factor was a constant presence, with delays caused by heavy sea ice that trapped ships for days at a time and blizzards that grounded helicopters.

Nevertheless, the effort paid off. Analyses of genetic data allowed us to reconstruct the population history of penguins, and correlate it with environmental conditions inferred from ice core data. The findings indicate that approximately 12,000 years ago, after the ice age ended and temperatures began to rise and sea ice around Antarctica decreased, emperor penguin numbers began to climb.

The emperor penguin’s relationship with sea ice can be described as a Goldilocks phenomenon.

The penguins need stable sea ice to stand on during their breeding season. If the sea ice extent is too great then the journey between the colony and their feeding grounds in the ocean may prove too costly in terms of energy reserves.

If there is too little sea ice or if the sea ice is not stable enough, then the penguins cannot establish successful breeding colonies. The duration of the sea ice season is also important – if the season is too short for the chicks to adequately mature, then they may not have time to grow their adult, waterproof feathers and will not survive at sea.

During the last ice age there was about twice as much ice as there is today. Emperor penguins were probably unable to breed in more than a few locations around Antarctica. The distances from the open ocean, where the penguins feed, to the stable sea ice where they breed was probably too great in most of their modern breeding locations.

The three populations that did manage to survive the ice age may have done so by breeding near polynyas – areas of ocean that are kept free of sea ice by wind and currents. One of the most important of these polynyas was located in the Ross Sea.

Because of this Goldilocks relationship emperor penguins are facing an uncertain future. Antarctic sea ice extent has been measured using satellites for the past 35 years. In this time, large changes with very different trends in different regions have been observed.

For the past three years in a row winter sea ice has broken records for total maximum extent. This overall increasing trend masks major regional changes in the extent of the sea ice field and the duration of the sea ice season.

In some areas, such as the Bellingshausen Sea, there has been a large decline in sea ice while in others, including the Ross Sea, sea ice is increasing. These fluctuations in sea ice are likely placing a huge strain on emperor penguin populations, which is set to continue into the future. As areas suitable for emperor penguin breeding become scarcer it is becoming increasingly important to conserve areas known to support penguin populations.

It’s clear that the Ross Sea was a critical area for emperor penguins in the past and this suggests it will provide an important refuge for breeding colonies in the future. This emphasises the need for careful protection of this vital part of the Antarctic ecosystem.

A marine protected area, to protect roughly 1.34 million square kilometres of the Ross Sea from commercial fishing, was proposed by New Zealand and the United States at the last meeting of the Commission for the Conservation of Antarctic Marine Living Resources in October 2014. The proposal was rejected, but a Ross Sea marine park is likely to be on the agenda again at the 2015 meeting.

Emperor penguins are remarkably hardy birds, surviving in one of the harshest environments on earth. However their reliance on a narrow range of suitable habitat highlights their fragility, and raises concern over their future in a world undergoing its most rapid environmental change in history. 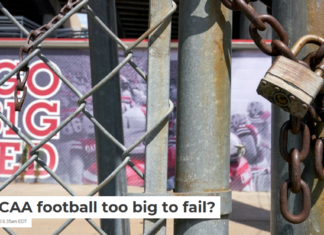 Staff Writer - August 24, 2020
David Ridpath, Ohio University The coronavirus continues to jeopardize college sports. The NCAA men’s and women’s basketball tournaments were canceled back in the spring. In early...

Bitter coffee today? Try changing the colour of your cup