Westminster’s energy strategy to “keep the lights on” by relying on new nuclear build is looking increasingly like a recipe for economic ruin and political disarray. George Osborne, the chancellor, confirmed in this week’s Autumn Statement a co-operation agreement with a Franco-Japanese consortium to build a new plant at Moorfield in Cumbria as part of his national infrastructure plan.

There is already such an agreement in place for another plant at Wylfa Newydd in Wales, and of course a full deal agreed with the Franco-Chinese project to build Hinkley Point C in Somerset – the first new station in the UK in a generation. Yet that latter project’s huge estimated cost increase illustrates exactly what is wrong with nuclear – and why global sentiment has swung against it as the real costs become clearer.

Westminster’s claim that Hinkley Point C would cost £16 billion has been countered by experts at the EU who have placed the cost at nearer £25 billion (and note the original estimate was £10 billion). The deal involves paying twice the current price for electricity, with UK taxpayers and electricity consumers locked into a binding contract for an extraordinary 35 years.

The European Commission raised concerns that Westminster had breached state aid rules in the subsidies being offered to finance the project. Energy secretary Ed Davey’s huge sigh of relief in October, when the EC controversially gave the green light for the project, may be premature: it will be challenged by the Austrian government in the EU courts.

Even if these obstacles can be surmounted, the financial risks to these kinds of projects are simply huge. Severe delays to new-build stations at Olkiluoto in Finland and Flamanville in France demonstrate a systemic problem. The Level-7 nuclear incidents at Fukushima and Chernobyl are evidence of the safety issues that are forever present – and then there is the insoluble problem of nuclear waste and the astronomical eventual decommissioning costs.

According to government figures, the waste problem at Sellafield alone hit nearly £68 billion — and that was almost two years ago. Little wonder that there is both local opposition to Hinkley Point and a fair amount of concern about nuclear power across the British public.

Areva’s failing financial performance must also be of significant concern to the project. Its share price plummeted on November 19 and is yet to recover amid a slew of profit warnings and multi-billion-euro debts.

To blame for the company’s predicament are its exposure to the French and Finnish nuclear projects, Japan’s reluctance to resume its nuclear programme and reticence in other countries, not least Germany. If this leads to a restructuring at the company, it brings into question the future of Hinkley Point. While the project is being led by EDF, Areva is providing its European Pressurised Reactor technology and has a 10% equity stake in it. Without the company’s injection of billions of pounds and its technological know-how, the project has to be in jeopardy.

Whose projects should they be anyway?

Another issue is who should provide these projects. With Areva and EDF both under French state control, critics have said that the project amounts to the UK treasury writing a “blank cheque” to the French government. The same could be said of China General Nuclear Corporation and China National Nuclear Corporation, who came onboard last year.

EDF is also reputedly planning to hand over an additional and significant financial stake in Hinkley Point to other foreign corporations. Saudi Electric is reportedly in talks, while the Qataris have confirmed an interest too. British involvement in the project has been non-existent since the UK’s Centrica left a cavernous hole in the project by ceasing involvement in early 2013. Should de facto control of such an important element of our national electricity security be placed in the hands of foreign corporations?

Taken together, these sets of very deep concerns mean that nuclear can only be an option of last resort. To the astonishment of many, the Telegraph recently reported that the former UK chief scientist and nuclear “salesman”, has arrived at the same conclusion.

Given this analysis, the Scottish government would appear more than justified in using its extensive planning powers to reject new nuclear build. In light this and the fragility of future fracking prospects, Westminster would be wise to rethink its national energy policy and give more and not less support to onshore and offshore wind and other marine renewables.

To get an alternative viewpoint on nuclear power, now read this piece. 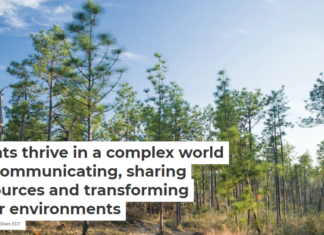 Plants thrive in a complex world by communicating, sharing resources and...

Why some women are traveling to South Korea to find boyfriends