When Christopher Nolan’s latest sci-fi film Tenet opened in late summer, the hope was that audiences would return to the velvet seats and the waft of popcorn would engulf cinemas once more. Exhibitors everywhere had invested considerable resources to make their cinemas as safe as the other places of leisure and culture that were reopening.

Tenet succeeded globally, but underperformed in the US. Of the US$307 million taken at the box office by early October 2020, only US$45 million is from the historically lucrative US market. Over 85% has come from outside the US. The proportion of international non-US box office revenues has been rising for years, but 70% to 75% might have been more in line with studio expectations.

As studios scramble to make sense of the figures and adjust their film release schedules accordingly, one thing has become evident to exhibitors worldwide: Hollywood is focusing essentially on, well … Hollywood.

With theatres in Los Angeles (and New York) still closed due to the pandemic, studios are cutting their losses, grabbing their movies, and running for the hills to wait out the COVID-19 floods. The likes of Wonder Woman 1984, the Candyman and Dune remakes and new James Bond movie No Time to Die are all postponed, while others like Mulan bypassed cinemas to debut on streaming services instead.

Exhibitors point out that although US cinemas remain closed or underperforming, cinema is showing clear signs of life elsewhere. The strength of feeling amongst exhibitors on the lack of product was recently distilled by an unnamed UK cinema operator, who said, “It’s a fuck you to exhibitors”.

In the latest episode of the unfolding drama, Cineworld, the world’s second largest cinema chain, has responded by closing all of its UK and US cinemas for the foreseeable future. In the words of CEO Mooky Greidinger: “We are like a grocery shop with no food. We had to take this decision.”

It is perfectly understandable for studios to wish to protect their investment – blockbusters cost huge amounts of money. But Hollywood might wish to revisit its history to fully comprehend the threat. A quick revisit to the events surrounding the Spanish flu is particularly significant here.

It was 1918. The long, bloody war was coming to an end. The light at the end of tunnel flickered promisingly. But just as the world quickened its pace towards that inviting glimmer, a huge gaping hole opened under its feet.

A deadly pandemic – H1N1 – took hold with speed and ferocity. Its more “friendly” name, Spanish flu, belied the fact that this virus would infect 500 million people (roughly one-third of the world’s population) and over 50 million would die.

Prior to the first world war, Hollywood had been growing as a centre for film production. But it was one of many national film industries, with strong competition from large European companies like Pathé and Gaumont.

Europe’s production and cinema infrastructure had been destroyed by the war, and the pandemic now prevented it from rebuilding. In the meantime, US entrepreneurs like William Fox and Jesse L Lasky, respective founders of the Fox and Paramount studios, were able to fill the void by developing an infrastructure in America that bet heavily on bigger picture theatres, state-of-the-art equipment and, crucially, feature films.

Heavily inspired by the multi-department production-line ethos of the Ford Motor Company, they started making lavish features such as Way Down East (1920), The Four Horsemen of the Apocalypse (1921) and The Ten Commandments (1923).

California overtook New York as the centre of this new industry, partly because the east coast had been harder hit by the pandemic, and soon it was creating stars such as Charlie Chaplin in The Kid (1921). Europe couldn’t respond – recalling Tony Curtis/Sidney Falco’s great line in Sweet Smell of Success, “Watch me run the 100-yard dash with my legs cut off”.

When sound production became possible later in the decade, the Americans were far better placed to invest heavily to cement their dominance – a position they have not relinquished since.

Fast forward a century, and the 2020 pandemic is in danger of ending Hollywood dominance. International box office has become more important in recent years principally because of China, which has become a huge cinema consumer in a very short space of time, while other markets like Indonesia, Saudi Arabia and Nigeria have grown quickly too. In three decades, non-US revenues have risen from about a third to an all-time high of 73% last year.

This situation is not unknown to studios and filmmakers in Hollywood, of course. Yet they seem unable or unwilling to fully appreciate the risk they are running now, namely that to vacate global cinemas is to create a void that could be their “1918 moment of reckoning”.

We have already seen that Chinese war movie The Eight Hundred has become the smash of the year in its home country. Also notably, Cineworld hasn’t closed its cinemas in eastern Europe and Israel because it thinks there is enough good local fare to attract audiences. The danger is that audiences in these markets develop more of a taste for local product and never return to Hollywood films to the same extent.

Elsewhere, there is a risk that cinema chains will not return to business as usual. How many of Cineworld’s 45,000 staff will be available when it’s time to open? And how long will shareholders tolerate temporary closure?

Starving cinemas responsible for 73% of Hollywood revenues just because the other 27% is currently not functioning well is not a logical strategy. As a recent UK newspaper article put it, “Bond is putting a bullet in his own head”.

The takeaway is brutally simple: bring that food to the grocery shelves, or you might just find they won’t be there by the time you come back. 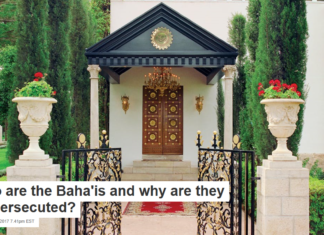 Staff Writer - December 3, 2017
Zackery M. Heern, Idaho State University The Baha'is are among the most persecuted religious minorities in the world. In Iran, where the religion was founded, universities...