Horizon Gymnastics’ home facility is located in Port Charlotte, Florida — a central location between Sarasota and Fort Myers, surrounded by the cities and towns of Venice, Englewood, Boca Grande, North Port, and Punta Gorda. The facility first opened its doors in 1984 and has been developing well-rounded and winning athletes ever since. They offer classes in gymnastics, competitive teams, acro gymnastics, trampoline and tumbling, and an immersive summer camp program.

Coach Shelly Proa, owner of Horizon Gymnastics, had her start at Horizon Gymnastics alongside her sister in the mid 80’s. During her award interview, Shelly told Life & News “June 6th marks our 38th year anniversary here at Horizon, we started off with the gym being half the size that it is. The first day we opened we had 50 students. We’ve grown to over 400 students and twice the size of facility.”

Coach Shelly’s mother opened Horizon in 1984 where Shelly and her sister both grew their talents and skills, competing from childhood through their college years. Now, Shelly’s daughter Addison competes alongside the next generation of Horizon gymnasts. “I’ve been doing gymnastics since I’ve been 18 months old… my experience at Horizon has been amazing. I wouldn’t ask for anything different. They’re family, friends and I love them. I get to travel. Coach Shelly, my Mom, inspires me so much to be a hard worker and she never gives up on anybody, especially her staff,” said Addison Proa.

Addison isn’t the only student who loves Coach Shelly and Horizon. Every student we spoke with was absolutely happy with their experience, learning, and opportunities at Horizon including seven year old Azaria Hart who said of the program, “I’ve been doing gymnastics at Horizon Gymnastics for five years. I started when I was two and now I’m seven. Coach Shelly is the best coach ever. Thank you for everything, Coach Shelly.”

“I’ve been coaching with Horizon for about four years now. I came here from Georgia and working under Shelly Proa has been an amazing experience. I have learned so much knowledge about gymnastics from lower level all the way up to level 10, and I continue to learn underneath her. I am just truly blessed to have her in my life and can’t wait for several more years of working together and creating several gymnasts,” stated Jessica, one of Horizon’s coaches.

“We send our two boys ages four and eight to Horizon Gymnastics for lessons and summer camp. Ever since they started going to Horizon, they’ve become more outgoing, confident, and better students in other areas of life. They’re also healthier and more vibrant throughout the day. All of the coaches care about their growth not only as gymnasts but also as whole human beings and that’s what we love most about Horizon,” said the parents of two boys who go to Horizon.

Life & News invites you to spend a moment watching its award interview with Shelly Proa and Horizon Gymnastics to learn more. 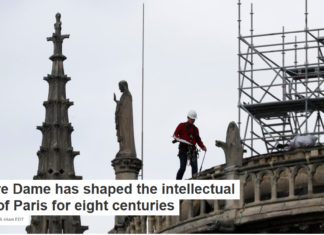 A philosopher explains why dance can help pandemic-proof your kids

Blind people have increased opportunities, but employers’ perceptions are still a...