By Luigi Zeni, The Second University of Naples

Landslides happen everywhere and in different geological locations. This can be because of flooding, which allows sodden soil to move, or rockfalls and slower, continuous movements of land due to gravity. Landslides are particularly dangerous when they happen without warning, as recently happened in India and Japan. Tens of thousands were killed in the Vargus disaster in Venezuela in 1999.

Some places are prone to flooding – even, in the case of India, monsoons – but to know where a landslide will happen or when it might happen we need good tools. Currently equipment to measure landslides includes rain gauges, such as those used in the Chittagong region of Bangladesh, which record levels of rainfall that can then be compared to previous data of levels that triggered a landslide.

But many current systems use point-based sensors, in other words systems that rely on ground plugged devices that are able to monitor only from fixed positions.

We’ve been working on a new way of measuring to predict landslides using optical fibres in cables as sensors. When installed, these sensors can permanently monitor changes happening to the land. The system, called Stimulated Brillouin Scattering, uses the interaction of light with acoustic waves. Basically, when the soil undergoes collapse or sliding, the embedded fibre stretches and we detect this.

These sensing optical fibre cables can be embedded in shallow trenches in the ground to monitor both large landslides and slow slope movements through the elongation induced in the sensing fibre. If you imagine the land as a body, a distribution of these optical fibre sensors act as the “nerve system”. They have the ability to detect a change of one centimetre over a distance of a kilometre. Being able to measure and track early pre-failure soil movements, it is then possible to detect the signs of an imminent landslide.

Unlike these conventional tools, optical fibres make measurements along the whole sensing cable which allows for a fully distributed measurement of land deformation. The advantage is the continuous monitoring of large areas with high accuracy. They can also be used in difficult-to-access places, for example underneath bridges, outside the walls of tunnels, near dams and along pipelines and railways in remote rural areas.

These sensors can also be used to cover very large areas (several square kilometres) with a single fibre cable and to pinpoint the location of failure signs. In traditional point-based systems you have to be lucky to place a sensor in the critical position where something happens otherwise you miss the event.

The optical fibres can also be controlled from a remote point, so fibres can be laid and left with no need for regular inspections, while the data is transmitted via wireless or optical fibre networks. They are also cheaper than traditional point sensors because a single fibre does the trick and no in-situ visits are required.

Optical fibres have been used to measure creep in road boundaries and to monitor bridges and pipelines. So far, only small-scale tests have been used with regard to landslides. But we believe they could change the way we measure and predict these deadly occurrences. 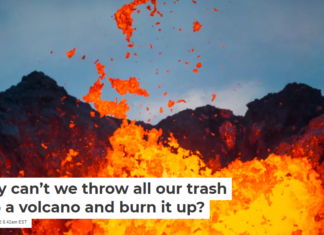 Why can’t we throw all our trash into a volcano and...

Staff Writer - January 8, 2022
Emily Johnson, US Geological Survey Curious Kids is a series for children of all ages. If you have a question you’d like an expert...