It is received wisdom that many shark attacks take place because the ocean predators “mistake” surfers for seals.

But this assumption does not recognise what quick and efficient predators they are. The fossil record tells us sharks have been evolving for at least 20 million years, and as a result are perfectly adapted for what they do. It is unlikely there is any creature on earth that hunts as well.

Shark attacks usually occur very quickly, and are all over in 15 seconds or less. They seem to rely on the element of surprise and shark experts are convinced “it is the shark that you don’t see that will get you”. I believe they also have an in-built radar, which “locks on” to their target.

This is my take on shark attacks …

I have learned about shark attacks from experience. On the morning I was attacked, surfing alone at the south end of Redgate beach in 2004, I was first approached by a juvenile seal, which was apparently trying to come as close to me as possible.

I had never observed this sort of animal behaviour before, and my first thought was to look and see what had chased it in behind me. I turned around to see a large grey fin turning and heading straight for us, accelerating fast and rising. That scene has played over and over in my mind ever since and will be etched in my memory forever.

It took a fraction of a second for my brain to process this threat, but once it did the fight or flight mechanism kicked in. I could see from its speed and size that I had no chance of fighting it, flight was my only option. I can only describe this response as a primitive defence mechanism that has probably been evolving in humans for millennia, just like the attack mechanism in sharks.

What happens is the brain tunes out, so that all that can be imagined is white static, like when the television loses the signal. Just before the brain drops out, it tells the body to release a massive amount of adrenalin to the muscles, so much so that I could feel the surge through my whole body, all the way to my finger tips as I made myself big, swung the board to the side and started paddling for my life.

This “brain fade” has a second purpose, in that it prevents you from being distracted from the only thing that matters … flight. I believe the seal was the target that day, not me, but I didn’t hang around to confirm that. I made it to the beach in one piece, but also in shock from the experience.

Can shark attacks be prevented with technology?

In previous articles on The Conversation, the use of physical barriers, such as shark nets or electrical barriers have been debated.

The problem is that these may not always deter a shark determined to attack its target prey. What the experts don’t seem to realise is we are dealing with a creature that has evolved over twenty million years to become a perfect predator, and nothing we can do will alter that fact.

The only predator to surpass this creature in terms of its ability to kill at will and without warning is Homo sapiens. Humans, though, can be prey as well as predator, and the same goes for sharks or any other top predator, as the tragic demise of apex species such as tigers attests.

So the question now becomes, are we comfortable with putting ourselves in the position of being potential prey for sharks when we venture out for a surf, dive or swim?

Most people will weigh up the risk and rationalise the chances of being attacked as so remote, and the rewards sufficient enough to justify the risk. But that decision is based on incomplete information.

What we need is a system to better inform the public of shark attack risk, free of irrelevant statistics or media hyperbole, so that awareness and vigilance are maintained into the future and avoidable deaths and associated trauma are minimised.

More often than not, locals know when there are shark sightings in the area, word gets around quickly amongst the surfing, fishing and diving community, but obviously not everyone is made aware of the risk.

In a recent case in southwest WA, only a few days before a fatal attack, surfers in the car park above Gas Bay watched in horror as a lone surfer was circled by a shark. The surfer did not see the shark, but was not attacked before he could be warned to come in (obviously not targeted by the shark). But the subsequent victim was the target and the danger was real and known, he may just not have been fully informed of the risk.

I believe we need a localised Shark Alert System for surfers, divers and swimmers that is web-based and self-monitoring, with a consistent signage and warning system activated when a dangerous shark is sighted.

How it would work

The web-based Shark Alert System could have social media functionality, including blogs and links to the mobile devices and social network pages that surfers, divers and swimmers increasingly use, including visitors from interstate and overseas.

Using social media, locals could self-regulate the system, through postings on the weather and surf forecast websites used by surfers and the timely placement and removal of warnings on social networks. Perhaps a group of responsible surfers, in collaboration with the relevant agencies and web service providers, could assume the role of monitoring and verifying shark alerts along the coast. I realise that there may be legal and duty of care issues, but if this is done on a voluntary basis, with the support of relevant agencies in the area, it could be a big improvement on the current situation, where a code of silence seems to surround shark sightings.

This could be eventually be a system that extends around Australia, once it has been refined in the known shark risk areas, such as southwest Australia.

A Shark Aware Program could also encourage surfers, divers and swimmers to:

Of course, I am one of many surfers who has had a close encounter with sharks and realise that the threat of shark attack will never be eliminated. But a Shark Alert System and Shark Aware Program could mitigate the risk of attack in the future, thereby saving lives and providing a sense of awareness and safety for locals and visitors that may not have heard of recent sightings in the area. 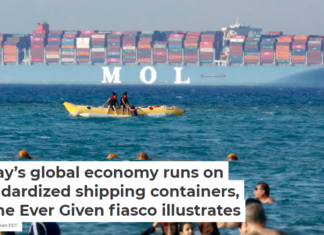 Staff Writer - April 5, 2021
Anna Nagurney, University of Massachusetts Amherst Take a look around you. Perhaps you’re snacking on a...