After about three decades of relatively low inflation, consumer prices are skyrocketing again.

The price of gasoline, for example, was up 40% in January 2022 from a year earlier, while used cars and trucks jumped 41%, according to data released on Feb. 10, 2022. Other categories experiencing high inflation include hotels, eggs, and fats and oils, up 24%, 13% and 11%, respectively. On average, prices climbed about 7.5%, the fastest pace of inflation since 1982.

It’s part of the mandated job of the U.S. Federal Reserve to prevent inflation from getting out of hand – and lowering it back to its preferred pace of about 2%.

To do that, the Fed has signaled it plans to raise interest rates several times this year – perhaps as many as five – beginning in March. And January’s faster-than-expected inflation figures suggest it may have to accelerate its overall timetable.

Will this work? If so, why?

I’m an economist who has been studying how monetary policy affects the economy for decades while working at the Federal Reserve, the International Monetary Fund and now the University of Southern California. I believe the answer to the first question is most likely yes – but it will come at a cost. Let me explain why.

The Federal Reserve controls the federal funds rate, often referred to as its target rate.

This is the interest rate that banks use to make overnight loans to each other. Banks borrow money – sometimes from each other – to make loans to consumers and businesses. So when the Fed raises its target rate, it raises the cost of borrowing for banks that need funds to lend out or meet their regulatory requirements.

Banks naturally pass on these higher costs to consumers and businesses. This means that if the Fed raises its federal funds rate by 25 basis points, or 0.25 percentage point, consumers and businesses will also have to pay more to borrow money – just how much more depends on many factors, including the maturity of the loan and how much profit the bank wants to make.

This higher cost of borrowing in turn dampens demand and economic activity. For example, if a car loan becomes more expensive, maybe you’ll decide now is not the right time to buy that new convertible or pickup truck you had your eye on. Or perhaps a business will become less likely to invest in a new factory – and hire additional workers – if the interest it would pay on a loan to finance it goes up.

This is the cost to the economy when the Fed raises interest rates.

To see an example of how this works, consider a used car dealership, where the pace of inflation has been exceptionally high throughout the pandemic. Let’s assume for the moment that the dealer has a fixed inventory of 100 cars on its lot. If the overall cost of buying one of those cars goes up – because the interest rate on the loan needed to finance one rises – then demand will drop as fewer consumers show up on the lot. In order to sell more cars, the dealer will likely have to cut prices to entice buyers.

In addition, the dealer faces higher borrowing costs, not to mention tighter profit margins after reducing prices, which means perhaps it couldn’t afford to hire all the workers it had planned to, or even has to lay off some employees. As a result, fewer people may be able to even afford the down payment, further reducing demand for cars.

Now imagine it’s not just one dealer seeing a drop in demand but an entire US$24 trillion economy. Even small increases in interest rates can have ripple effects that significantly slow down economic activity, limiting the ability of companies to raise prices.

The risks of raising rates too quickly

But our example assumes a fixed supply. As we’ve seen, the global economy has been dealing with massive supply chain disruptions and shortages. And these problems have driven up production costs in other parts of the world.

If high U.S. inflation stems mainly from these higher production costs and low inventories, then the Fed might have to raise interest rates by a great deal to contain inflation. And the higher and faster the Fed has to raise rates, the more harmful it will be to the economy.

In keeping with our car example, if the price of computer chips – a critical input in cars these days – is increasing sharply primarily because of new pandemic-related lockdowns in Asia, then carmakers will have to pass on these higher prices to consumers in the form of higher car prices, regardless of interest rates.

In this case, the Fed might then have to dramatically raise interest rates and reduce demand substantially to slow the pace of inflation. At this point, no one really knows how high interest rates might need to climb in order to get inflation back down to around 2%.

Updated to note impact of January inflation figures on Fed. 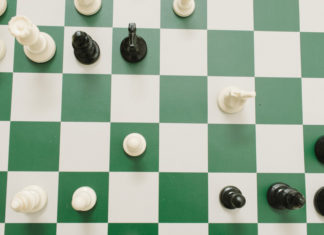 Staff Writer - October 11, 2014
By John Sharples, Lancaster University This October, the Planet Hollywood Casino in Las Vegas is hosting a chess tournament with the largest prize fund in...

The guts of an Apple iPhone show exactly what Trump gets...