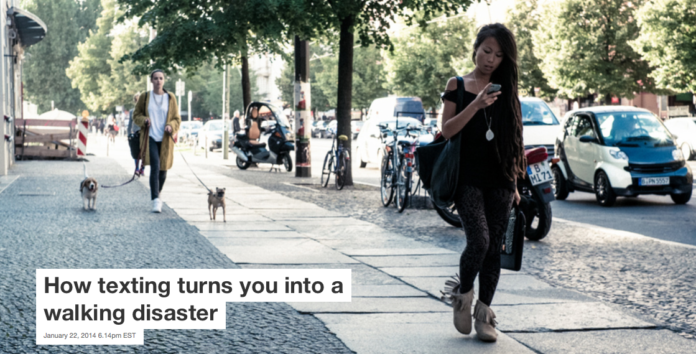 For most of us, walking in a straight line at reasonable speed is a simple task. But watch someone texting or reading on their mobile phone and you’d be forgiven for thinking that walking is not as easy as it looks.

People who text and walk (“wexting”) are not only a source of irritation to those of us stuck behind a slow, weaving wexter. Wexting may also put you at risk of injury and – according to our study published today in PLOS ONE – even changes your style of walking.

Wexting? Mind that fountain … or train …

The dangers of texting while driving are well known, but the impact of texting on walking is only beginning to gain attention.

Much of this interest has been generated by media reports of wexters who wander into fountains, onto train tracks, or recently in St Kilda, off a pier (and although the woman in question couldn’t swim, she did manage to hold onto her phone until rescued).

In addition, the number of pedestrians killed or injured in traffic is rising and texting while walking is bearing the brunt of the blame.

But, despite speculation that using a mobile phone while walking might be hazardous, few studies have examined the impact of mobile phone use on walking.

Our study used a 3D movement analysis system to examine how people walk while texting or reading on a mobile phone. We asked 26 healthy individuals (with an average age of 30 years), who used their mobile phone to text on a daily basis, to walk in a straight line in one of the following ways:

Participants used their natural texting style (one or two hands, portrait or landscape orientation, use of autocorrect or not) and eight cameras captured the speed, direction and movement of their bodies when walking under each condition.

We found texting and (to a lesser extent) reading on a mobile phone causes people to walk slower, deviate from a straight path and “lock” their head, trunk and arms together, so they move as a unit (in order to keep the phone steady in front of their eyes).

The problem with the robot-like walk

Research has shown that people who walk slower, who dual-task, and who walk with a more “locked” (robot-style) posture are at greater risk of collisions or falls.

In addition, people who deviate from a straight path while walking in a pedestrian environment are more likely to wander into traffic or onto train tracks, leaving them at greater risk of serious injury or death.

Previous studies have shown that individuals who text while crossing the street in a virtual pedestrian environment look away from the street more often – and are hit more often by motor vehicles – than those who are not using their mobile phone.

Surprisingly, 35% of our young, healthy participants reported a previous accident while texting on their mobile phone including falls, trips and collisions with obstacles or other people. It seems accidents while walking and texting are not uncommon – even among a generation that is highly skilled with mobile phones and believes itself to be adept at dual-tasking.

Ours is not the first study to show reduced speed and deviation from a straight line while texting and walking – the only other study in this area asked participants to wear a hood while walking that excluded their vision of the floor and destination.

But ours is the first to show changes in posture and walking when people text under natural circumstances with normal vision and the first to compare differences between typing and reading text.

Breaking our addiction to mobile phone technology, particularly that of texting, seems like a battle lost.

Perhaps by ensuring people are educated about how using a mobile phone to text (and, to a lesser extent, read) affects their ability to walk safely – particularly in high-risk environments such as near traffic, train tracks, water or even bears (see video below) – we can reduce wexting related accidents. 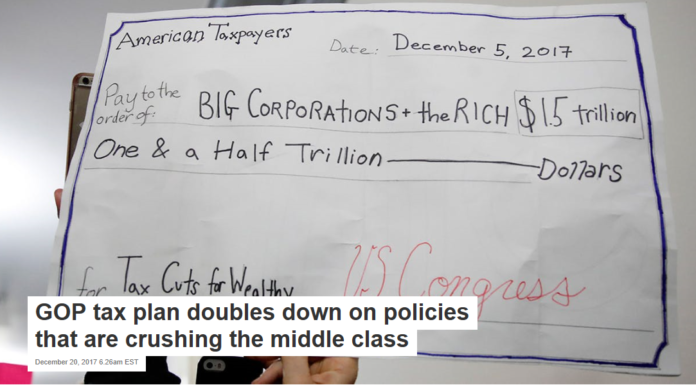 How a one-off tax on wealth could cover the economic cost of the coronavirus...