Since his inauguration, President Donald Trump has been waging war against the American press by dismissing unfavorable reports as “fake news” and calling the media “the enemy of the American people.”

As a countermeasure, The Washington Post has publicly fact-checked every claim that Trump has labeled as fake. In August, The Boston Globe coordinated editorials from newspapers across the nation to push back against Trump’s attacks on the press. The Associated Press characterized this effort as the declaration of a “war of words” against Trump.

News organizations might frame themselves as the besieged party in this “war.” But what if they’re as much to blame as the president in this back-and-forth? And what if readers are to blame as well?

In an unpublished manuscript titled “The War of Words,” the late rhetorical theorist and cultural critic Kenneth Burke cast the media as agents of political warfare. In 2012, we found this manuscript in Burke’s papers and, after working closely with Burke’s family and the University of California Press, it will be published in October 2018.

In “The War of Words,” Burke urges readers to recognize the role they also play in sustaining polarization. He points to how seemingly innocuous features in a news story can actually compromise values readers might hold, whether it’s debating the issues further, finding points of consensus, and, ideally, avoiding war.

A book born out of the Cold War

In 1939 – just before Adolf Hitler invaded Poland – Burke wrote an influential essay, “The Rhetoric of Hitler’s ‘Battle,’” in which he outlined how Hitler had weaponized language to foment antipathy, scapegoat Jews and unite Germans against a common enemy.

After World War II ended and America’s leaders turned their attention to the Soviet Union, Burke saw some parallels to Hitler in the way language was being weaponized in the U.S.

He worried that the U.S. might remain on a permanent wartime footing and that a drumbeat of oppositional rhetoric directed at the Soviet Union was making the nation susceptible to slipping into yet another war.

Tormented by this possibility, he published two books, “A Grammar of Motives” and “A Rhetoric of Motives,” in which he sought to to inoculate Americans from the sort of political speech that, in his view, could lead to a nuclear holocaust.

“The War of Words” was originally supposed to be part of “A Rhetoric of Motives.” But at the last minute, Burke decided to set it aside and publish it later. Unfortunately, he never ended up publishing it before his death in 1993.

The thesis of “The War of Words” is simple and, in our view, holds up today: Political warfare is ubiquitous, unrelenting and inevitable. News coverage and commentary are frequently biased, whether journalists and readers are aware of it or not. And all media coverage, therefore, demands careful scrutiny.

To Burke, you don’t have to launch social media missives in order to participate in sustaining a polarized political environment.

Instead, the quiet consumption of news reporting is enough to do the trick.

Most people might think that the content of media coverage is the most persuasive component. They assume what gets reported matters more than how it gets reported.

But according to “The War of Words,” this assumption is backwards: An argument’s form is often its most persuasive element.

Burke takes pains to catalog the various forms that news writers use in their work and calls them “rhetorical devices.”

One device he calls “headline thinking,” which refers to how an article’s headline can establish the tone and frame of the issue being discussed.

Take, for example, an Aug. 21 article The New York Times ran about how Michael Cohen’s indictment might affect the 2018 midterms. The headline read: “With Cohen Implicating Trump, a Presidency’s Fate Rests With Congress.”

The next day, the Times ran another article on the same topic with the following headline: “Republicans Urge Embattled Incumbents to Speak Out on Trump.”

Both headlines seek to assail the Republican Party. The first implies that the Republican Party, because it holds a majority in Congress, is responsible for upholding justice – and if they don’t indict Trump, they’re clearly protecting him to preserve their political power.

The second headline might seem less malicious than the first. But think about the underlying assumption: Republicans are only urging “embattled” elected officials to speak out against Trump.

The directive, therefore, isn’t born out of political principle. Rather, it’s being made because the party needs to preserve its majority and protect vulnerable incumbents. The unstated claim in this headline is that the Republican Party exhibits political virtue only when it’s needed to quell threats to its power.

Either way, the line is drawn: The New York Times is on one side, and the Republican Congress is on the other.

A rhetorical ‘call to arms’

Another device Burke explores is one that he calls “yielding aggressively,” which involves accepting criticism in order to leverage it to one’s own benefit.

We see this at play in an op-ed piece published on Fox News on Aug. 22, 2018. The writer, John Fund, concluded that Michael Cohen’s guilty plea will “likely” not lead to an indictment of President Trump.

To support his argument, he cites Bob Bauer, a former White House counsel to President Barack Obama, who has argued that the campaign finance violations aren’t very significant but are instead being used as a political cudgel.

Fund admits that Cohen’s guilty plea will hurt Trump and make things tougher for his supporters, requiring them “to do a lot of heavy lifting when they come to his defense.” Fund’s editorial also admits to minor lapses in Trump’s judgment – particularly in hiring Cohen, Manafort and Omarosa Manigault Newman. It thus yielded to popular criticisms of Trump.

But this admission is not a call for accountability; it is a call to arms. Fund ultimately argues that if Trump is indicted, it will not be because he is guilty of violating a serious law. It will be because his opponents seek to vanquish him.

Indictment or not, Fund seems to be saying, Trump supporters should be ready for a ferocious political fight come 2020.

Again, the lines are drawn.

How to survive the ‘war of words’

Burke once wrote about how rhetorical devices like those explored above can sustain division and polarization.

“Imagine a passage built about a set of oppositions (‘we do this, but they on the other hand do that; we stay here, but they go there; we look up, but they look down,’ etc.),” he wrote. “Once you grasp the trend of the form, [you see that] it invites participation regardless of the subject matter … you will find yourself swinging along with the succession of antitheses, even though you may not agree with the proposition that is being presented in this form.”

Burke calls this phenomenon “collaborative expectancy” – collaborative because it encourages us to swing along together, and “expectancy” because of the predictability of each side’s argument.

This predictability encourages readers to embrace an argument without considering whether we find it persuasive. They simply sit on one of two opposing sides and nod along.

According to Burke, if you passively consume the news, swinging along with headlines as the midterms unfold, political divisions will likely be further cemented.

However if you become aware of how the media reports you’re consuming seek to subtly position and influence you, you’ll likely seek out more sources and become more deliberative. You might notice what’s missing from a debate, and what really might be motivating the outlet.

To avoid getting sucked into a dynamic of two opposing, gridlocked forces, it’s important for all readers to make their consciousness a matter of conscience. 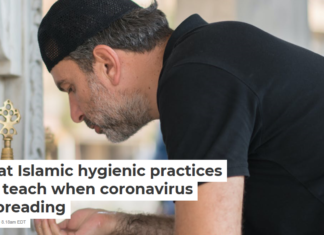 What Islamic hygienic practices can teach when coronavirus is spreading

Staff Writer - April 27, 2020
Rose S. Aslan, California Lutheran University As outbreaks of the coronavirus spread throughout the world, people are reminded over and again to limit physical contact,...

What’s at stake in China’s claims to the South China Sea?