When Russia invaded Ukraine, I responded like many Americans: by making charitable donations.

I was able to make my gift with confidence because I’m a scholar of nonprofits who has studied giving during disasters and other crises.

Mostly I’ve studied how charities help local communities after events like hurricanes and earthquakes, rather than war zones. But I’m also a human being, with friends and colleagues who are Ukrainian. Empathy and a personal connection to a cause are often what motivates donors to act.

You can wisely choose causes with the potential to do the most good in the middle of this humanitarian crisis by giving with your head as well as your heart. Here are the five guidelines I follow in my own giving decisions:

1) Send money to organizations, not strangers

Crowdfunding and social media fundraising campaigns have become so common that when I recently searched GoFundMe, it pointed me to 1,008 separate appeals for aid for individuals, families or causes related to Ukraine.

Most were posted by individuals, and I have no doubt that some will turn out to be fake.

2) Vet groups you’re unfamiliar with before donating to them

Verifying first that the cause is legitimate will make it easier to avoid funding scams.

A useful shortcut is to look for organizations that have been vetted by others. I tried a simple keyword search “Ukraine charities,” and that was enough to turn up some promising lists posted by media outlets.

A good place to start your sleuthing on U.S.-based registered charities is the Internal Revenue Service. It also ensures you’re giving to the right group, rather than another organization with a deceptively similar name. Many scammers abuse the name recognition of established nonprofits, hoping you won’t notice the difference.

3) Give to charities with a track record in Ukraine

Some examples include Razom for Ukraine, which leads a variety of cultural and democratization initiatives. Another is UNICEF, a United Nations agency that protects children worldwide and is in a good position not only to provide immediate relief but also to pressure Russia to allow unrestricted humanitarian access. Because these groups have already built local relationships, trust and infrastructure, they are likely to be more adept at operating in these dire circumstances than the charities popping up now or those that are still mobilizing from half a world away.

Don’t bundle up your spare clothing or other supplies and ship them to Eastern Europe, please. The fragile Ukrainian supply lines need to remain open for medicine and food. And while there is a time and place for restricting a gift to a specific purpose, a humanitarian crisis is not the right time. Trust the people that a charity has on the ground to know which needs are the highest priority.

5) Make gifts that reflect your values

Giving is a deeply psychological act. Effective – and satisfied – donors act on values important to them.

If helping refugees is your priority, consider organizations such as Fundacja Ocalenie, which means “the Rescue Fund” in Polish. About half a million Ukrainians had fled to Poland by March 3, 2022.

If a free press is what matters most to you, given the strength of the Russian disinformation machine, consider Zaborona or the Kyiv Independent, two Ukrainian media outlets.

A lot of guidance about what makes charities good or bad to support can be misleading.

One common piece of advice I recommend you ignore is that donors should always support charities that spend as little money as possible on their overhead costs – things like rent and administrative pay.

Even leading charity rating and assessment sites, such as Charity Navigator and the Better Business Bureau Wise Giving Alliance, continue to rely in part on the outdated assumption that nonprofits with low overhead spending are automatically more efficient and let donors’ dollars stretch further.

Researchers have been disproving this assumption for years.

Not only can reasonable amounts of overhead help nonprofits build their capacity, but many studies have demonstrated that pinching pennies to satisfy misguided donor assumptions can weaken nonprofits, especially in the long run.

Some charity-evaluation websites do provide valuable information. Charity Navigator has a helpful “advisory” page that alerts donors about nonprofit misconduct. But to research U.S. charities supporting the Ukraine crisis, I recommend Candid, formerly known as Guidestar. It evaluates charities on the basis of broader performance metrics, such as transparency, good governance practices and outcomes.

A better signal of effectiveness than low overhead will be a responsive organization with real humans who are ready to answer your questions. It should also have a track record of working well with others and clearly communicates how it spends donors’ dollars.

Groups worth supporting are also likely to emphasize their results in their annual reports and other materials. Especially if you intend to make a big gift, you may find that the charity’s 990 forms – paperwork the IRS requires – contain a lot of useful information.

In the end, I supported the International Committee of the Red Cross, the winner of several Nobel Peace Prizes. Based in Switzerland, it’s already operating in Ukraine, and can help today.

I hope that you will consider giving as well, and – like me – you’ll stick with your support. The need is going to continue long after Ukraine is out of the headlines. 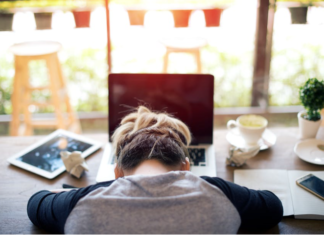 1 in 5 college students have anxiety or depression. Here’s why

Staff Writer - February 9, 2018
David Rosenberg, Wayne State University Many of us think of college as a wondrous time of new experiences and great freedom to explore new ideas...