When I am too hot at work I like to open a window, retrieve an ice lolly from the kitchen and kick off my shoes. But for many people, this is not an option. Finding the right temperature can make a big difference to how happy – and productive – we are at work. It can also be the cause of some serious arguments.

The idea of a perfect temperature though is something of a red herring. Research into workplace psychology shows that, ultimately, people just want to have a level of control over their environment.

Take Steve, for example. I interviewed him as part of a research project looking into people’s well-being at work. Commenting on the heat of an earlier August he said:

You watch the sun moving ‘round the office. When it gets to you, you know you’re going to cook like a Sunday joint. And it’s always sticky. We have to ask [the facilities management team] to get the temperature turned down, but by the time they’ve done it the weather’s changed and you’re bloody freezing instead.

Unions and official bodies advise ideal temperatures for various workplaces. So discomfort and bad performance, it would seem, lurk for organisations operating outside of a prescribed band on the thermometer.

There are even some rather unlikely claims that have been made for companies who hit the thermal sweet spot. A Cornell University study calculated that at 25℃ workers are 155% better at typing than those processing words at 20℃. That such a small shift in warmth accelerates the average worker from 90 to 230 words per minute seems pretty extraordinary.

Of course it may be tied to assertions that workplace temperatures are fixed in favour of men. These suggest that ideal operating temperatures were calculated in the male-dominated 1960s, when ambient environments were geared to perfection for 40-year-old men who weighed a little over 11st or 70kg. There was even a video that went viral, which made a joke about this:

But as a species, all human beings – dressed in everyday mixes of cotton, polyester and wool, and of all genders and ages – operate comfortably between about 14℃ to 25℃. Within that range, psychological research suggests, that there is no such thing as a single temperature that maximises productivity. Not all women like a warm room, not all men like a cool one and some 60-year-olds prefer to sit by an open window.

The way people feel about their environments is also largely influenced by their relationship to it. If you work in a large room where the management dictates where you sit, how you behave and what the temperature will be, for example, then your sense of autonomy will be reduced.

There’s a big range of temperatures in which humans can happily operate, yet the thermostat has the potential to cause irritation, complaint and even illness. The crucible for dissatisfaction and under-performance is clumsy organisational management.

The scientific evidence suggests that people should be allowed to choose their own ambient conditions. Retaining temperature control within the management sphere panders to financial myopia and treats staff like children. Costs saved by denying them simple choices are heavily outweighed by depressed productivity.

To test out the extent to which office environments boost productivity, my colleague Alex Haslam and I set up an experiment. We had people undertake the same tasks in the same comfortable, ergonomically excellent office. The temperature was unchanged throughout. But different groups were given different degrees of control over the space. The results differed radically.

In one condition, employees worked in office space that mirrored the standard, spartan, managerial model of the majority of large offices across the Western world. Ephemera was removed to eliminate distractions and focus minds on the jobs to hand. Other employees, in exactly the same space, were invited to put their own stamp on things by having control over arranging a number of pictures and plants around the office. We assessed people’s levels of productivity and comfort across the conditions.

Our results showed that people given a sense of control over their workspace saw levels of comfort increase by over 40%. Their productivity increased by 32%. Further, although the temperature was constant across the conditions, employees felt significantly hotter and colder (and sicker) when the space was lean and controlled by management, not themselves. Their productivity was consequently much poorer.

As I write this, it is 26℃ in my office; too warm according to guidelines. But I have set a fan whirring, opened windows and poured a cold drink. I couldn’t be more at ease. In Steve’s call centre the temperature will almost certainly be lower, but he will be feeling hot, bothered and powerless. Comfort and productivity lie not in the temperature but in having a sense of autonomy, of stamping your identity on your space. Perception changes all – even how hot it is. 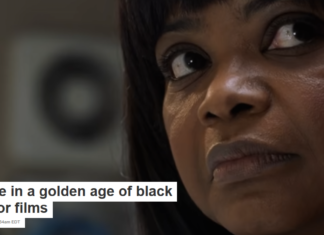 Staff Writer - May 29, 2019
Robin R. Means Coleman, Texas A&M University In the horror genre, black is definitely back. The movie “Ma,” which premieres on May 31, will star...

Paying with a palm print? We’re victims of our own psychology...