“Life is a losing proposition,” explains Mark Wahlberg’s literature professor/compulsive gambler Jim Bennett. “You might as well get it over with.”

Intent on doing just that, Bennett runs up massive debts to dangerous gangsters in this new incarnation of The Gambler, a re-make of James Toback’s 1974 film, itself an interpretation of a Fyodor Dostoyevsky novella. The newest version is the slightest of the three tellings, but its occasional successes kept me watching.

An advertisement for the 1974 version of The Gambler, which starred James Caan.
Geek Tyrant

With seven days to come up with $240,000, Bennett drains the family savings and is disowned by his mother. He leans on a student of his – a star basketball player – to shave points on a game. Moving from one underworld boss to another, he takes ever larger loans on ever harsher terms. Each time he gets staked, he gambles again. He mostly loses.

In its best moments, The Gambler is an effective re-make with some interesting twists. Jim Bennett ends up in a very different place than Axel Freed, the protagonist in the 1974 version. Toward the end of the movie, when Walhberg finally allows his natural likability to pierce the chilly exterior of the character, we hope he gets out of trouble. Brie Larson and John Goodman shine in supporting roles, offering Bennett the promise of redemption and the threat of annihilation, respectively. There’s an ethereal soundtrack and taut direction. In places, it’s reminiscent of Nicholas Winding Refn’s Drive, another modern anti-hero tale.

Each iteration of the gambler story raises the same question: why do these men of means risk everything? Dostoyevsky’s Alexei Ivanovich wanted the thrill of “dealing fate a blow on her cheek”; only by risking his life could he feel human: “behold, again I was a member of mankind.”

Dostoyevsky’s protagonist gambles to feel alive. Wahlberg’s gambling, on the other hand, is driven by his nihilism.
Open Library

Toback’s Axel Freed, played with snarling energy by James Caan, also sought to exert his will. “I like the uncertainty. The feeling that I might lose, but I won’t. Because I don’t want to.”

Wahlberg’s Jim Bennett is a more passive creature. He speaks not of exerting will over fate, but of not bothering to try. His gambling is driven by his nihilism.

Some elements of Bennett’s professorial ennui are believable. His one novel was well-reviewed but sold few copies. His major academic contribution is an innovative interpretation of Camus’ The Stranger, but the insight got buried in some now-forgotten textbook. These are frustrations many scholars will recognize.

The scenes of Wahlberg teaching class don’t ring true, though. We are told that he is bored with his job, his apathetic students and his mediocre colleagues. Yet we see him careening around the lecture hall, firing off bon mots on life, love, and literature. He knows the name and background of every student, peppering them with exhortations and insults, before settling his attention on one particular girl for an uncomfortably long exchange. By this time, the students would be thinking a lot of things, but “he seems bored” would likely not be one of them.

The fashionable verdict on this movie is that a viewer’s time would be better spent on the original. But there’s value in this telling of the story, too. The 1974 film has gained stature mostly in retrospect (it was largely overlooked at the time), and the tighter structure and more defined character arc in this new version will appeal to some.

The Gambler is a great human archetype, and stories as compelling as this can be told in more than one way. This isn’t the definitive telling of the tale, but Wahlberg’s gambler is distinctive enough to be worth betting a few hours of your time on. 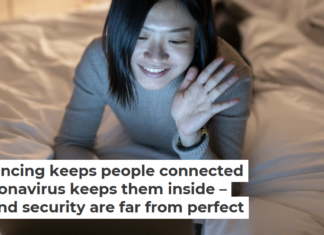 Staff Writer - April 11, 2020
Elizabeth Stoycheff, Wayne State University If, before COVID-19, you were concerned about all the data that technology companies had about you, just wait. As stay-at-home...

New technology could spell the end of the size zero model