President Donald Trump tweeted this week that he would order the Department of Justice to investigate whether the FBI, under President Barack Obama, had “infiltrated or surveilled” his presidential campaign “for political purposes.”

Trump was referring to the FBI’s use of an informant to gather information in its probe of Russian interference in the 2016 election.

The president described this informant as a “spy” who was “placed” in his campaign. Trump also framed the entire episode employing a Watergate suffix, calling it “spygate.” He has claimed it could be “one of the biggest political scandals in history.”

As an FBI historian, I believe an examination of how the FBI has handled and used informants in the past will shed light on this current controversy.

Informants get the information

The FBI does not “place” or insert informants, as it would do with undercover FBI agents. Informants are people who are already in a position to know or learn information and who willingly cooperate with the FBI. Most often, informants cooperate because they’re concerned with something they’ve seen or heard.

In writing my book “Hoover’s War on Gays: Exposing the FBI’s “Sex Deviates” Program,“ I uncovered the identities of many FBI informants. Sometimes, they seek out the FBI and offer their services to an FBI agent handler out of concern for what they’ve seen. Such was the case with Dr. Alfred Gross, who had previously worked with the FBI and who in 1952 regarded a gay civil rights group he met as threatening because he viewed them as mentally ill.

Others became informants because they were strong anti-communists during the Cold War, like Warren Scarberry, an informant I uncovered who believed he saw in the Mattachine Society of Washington the work of Communists. He called and visited the FBI about this.

Still others acted out of a personal sense of patriotism or were criminal conspirators looking for a deal with prosecutors. Informants run the spectrum of motivations, from selfless to selfish.

It’s unsurprising, then, the FBI used Halper in its counterintelligence probe. Most significantly, he happened to have been in a unique position where he had connections to Trump campaign officials who all had different types of Russian contacts. These included Trump campaign co-chair Sam Clovis and Trump foreign policy advisers Michael Flynn, Carter Page and George Papadopoulos.

Today’s FBI does not practice political espionage at the behest of presidents or anyone else, and informants are not part of anything like that. There are investigative guidelines and congressional oversight mechanisms to prevent it. That was not always true: During the tenure of FBI Director J. Edgar Hoover (1924-1972), the FBI conducted unchecked political surveillance operations. The Hoover FBI also used informants in these efforts to monitor, for example, FDR’s foreign policy critics, civil rights leader Martin Luther King Jr., student radicals and the anti-war movement, and to keep tabs on the LGBT community.

Hoover’s actions were violations of Americans’ civil liberties and the trust placed in law enforcement. Precisely because of these Hoover-era abuses, special investigative regulations were put into place about the use of informants in the 1970s.

If an FBI probe is particularly sensitive and potentially involves “a greater risk to civil liberties,” then FBI agents are required to seek higher levels of authorization for their use. In the Hoover era, there was little to no oversight in the use of informants, let alone more intrusive investigative techniques. Today’s FBI is not the Hoover FBI.

Yet even during the Hoover years, informants were key to more standard FBI national security investigations.

The FBI captured Russian spy Rudolf Abel — who was portrayed in the 2015 Tom Hanks film “Bridge of Spies” — because an FBI informant within Abel’s circle, named Reino Haynaham, talked. In 1965, the FBI quickly apprehended the murderers of civil rights activist Viola Liuzzo in Alabama because it had a paid informant within the Ku Klux Klan, Gary Thomas Rowe Jr.

It is no surprise, then, that FBI officials used a confidential human source in its counterintelligence probe about Russian election meddling.

The informant was in a position to gather information early in the FBI investigation. That basic information undoubtedly was then further developed and enhanced with more traditional documented sources, as is evidenced by the fact that both Michael Flynn and George Papadopoulos pleaded guilty and are now cooperating with the Mueller investigation.

What we see in today’s example is less about spying than a glimpse into how FBI national security investigations operate and unfold – and how they can sometimes be politicized. 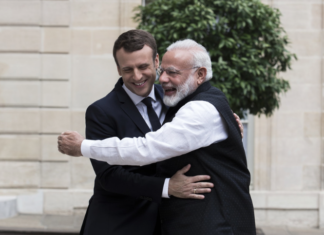 Staff Writer - June 9, 2017
Arun Agrawal, University of Michigan On June 3, two days after President Trump announced that the United States would withdraw from the Paris climate accord,...