As Donald Trump began speaking in Warsaw at noon on July 6, I was sitting in my apartment a few blocks away.

Police helicopters kept buzzing past my building, and nearly all the main streets were blocked off. A government-sponsored “picnic” was being staged in a field near the National Stadium to celebrate Trump’s visit, and supporters of the ruling party had been bused in. That sort of artificial display of enthusiasm is necessary because Trump is definitely not popular here.

This visit has sparked familiar stories about Poland being the most pro-American country in Europe. CNN ran a story depicting Poland and its neighbors as inherently friendly to Trump’s brand of far-right nationalism.

I’ve been writing about Polish history for nearly 30 years, so I wasn’t at all surprised by this. It fits with the often repeated argument that the former Soviet bloc countries were never truly ready to accept the liberal democratic norms of the more “civilized” West.

It is hard for me to imagine how this could be true. Given the deep distrust of Trump among European leaders, and the overall contempt with which he is viewed across the continent, the only possible outcome of Trump’s visit is to further Poland’s isolation within the European Union.

Here’s the problem as I see it: The Polish government is giving ammunition to entrenched stereotypes about Poles as backward, undemocratic, bigoted and uncultured. And the Western press, while extremely critical of Kaczyński’s assault on European norms, creates a feedback loop for his claim that he represents the true Poland.

In the 2015 elections, Kaczyński won 38 percent of the vote. He was able to transform that support into a parliamentary majority only because the left and center-left were fragmented among several small parties. In Poland, parties getting fewer than 5 percent receive no delegates. Their votes are distributed among the larger parties.

The popularity of the ruling party hasn’t risen since the election. For most of the past year it has slid even lower. If we add in a second right-wing party called “Kukiz 15” that generally supports the government’s policies, the right is still supported by less than half of the Polish population.

Even to assert that Donald Trump is more popular in Poland than elsewhere in Europe is misleading. During the U.S. elections, a survey asked Poles whom they would prefer to see in the White House. Only 20 percent chose Trump. After the election, a “whopping” 13 percent felt that Trump’s victory would be good for Poland. Yes, these figures are indeed higher than the 9 percent popularity rating that he enjoys in Europe overall, but they hardly paint a picture of Poland as a friendly place for the U.S. president.

Placed in an American context, Trump’s approval rating is higher in California than it is in Poland.

In general, Poles are more conservative than most West Europeans, but that’s relative. The American right should not hold any delusions: Their worldview might be echoed in the government offices of Warsaw under the current leadership, but their support is only marginally greater along the Vistula than it is along the Thames, the Seine or the Rhine.

The current Polish government is trying to pull the country away from Europe. Reinforcing anti-Polish attitudes in the western part of the continent might help them succeed. But let’s not forget that those attitudes are based on stereotypes that do not reflect the totality, or even the majority, of today’s Poland. 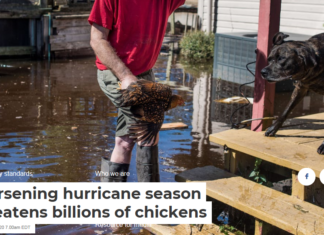 Staff Writer - October 16, 2020
Tom Tabler, Mississippi State University CC BY-SAHurricanes can have devastating consequences for both residents and businesses in their path. And one sector that’s particularly exposed...