Theo Tzanidis, University of the West of Scotland

When Jack Dorsey made the sudden public announcement that he had quit as CEO of Twitter, it was only ever going to have happened in one place – Twitter itself. It reminded me very much of Elon Musk’s entertaining tweet adventures, as Dorsey tossed his resignation letter onto the social media platform that he co-founded. You could imagine him sitting back to soak up the theatre of reaction and speculation that unfolded.

This isn’t Dorsey’s first resignation letter to Twitter – he was forced out of the CEO chair in 2008 only to return as executive chairman three years later – and no one can say for sure if it will be the last.

According to the email sent to Twitter staff in which he announced his latest resignation, he thinks the firm should “stand on its own, free of its founder’s influence or direction”. In the ensuing tweet storm after he then put the news on Twitter, he insisted it had been his decision. So what does it all add up to?

Dorsey’s move was not entirely unexpected. For more than a year, he has been under intense pressure from activist investors to accelerate Twitter’s development and improve its financial performance.

Wall Street investors have criticised Dorsey’s outside interests, which include running payments giant Square, which he founded during his last Twitter exile, as well as pursuing futuristic projects centred around decentralising (meaning removing traditional corporate control from) the internet and finance. Notably, Twitter’s share price shot up with the announcement, only to be pulled down with the rest of the market as it worries about the COVID omicron variant.

I sense a similarity here between Dorsey and other digital moguls such as Jeff Bezos and, once again, Musk. Like Dorsey, Bezos and Musk both run two companies in Amazon/Blue Origin and Tesla/SpaceX respectively, as well as seeking different forms of excitement and adventure, with Bezos’ efforts to reach space orbit and Musk sending a Tesla Roadster sports car into space. It all seems to signify mega-tech founders becoming dissatisfied with the monotonous management of their most famous companies and looking for something more.

In the case of Twitter, there is also the social-media dimension. Platforms like Twitter, Facebook and YouTube are increasingly burdened by political controversy and complex issues such as disinformation, privacy breaches and hate speech. Twitter, for example, became the megaphone of choice for Donald Trump before later banning him, and is having to wrestle with hate speech as a global issue. It is sometimes said that these companies are facing a social media midlife crisis.

There are no simple solutions, so it makes sense that someone like Dorsey might get more thrilled by creating novel things than mending existing ones. It might make sense to hand over control of your empire to others and set off in quest of new horizons.

Dorsey’s reference to “founder ego” in his farewell message to Twitter and staff can only be interpreted as a poke at Mark Zuckerberg, who has shown no signs of relinquishing control over Facebook/Meta. On the contrary, he is looking to further develop the company’s influence by upgrading its operations to a more a virtual reality version of the internet known as the metaverse or 3Dweb.

When Facebook made its historic announcement in October that it was rebranding as Meta, Dorsey’s tweets hinted at his disapproval of Zuckerberg’s decision to stay on. Despite Dorsey insisting this week that he loves Twitter, I suspect he sees difficult times ahead for social media companies and even the concept of these “traditional” platforms.

In my view, the days are gone when young developers wanted to work for Google, Facebook or Twitter. They now seem more interested in “flipping” NFTs (buying and selling these digital collectibles for a quick profit) and writing applications for the (non-Meta) metaverse. Meanwhile, regulators are increasing the heat on Silicon Valley’s old guard over their ethical standards around content and use of data. And if the metaverse is the future, it raises questions about exactly how a microblogging platform with a narrow user-base fits into this new 3D era.

What next for Jack

While Dorsey has handed control of Twitter to 37-year-old chief technology officer Parag Agrawal, he will have more time to focus on Square. The payments firm is valued at nearly US$100 billion (£75 billion) – more than double Twitter – and one of its main focuses has been to move cryptocurrencies into the mainstream.

Square has bitcoin on its balance sheet and is planning to launch a decentralised crypto exchange called tbDEX, as well as potentially moving into bitcoin mining (the creation of new bitcoin). Dorsey is also an angel investor in numerous other projects, including music streaming app Tidal, in which rapper Jay Z is a co-investor.

They are dominated by eccentric geniuses such as Uniswap creator Hayden Adams and MakerDao’s Rune Christensen, who have unusual backgrounds and voracious appetites for risk. It will look like an appealing landing site for burned-out tech professionals trying to rekindle their optimism.

As I always say to my students, we are living in an age of acceleration, where technology is developing at a rate faster than what any individual can keep up with. To survive this, we need a new way of thinking about technology.

Silicon Valley CEOs like Jack Dorsey were the catalysts for this era, and now they too have to adapt and reinvent the very world they created. Dorsey has the advantage that he has had one foot in this new camp for some time. His departure does not give me a great deal of confidence in traditional social media, but it could give added impetus to crypto and tech start-ups.

Theo Tzanidis, Senior Lecturer in Digital Marketing, University of the West of Scotland 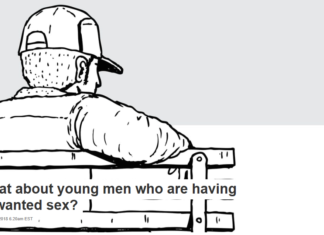 What about young men who are having unwanted sex?

The 50 biggest US donors gave or pledged nearly $28 billion...