“All the world’s a stage,” Shakespeare once wrote.

In recent weeks, that Shakespearean adage has been particularly resonant, with the New York Public Theater’s production of “Julius Caesar” attracting worldwide scrutiny because of the staged likeness between Caesar and President Trump.

Extolling the play as a masterpiece about power and political violence, director Oskar Eustis persuasively defended his interpretation as a warning about “what happens when you try to preserve democracy by nondemocratic means.”

Others, however, questioned whether this production was in good taste – and denounced it for encouraging violence against President Trump, particularly the scene in which Caesar is stabbed to death. Due to the backlash, Delta Airlines and Bank of America withdrew their corporate sponsorship.

In some ways, the contention – even rancor – of these debates about the Public Theater production would have delighted, and perhaps bemused, Shakespeare. They articulate the richness and urgency of our own democratic struggles – similar to the rich political complexity reflected in Shakespeare’s text itself.

As Shakespeare wrote the play, he drew on Roman history, a popular topic in 16th-century England. But he was also commenting on the political conflicts of the era. The power struggles depicted in “Julius Caesar” mirrored ongoing concerns in England with legitimacy, tyranny and potential threats of rebellion and deposition against Queen Elizabeth I, who did not have an heir. These anxieties were also exacerbated by historical memories of the English Civil War, also called the War of the Roses, going far back as the deposition and death of Richard II.

Shakespeare’s Rome is a place of brutal struggles between democratic ideals and human ambition. The assassination of Caesar is one of the most important events in Roman history, and Shakespeare had inherited over 1,600 years of ambiguity, with little consensus over whether Caesar’s killing was justified. He incorporated these debates into his play, offering his viewers multiple perspectives on the characters. Caesar is either a heroic, benevolent ruler or tyrant; Brutus is either a patriot or assassin.

Shakespeare’s Caesar is clearly a leader and politician with power – including some vanity and propensity to flattery – but also with wide popular appeal. When he returns triumphant from wars, the conspirators fear he will become a tyrant, a “Colossus” whereby the “wide walls” of Republican Rome “encompass’d but one man.”

Yet he seems to love and trust his fellow Romans, warmly inviting Brutus and other conspirators to share wine. And we also learn he bequeaths to his people, on his death, his personal possessions: To every Roman citizen he gives “seventy-five drachmas” and “all his walks, His private arbours and new-planted orchards” for public use.

Shakespeare also gives Brutus, the leader of the assassination plot, a refined conscience throughout the play. It’s evident in the many discussions Brutus has with his fellow conspirators, and it’s summed up when he describes his motivation for killing Caesar: “If then [any] friend demand why Brutus rose against Caesar, then my answer: Not that I loved Caesar less but that I loved Rome more.”

“Julius Caesar” offers a complicated, even poignant vision at the end. It ends in civil war and the defeat of the conspirators, following their internal dissensions and accusations of betrayal. Brutus commits suicide, but Mark Antony and Octavius, Julius Caesar’s grandnephew, victorious at the end, acknowledge Brutus’s nobility and wish to bury him with honor. Toward the close of Shakespeare’s next Roman play, “Antony and Cleopatra,” we see Octavius Caesar emerge as the singular ruler of Rome. Importantly, then, the Republican, democratic ideal is defeated, both in the play and in the Western world (until the American Revolution).

Overall, this picture of a divided Rome – a mix of power politics, of stoic ideals giving way to ego – should give pause to modern audiences. From the shifting perspectives on competing ambitions we learn that all rigid value judgments of “good” and “evil” politicians can be relative – and problematic – in our contingent world.

Yet, the ideals of democracy – in Rome and in our own times – have to be constantly guarded against demagogues, who also may be idealists, of all political stripes. Productions of “Julius Caesar” have typically evoked topical political analogies. Even seemingly traditional, period productions, such as the current Royal Shakespeare Company’s version in Britain, resonate with topical relevance, enabling the audience to deduce connections to today’s political climate.

It may be true – as some have suggested – that the analogy between Julius Caesar and Donald Trump is a bit forced. Regardless, the production is, as one reviewer put it, “a deeply democratic offering, befitting both the Public and the public – and the times.”

As a researcher and teacher of Renaissance drama, I’ve studied Shakespeare’s role as a cultural icon across different societies, cultures and eras. It seems that no matter where (and when) his works are being performed, they provide us with a complex, poetic language for imagining and interpreting the intractable world in which we live.

During politically contentious times, it’s befitting that we turn more – rather then less – to Shakespeare. 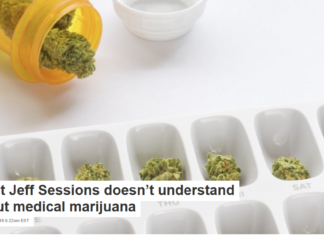 Worry over kids’ excessive smartphone use is more justified than ever...