“Jurassic World: Dominion” is hyperbolic Hollywood entertainment at its best, with an action-packed storyline that refuses to let reality get in the way of a good story. Yet just like its predecessors, it offers an underlying cautionary tale of technological hubris that’s very real.

As I discuss in my book “Films from the Future,” Stephen Spielberg’s 1993 “Jurassic Park,” based on Michael Crichton’s 1990 novel, didn’t shy away from grappling with the dangers of unfettered entrepreneurship and irresponsible innovation. Scientists at the time were getting closer to being able to manipulate DNA in the real world, and both book and movie captured emerging concerns that playing God with nature’s genetic code could lead to devastating consequences. This was famously captured by one of the movie’s protagonists, Dr. Ian Malcolm, played by Jeff Goldblum, as he declared, “Your scientists were so preoccupied with whether they could, they didn’t stop to think if they should.”

In the latest iteration of the “Jurassic Park” franchise, society is coming to terms with the consequences of innovations that were, at best, ill-conceived. A litany of “coulds” over “shoulds” has led to a future in which resurrected and redesigned dinosaurs roam free, and humanity’s dominance as a species is under threat.

At the heart of these films are questions that are more relevant than ever: Have researchers learned the lesson of “Jurassic Park” and sufficiently closed the gap between “could” and “should”? Or will the science and technology of DNA manipulation continue to outpace any consensus on how to use them ethically and responsibly? https://www.youtube.com/embed/NkEU6fC_nhY?wmode=transparent&start=0 Imagine a world where dinosaurs and humans coexist.

The first draft of the human genome was published to great fanfare in 2001, setting the stage for scientists to read, redesign and even rewrite complex genetic sequences.

However, existing technologies were time-consuming and expensive, placing genetic manipulation out of reach for many researchers. The first draft of the human genome cost an estimated US$300 million, and subsequent whole-genome sequences just under $100 million – a prohibitive amount for all but the most well-funded research groups. As existing technologies were refined and new ones came online, however, smaller labs – and even students and “DIY bio” hobbyists – could experiment more freely with reading and writing genetic code.

In 2005, bioengineer Drew Endy proposed that it should be possible to work with DNA the same way that engineers work with electronic components. Much as electronics designers are less concerned with the physics of semiconductors than they are with the components that rely on them, Endy argued that it should be possible to create standardized DNA-based parts called “biobricks” that scientists could use without needing to be experts in their underlying biology.

Endy’s and others’ work was foundational to the emerging field of synthetic biology, which applies engineering and design principles to genetic manipulation.

Scientists, engineers and even artists began to approach DNA as a biological code that could be digitized, manipulated and redesigned in cyberspace in much the same way as digital photos or videos are. This in turn opened the door to reprogramming plants, microorganisms and fungi to produce pharmaceutical drugs and other useful substances. Modified yeast, for example, produces the meaty taste of vegetarian Impossible Burgers.

Despite increasing interest in gene editing, the biggest barrier to the imagination and vision of the early pioneers of synthetic biology was still the speed and cost of editing technologies.

Then CRISPR changed everything.

In 2020, scientists Jennifer Doudna and Emanuelle Charpentier won the Nobel Prize in chemistry for their work on a revolutionary new gene-editing technology that allows researchers to precisely snip out and replace DNA sequences within genes: CRISPR.

CRISPR was quick, cheap and relatively easy to use. And it unleashed the imagination of DNA coders.

More than any previous advance in genetic engineering, CRISPR enabled techniques from digital coding and systems engineering to be applied to biology. This cross-fertilization of ideas and methods led to breakthroughs ranging from using DNA to store computer data to creating 3D “DNA origami” structures.

CRISPR also opened the way for scientists to explore redesigning entire species – including bringing back animals from extinction.

Gene drives use CRISPR to directly insert a piece of genetic code into an organism’s genome and ensure that specific traits are inherited by all subsequent generations. Scientists are currently experimenting with this technology to control disease-carrying mosquitoes. https://www.youtube.com/embed/KgvhUPiDdq8?wmode=transparent&start=0 Gene drives have the potential to alter the genetic makeup of an entire species.

Despite the potential benefits of the technology, gene drives raise serious ethical questions. Even when applied to clear public health threats like mosquitoes, these questions are not easy to navigate. They get even more complex when considering hypothetical applications in people, such as increasing athletic performance in future generations.

Advances in gene editing have also made it easier to genetically alter the behavior of individual cells. This is at the heart of biomanufacturing technologies that reengineer simple organisms to produce useful substances ranging from aviation fuel to food additives.

Since the beginning of the pandemic, there have been rumors that the virus that causes COVID-19 resulted from genetic experiments gone wrong. While these rumors remain unsubstantiated, they’ve renewed debate around the ethics of gain-of-function research.

Gain-of-function research uses DNA editing techniques to alter how organisms function, including increasing the ability of viruses to cause disease. Scientists do this to predict and prepare for potential mutations of existing viruses that increase their ability to cause harm. However, such research also raises the possibility of a dangerously enhanced virus’s being released outside the lab, either accidentally or intentionally.

At the same time, scientists’ increasing mastery over biological source code is what has allowed them to rapidly develop the Pfizer-BioNTech and Moderna mRNA vaccines to combat COVID-19. By precisely engineering the genetic code that instructs cells to produce harmless versions of viral proteins, vaccines are able to prime the immune system to respond when it encounters the actual virus.

Prescient as Michael Crichton was, it’s unlikely that he could have envisioned just how far scientists’ abilities to engineer biology have advanced over the past three decades. Bringing back extinct species, while an active area of research, remains fiendishly difficult. However, in many ways, our technologies are substantially further along than those in “Jurassic Park” and the subsequent films.

But how have we done on the responsibility front?

Fortunately, consideration of the social and ethical side of gene editing has gone hand in hand with the science’s development. In 1975, scientists agreed on approaches to ensure that emerging recombinant DNA research would be carried out safely. From the get-go, the ethical, legal and social dimensions of the science were hard-wired into the Human Genome Project. DIY bio communities have been at the forefront of safe and responsible gene-editing research. And social responsibility is integral to synthetic biology competitions. https://www.youtube.com/embed/12VfS2hAi7c?wmode=transparent&start=0 DNA was never destiny.

Yet as gene editing becomes increasingly powerful and accessible, a community of well-meaning scientists and engineers is unlikely to be sufficient. While the “Jurassic Park” movies take dramatic license in their portrayal of the future, they do get one thing right: Even with good intentions, bad things happen when you mix powerful technologies with scientists who haven’t been trained to think through the consequences of their actions – and haven’t thought to ask experts who have.

Maybe this is the abiding message of “Jurassic World: Dominion” – that despite incredible advances in genetic design and engineering, things can and will go wrong if we don’t embrace the development and use of the technology in socially responsible ways.

The good news is that we still have time to close the gap between “could” and “should” in how scientists redesign and reengineer genetic code. But as “Jurassic World: Dominion” reminds moviegoers, the future is often closer than it might appear. 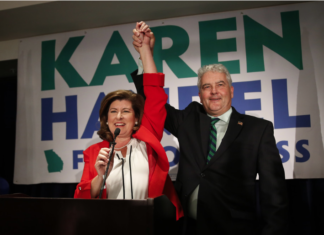 Most expensive race in House history turns out nearly 58 percent...

5 things new graduates should do to plan their careers

The womb isn’t sterile – healthy babies are born with bacteria...