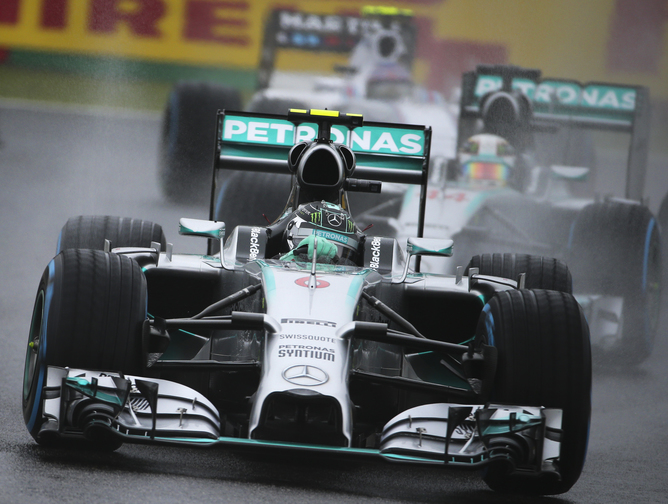 In 2014, Mercedes became the first German team to secure the Constructors’ World Championship title, the award for the most successful Formula 1 outfit over a season. Lewis Hamilton and Nico Rosberg delivered 18 pole positions, 16 wins and 31 podium finishes. This success on the track has gone hand in hand with technical innovations and financial gains, which is prompting rivals to respond. Now, rumours are afoot that the Volkswagen Group – Mercedes’ arch German rival – is also considering entering the glitzy, high-powered world of F1.

Some readers may smile wryly at the thought of the Beetle and Polo’s manufacturer competing at the pinnacle of world motor sport. But the VW Group owns a broad portfolio of companies which include Audi, Bugatti, Bentley, Lamborghini, Porsche, Skoda, Seat and, of course, VW.

For several years, the group has been active in both rallying (through its VW brand) and endurance racing (through Audi). Audi has been particularly successful, most notably winning the last five Le Mans 24 Hour races and 13 in total since 2000. Yet these do not have the global presence or profile of F1, nor the kudos or status.

Even as global television audiences fall, by as much as 50% in some markets, F1 remains a seductive proposition for car manufacturers. Races are staged across all five continents, generating a television viewership of 450m people. And many of these viewers are in economic hotspots such as the BRIC countries, as well as the likes of the UAE and Bahrain; mineral-rich Azerbaijan is also pursuing the right to stage an F1 race.

While the global advertising value of the Mercedes F1 team’s TV appearances during 2014 is identified to have been worth US$2.8 billion, the VW Group and its sports and touring car operations are thought to be worth only about US$30m. Then there is the value that F1’s popularity brings for sponsors – Mercedes reportedly generated US$1.5 billion in advertising value for its sponsors in 2014 (US$450m for Petronas and US$400m for Daimler).

And as the team’s head of communications, Bradley Lord, has pointed-out: “Mercedes-Benz sells 93% of its passenger cars in countries which hold F1 races.” So, as long as the enduring glamour and appeal of F1 remains, the sport will continue to play a role in strengthening perceptions that the brands is sporty, sexy and dynamic.

Competing in the high-octane world of F1 brings other benefits too. Mercedes designed its 2014 Championship contender with tremendous ingenuity. The turbine and air compressor were situated at either end of their cars’ engines, resulting in better aerodynamic efficiency of the team’s F1 machines.

In a world where technical innovation is an obsession, not just in F1 but across the motoring industry in general, these kinds of achievements are important. Not only do they signify a company operating at the cutting-edge of technology, but also one that is exploring ways to diffuse the knowledge gathered in F1 across its other product ranges, leading to better cars for domestic consumers.

So, as Mercedes literally and metaphorically powers ahead on the tracks and, by implication, the domestic roads of the world, its rivals must respond. Renault and Ferrari will surely present a more competitive threat to Mercedes during 2015, while Honda returns to F1 for the first time since 2008. And, with the VW Group management believed to have taken a strategic decision to withdraw from endurance racing and from its major commitment to the German Touring Car series, it seems increasingly likely that we are set for a return to the classic 1950s battle between Audi and Mercedes.

In spite of the huge revenue that F1 brings, the outgoings are steep – for all its success, Mercedes is one of the most unprofitable teams in F1, having recorded losses during the last financial year of almost US$100m. There is also continuing uncertainty over the World Championship’s ownership and questions about the sport’s future, as well as continuing economic problems in Europe compounding difficulties with F1’s declining TV audiences.

So VW moving into the sport at this point in time would be intriguing. That a close forecourt rival appears to be racing ahead on the track is one reason; VW putting two Audi cars on the 2016 starting grid would at least appear to be a strategic response to Mercedes – copying a competitor’s actions is commonplace in business.

Yet there are also image issues too. The VW Group is currently participating on the margins of world motorsport, in events that emphasise staying-power and technical efficiency rather than cutting-edge performance and glamour. By becoming involved in F1, Audi will enhance its status as a much sexier brand, associated with exclusivity and prestige, and be thrust into the consciousness of global car consumers.

An additional aspect of F1’s appeal is the way in which it leads to technological developments which then diffuse across engine and vehicle manufacturers, ultimately benefiting domestic car buyers. Indeed, both Mercedes and Renault have already identified how last season’s race car technology is being used to develop better road car models.

F1 therefore serves as test-bed for manufacturers such the VW Group, taking place in lieu of the research and development activities that might normally occur in a design studio. Such real world applications are especially important for Audi which has, over several decades, developed a reputation for being at the cutting-edge of motor vehicle technology.

The showbiz pizazz of F1 is seductive, but hard business decisions must be made for companies to compete in sport at this level. Technological developments and marketing benefits are at the heart of Audi’s decision to race in F1. But with the likes of Ferrari running a team at an annual cost of around US$400m, Grand Prix racing does not come cheap. The return on this investment must be alluring enough for the VW Group to consider lining up on the grid. By the end of the 2016 F1 season, perhaps we will have evidence of just how effective the company’s strategy has been.

Staff Writer - November 3, 2014
By Claire Drummond, Flinders University How many times have we heard that breakfast is the most important meal of the day? There’s overwhelming evidence to...